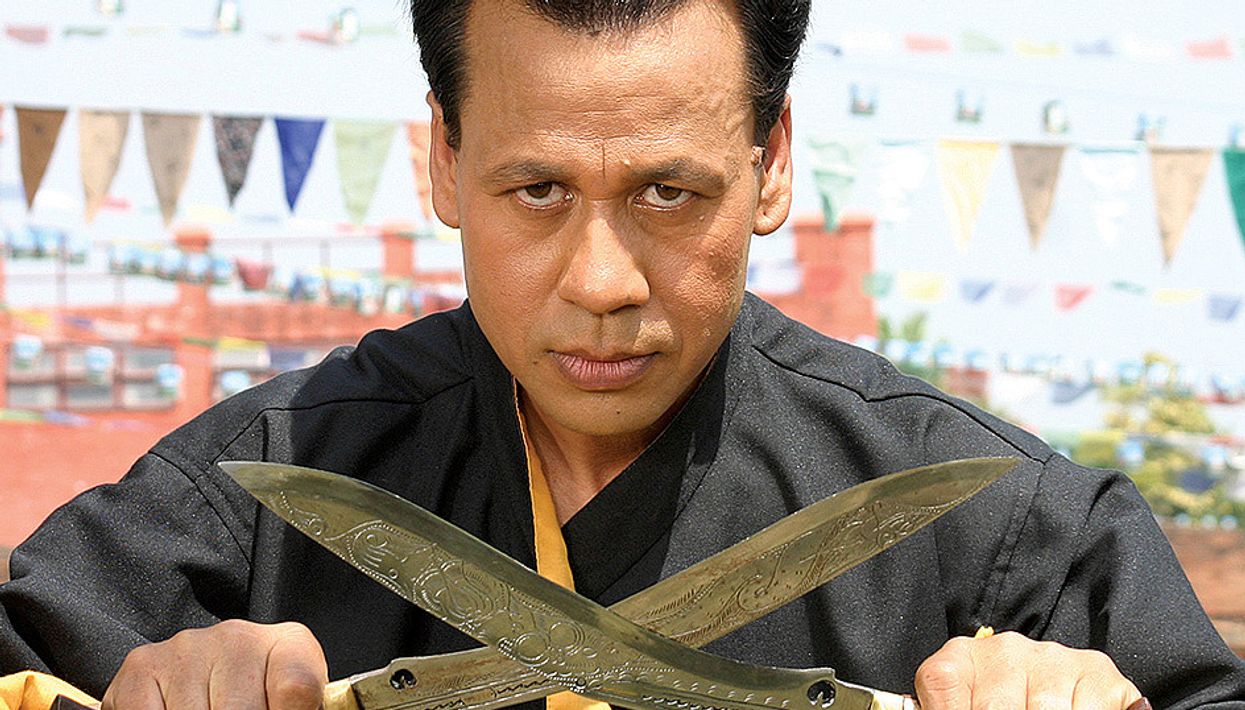 Traditionally, it was said that once a kukri (also spelled khukuri) was drawn in battle, it had to taste the blood of the enemy. If that didn't happen, the Gorkha was expected to cut part of his own body before returning the blade to its sheath.

Then and now, bravery and honesty are qualities inherent in the Gorkhas (also spelled Gurkhas). When engaged in combat, they are renowned for doing what's physically and mentally necessary to protect their nation or the ally for whom they are fighting. In hand-to-hand combat, their intellect becomes as sharp as a kukri, and at that point, they become almost fearless.

“I never saw more steadiness or bravery exhibited in my life," a British officer named John Shipp said of the Gorkhas in 1816. “Run they would not, and of death they seemed to have no fear."

The Gorkhas have been so effective in battle in part because of the kukri. The inward curvature of the blade means that the wielder need not bend his wrist when chopping. Furthermore, the thick, heavy blade has a center of gravity that's substantially forward of the handle, which augments the transfer of energy.

Because of the weapon's weight — 1 to 2 pounds on average — the edge of the blade slides across the surface of the target while its mass maintains momentum, causing it to slice through the target instead of merely cutting it. The result is a penetrative force that's disproportional to the knife's length, which is usually 16 to 18 inches.

In the days of the British Empire, the country was dedicated to establishing and maintaining colonies around the world. In 1815 Britain attacked Nepal, the nation that popularized the kukri, for the first time. On every occasion that they tried to subdue the Himalayan kingdom, they were defeated. Having failed to take over Nepal, the British signed a treaty with the Nepali government in 1816, after which they started recruiting Gorkhas to fight for them.

In the mid-1800s, Britain was having problems with the Mogul Empire in India. The British military used Gorkha troops to end a mutiny and capture the Mogul emperor. That further exposed the efficacy of the kukri to the world — and won the respect of British soldiers.

In the ensuing years, the kukri saw combat in numerous conflicts. One of them was World War I, when the Gorkhas fought alongside the British in Europe. It marked the first time Gorkha warriors experienced combat outside their native South Asia. Many found it difficult to adapt to the new environments that France and Persia, now Iran, presented, but they fought with bravery, often using their kukri to dispatch their enemies.

Also during World War I, the Gorkhas engaged the Turks in what became known as the Gallipoli Campaign. Although the Gorkhas had to endure all kinds of adverse conditions — including extreme cold, unfamiliar terrain and the introduction of trench warfare — they fought with honor, which only added to the reputation built by their predecessors. The kukri likewise continued to build a reputation, in part because of the role it played in the hand-to-hand combat that was required to enter and then capture heavily guarded Turkish positions.

During World War II, the Gorkhas and the kukri again saw combat. At a Burmese stronghold, 200 Japanese soldiers attacked the Gorkha trenches, primarily with hand grenades. A Gorkha named Lachhiman Gurung picked up two grenades and threw them back into the Japanese trenches. When he grabbed a third one and was about to hurl it back, it exploded, destroying his right hand. He proceeded to pull out his kukri and thrust it into the ground, shouting to the Japanese that none of them would make it past the knife alive.

Around the same time, a man named Bhanubhakta Gurung is recorded as having fought against the Japanese in Burma. Armed only with his kukri, he killed two enemy soldiers. And in 1943, Col. Peter Jones was tasked with leading a battalion of Gorkhas against a German unit. At one point, Jones fought alongside his men using a kukri. He was wounded in the neck, but that didn't stop him from defending himself and his troops.

Fast-forward to 2010: In Afghanistan, a sergeant named Dipprasad Pun, having run out of ammunition, killed 30 Taliban troops in less than an hour with his kukri. Also in 2010 a retired Gorkha named Bishnu Shrestha proved the effectiveness of the kukri on a train in India. When 40 robbers forced the train to stop so they could rob the passengers, Bishnu used his knife to kill three of them and injure eight others. The rest of the criminals fled.

My retelling of these historical incidents should not be interpreted as evidence that the kukri is nothing but a weapon of war. While it's true that in the beginning, the Gorkhas learned the art of the kukri only for killing, as time passed, they viewed the knife as a tool for disarming and disabling, as well. They began to engage their minds in their training so they could use the full functionality of the weapon to minimize bloodshed whenever possible.

Nowadays, kukri training entails instruction in the concept that the human mind has four dimensions: In Sanskrit, they are bhudhi, ahankara, manas and chitta.

Ahankara refers to identity. The day a person is born, he or she identifies only with “I." As the person grows older, he or she is connected to a particular culture, belief, race, creed or nation. As long as the person respects other people's identities, he or she will live in peace and harmony. So it is with the Gorkha warrior.

Manas refers to memory. Human memory is an accumulation of data or information from the past. When people are born, they start gathering memories. Memories are also transmitted from generation to generation through language and literature. When you think about it, civilization and culture are just shared memories.

When people's minds are corrupted with negative memories, they cannot see anything the way it is. They see things only as they appear to be. These “mind memories" may seem more real than reality. All people are influenced by the memories they have gathered in life; there's nothing wrong with that. But if they get so emotionally involved in memories of certain beliefs that they inflict violence on others, it is no longer good. The student of the kukri always seeks to avoid that fate.

Chitta refers to consciousness. People are born with awareness. This fundamental form of consciousness is only enough for survival. If they want to go beyond mere survival, they must consciously guide their action, emotion, thought, energy, body and mind at all times. And so it is with the wielding of the kukri.

Gorkhas train to properly manage not only the physical skills needed to use the kukri as a weapon of self-defense but also to foster these four dimensions of the mind, which are needed to become a well-rounded member of society. The goal is to cultivate the spiritual dimensions of human beings and thereby transform this traditional weapon into more than just a killing tool. Ultimately, the student of the kukri strives to make the world a place with less loss of life and more peaceful coexistence. It is in this way that the kukri now plays a role that's far greater than the one for which it was created.

About the author: Shuny Bee is a freelance writer and martial artist who comes from Nepal. He now lives in Pasadena, California. His website is beemartialarts.com.