It's hard to deny that those who learn martial arts develop many skills and strong character traits needed to take the practice seriously. From improved confidence to self-discipline and respect, the things martial arts teaches are so much more than just physical.

One character trait that is often ignored but is an important part of practicing martial arts is courage. Here we explore how martial arts builds courage in its students and helps both youth and adults overcome their fears and develop new, braver senses of self.

Courage is a difficult behavior to master. Let's take a step back and examine what courage means. Courage, or bravery, refers to the act of doing something even though it is frightening or "out of your comfort zone."

Deeds accomplished through courage are not just "showing off," but are those that fuel personal growth or have a noble purpose. Trying to jump off a roof into a pool is not brave (although it may be frightening), merely reckless. However, leaping from a boat to rescue a drowning toddler would be considered brave. Performing competitive diving in front of an audience for the first time despite your stage fright would also be brave.

Perhaps your fear is standing up to a bully, starting at a new school where you don't know anyone, or moving across the country for a better job. Whatever the problems you face, the need for courage is apparent in everyday life. For some, bravery goes hand-in-hand with confidence. The ability to do courageous things may be greatly hindered when one lacks in self-confidence. Martial arts is a great way to not only improve your courage but your self-confidence.

Why is Courage Important?

Humans naturally have something called the "flight or fight" instinct. When faced with danger, our brains and bodies responding by either wanting to take on the situation or flee.

Imagine you're walking down the street. Suddenly, someone pops out from behind a building and shouts, "Boo!" Most people will jerk back and take a few quick steps away (preparing to run, if necessary) or raise their hands to a defensive posture (preparing to fight). Some people may take "fight" a step further and punch the person who surprised them.

Historically, the 'flight or fight' response helped us react to potential predators. Of course, we're no longer dodging sabretooth tigers these days, but the instinct is still there. And it doesn't just apply to physical threats. We still feel this instinct in any sudden and stressful situation, such as an embarrassing incident at work, or being asked a surprise question in class.

To overcome fear and the natural reaction of stepping down in the face of danger, we need to overcome tap into our 'fight' response and build skills and confidence in our abilities to defend ourselves.

How Does Martial Arts Build Courage?

In martial arts, gaining courage and confidence starts from the very beginning. The first class, for many, is often exhilarating and exciting while simultaneously being terrifying. You're walking into a room full of strangers to learn how to do something you may have zero skill in or knowledge about. 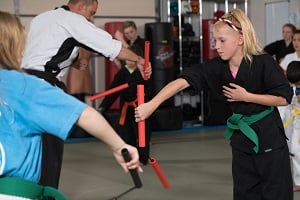 Perhaps it is your first time donning a karate gi or judo gi and even that small action takes a bit of courage. It is normal to fear embarrassment in front of strangers. Remember: Everyone in the dojo probably feels the same way or has felt that way at one point – even your teacher! Martial arts teaching classes are judgment free zones: Everyone is equal, everyone is there to learn and improve how they can and to the best of their abilities.

Once you have taken that first step of courage and begun your training, your courage will only evolve from there! Belt tests, tournaments, learning new skills, and demonstrations in front of the class or an audience will only help you build more courage and self-confidence.

While the first time you come to a martial arts class may have been the biggest leap in building your courage, over time, martial arts will continue to help you strengthen your courage, confidence and ability to handle fearful situations. 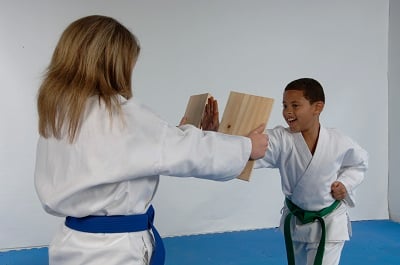 In every class, you are faced with the idea of taking on an opponent, of learning new skills and techniques, some of which you may fail at initially. However, the idea is that even if you fail at first, you try again, you change your methods, you improve, and you eventually succeed. Martial arts teaches you that perseverance and having the courage to try, even when it's hard, is not only possible but incredibly rewarding!

Over time, we see that martial arts builds courage in students of all ages and from all backgrounds. This courage can be applied to much more than practicing a sport, it can be used to take on the obstacles of everyday life and give you the confidence you need to confront challenging situations. With martial arts, you learn not to fear the idea of taking chances but to relish in it – and this confidence and courage is something that can change the course of a lifetime.

self defense
Introducing Martial Arts School Listings on Black Belt Mag!
Sign Up Now To Be One Of The First School Listed In Our Database.
Sign Up →
SUBSCRIBE TO BLACKBELT MAGAZINE TODAY!
Don't miss a single issue of the worlds largest magazine of martial arts.

ONE Championship To Make U.S. Debut On May 5 In Colorado

ONE on Prime Video 5 Recap

Nong-O vs. Ramazanov Moved To ONE Lumpinee 1 On January 20