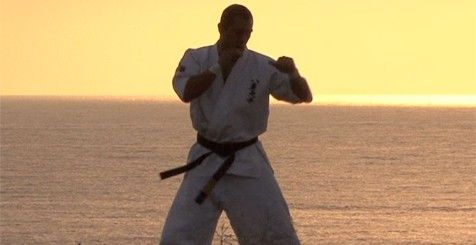 The story of Kenji Yamaki is one of illness, bullying, attempted suicide, self-discovery through karate and eventual acclaim as one of the few to not only survive the 100-man kumite but to emerge with an 83-percent victory rate!

Kenji Yamaki is a big man — even in the United States. His arms are like legs, and his legs are like tree trunks. He's soft-spoken and smile-prone off the mat, but the minute he dons his gi, that demeanor fades fast. Warming up, he moves like a Bengal tiger, his muscles rippling as he alternates between dynamic stretches and shadowboxing sequences. His fighting combos often start with simple, direct power punches, which he likes to follow up with a knee to the face or body, or an elbow to the head. As he loosens up, he starts putting more power into his moves. He delivers his body punches and thigh kicks with a forward momentum that often overwhelms his opponent and drives him backward. He apparently loves leg sweeps, which he uses to good effect at the most unexpected times.

All in all, the techniques aren't too surprising for a kyokushin alumnus; what is surprising is how devastating they become when they're launched from a man as massive as Kenji Yamaki.

All that skill would be impressive in any human being, but the stoic nature of the middle-aged master makes him one of a rare breed. Ask him a question, and he looks off into space for a moment before constructing his answer. He's a man of few words — a throwback to the 1950s or '60s when karate instructors were more about action than they were about convincing the world they're the toughest fighters on earth.

New FREE e-book for parents and martial arts teachers! Karate Sensei: Should They Be Respected or Feared by Students?

A junior-high school student named Kenji Yamaki is the victim of incessant bullying. Although the Japanese boy is taller than virtually all his classmates, his thin build — caused in part by his anemia — marks him as a target and leaves him unable to fight back. “I was very weak," he says. “Everybody tried to attack me."

On three occasions, he contemplates suicide, actually climbing to the top of the tallest building he can find and steeling himself for the death leap.

Somehow, Yamaki makes it to 15. Despite standing nearly 6 feet tall — meaning he's a veritable giant in Japan — the boy weighs only 120 pounds.

One day, the spindly teen spies a kyokushin karate school near his home in Kawasaki. “At that time, karate was booming in Japan," he says. “I learned that kyokushin had a reputation as the strongest karate, so I went to the dojo." He signs up for lessons immediately.

The youth glides up through the ranks of kyokushin. The techniques come easily to him, and he makes them work flawlessly in kumite, the hard-core, bare-knuckle sparring for which the art's renowned. “I decided to quit thinking about suicide and become the world kyokushin champion," he says.

As all martial artists know, being a kyokushin champ means fighting. He hones his edge in the ring, and the bullying diminishes. “It stopped completely after one year," he says. “I have always respected kyokushin, and at the time, I was grateful to have learned it," he says.

Kenji Yamaki earns his first-degree black belt at 20. A year later, he places third at the All-Japan Karate Tournament. Over the ensuing decade, he places in the top 10 at the prestigious event and its big brother, the World Karate Tournament, every year. He's discovered his raison d'être.

The man is now 30. Although he triumphed again at the 26th All-Japan Karate Tournament last year and at the World Karate Tournament this year, he continues to eschew the fame and fortune that normally are thrust on Japan's top athletes.

Instead, he vows to test his mettle by undergoing the 100-man kumite, a traditional test of combat skill that entails waging empty-hand war against one opponent after another until each bout yields a victor. “It was the hardest thing I ever chose to do," he would say later.

Kenji Yamaki battles his way to his 70th opponent at the Kyokushin Headquarters in Tokyo. The last few matches have taken their toll, however. Starting with opponent No. 71, he becomes a punching and kicking automaton. He has no memory of half his final 30 battles, yet he soldiers on to the end.

The ordeal takes three hours 27 minutes. Afterward, officials tell the karateka that the tally is 83 wins (including 22 knockdowns), 12 draws and five losses.

The bloodied and bruised karateka is rushed to the hospital. “I felt like I would die," he says. “My whole body was affected. I was taken to the emergency room. The doctor said I looked like I'd been in a car accident — like I'd been hit by a truck. My kidneys were damaged. I lost consciousness and almost died."

Kenji Yamaki eventually recovers and resumes training in the art he loves.

He leaves Kyokushinkaikan, the governing body for his style, and forms yamaki-ryu karate. He then relocates to America to teach his art and let others enjoy the benefits it offers. “If I had stayed in Japan, my position in life would have been very stable and good," he says. “But I moved to America because I love this country and wanted to spread karate."

Black Belt contributing editor Mark Cheng shines a spotlight on a fighting phenom he recently met in Los Angeles. He claims the man is one of the most powerful and precise strikers he's ever seen. His name: Kenji Yamaki. Mark Cheng sings his praises in the January 2004 issue in a feature titled “3 Fast and Furious Kicking Techniques From Yamaki Karate."

Day in and day out, Kenji Yamaki humbly goes about his business: He teaches karate to Americans and Japanese-Americans in his Torrance, California, dojo. On a whim, his associate, Mark Kuwata, sends an email to the Black Belt office. He provides details of the karateka's career and recent appearance on the cover of a Japanese magazine.

Kenji Yamaki returns to Black Belt to teach the martial arts world some of his favorite fighting techniques. From the way he speaks and acts, it's apparent that he's dedicated his life to the budo. He speaks enthusiastically about his dojo, his students and his plan to one day organize a taikai, a full-contact karate competition, in the United States. He's asked if, at 46, he'd consider fighting in the event. “No," he says. “I have retired from competition. However, I'll never retire from karate."

It's been claimed that only 14 people in the world have endured the 100-man kumite, the ultimate test of martial arts mastery devised by Mas Oyama, the legendary founder of kyokushin karate. Now you've met one of them.