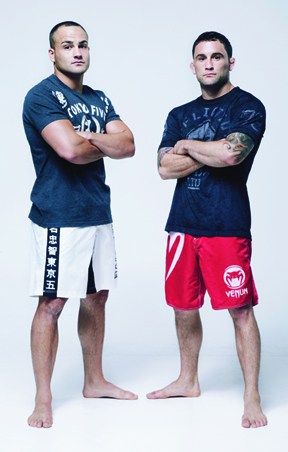 Leave it to a hurricane named Irene to nearly scuttle the first-ever joint photo shoot and interview with UFC lightweight champion Frankie Edgar and Bellator lightweight champ Eddie Alvarez—an event that was months in the making. Just 24 hours before we were scheduled to snap our first picture, lower Manhattan, where Black Belt's East Coast photographer is based, was in the middle of a mandatory evacuation. In an unprecedented move, the mayor ordered New York's mass-transit system to shut down. Meteorologists predicted that the storm surge could leave the coastal areas of the city under eight or more feet of water. Local TV networks scrambled to create Hurricane Irene logos and theme songs to brand their nonstop news coverage, and a few stations went so far as to broadcast computer-generated animation to show us what the flooded city would look like. With little left to the imagination in the future that the weather reports said awaited us, the odds appeared slim that we'd pull off the photo shoot. Because both fighters were scheduled by coincidence to defend their belts in their respective promotions roughly six weeks later, the demands of their training camps meant that a rain date wasn't in the cards for either man. After orchestrating a series of pre-Irene e-mails and phone calls involving the relevant parties—during which I received a helpful recommendation from Mrs. Edgar telling me where I could still find vacuum-sealed milk for my 15-month-old son—our plan was to hunker down in our homes and ride the storm out. When it looked like Irene was winding down, I'd contact everyone to determine if the guys thought they could make it to New York the following day for the shoot and, not incidentally, if there was still a New York to make it to. As it happened, Irene wrapped up her visit to the Big Apple more quickly than expected, which was fortunate because it helped lessen the still-significant effects of the storm on the region. The scale of the disaster was downgraded from "biblical" to "epic"—with pockets of "biblical" remaining, depending on how close to the nearest river you were. I was in my home in New Jersey, sitting in a dark basement with no power, sopping up water with a towel and bucket when my cell phone rang. It was our photographer, Peter Lueders, who was at that moment bravely riding his bike across the Brooklyn Bridge, heading straight into the evacuation zone. His mission was to check on the condition of the studio. Mass transit was not yet operating, so pedal power was the fastest means of transport available. He said he'd call back in an hour if everything was OK. I figured if I didn't hear from him in two hours, I'd have to find a boat and organize a rescue. Luckily, he's a capable cyclist, and traffic was understandably light on the empty streets, so it was only 30 minutes later when he called back. There was no flooding in the city, the studio was in order and the lights were on.

That was very good news, but I was still in the dark with a dangerously depleted cell-phone battery. I needed to quickly establish the fates of the fighters. I first called Edgar, who had no power, as did most of the Jersey shore. (Did I just use those two words? Really, that's what we call it.) Then I phoned Alvarez in Philadelphia, where the swollen Delaware River threatened to wash out the bridges. The roads both would have to use during their commute were littered with downed trees, areas of flooding and sporadic closures. Conditions were sure to remain precarious throughout the next few days. Would they ignore the risks, forge ahead and take that uncertain journey into the city in the morning? Would we actually pull this off?

Of course we would. Martial artists see every obstacle as an opportunity to overcome and improve. Not only did both fighters concoct plans to come into the city, but they also had called each other before I reached them and agreed to meet up at Renzo Gracie's Jiu-Jitsu Academy in midtown Manhattan to squeeze in a workout before our photo shoot.

The next day, I asked Alvarez how champions like he and Edgar deal with the high expectations and constant demands the promotions, fans and media place on them. He answered: “[MMA] isn't really about always winning. It's about watching a person deal with a crazy amount of adversity, bounce back and still continue to fight. You need to know how to deal with adversity first before you can ever think about winning or being a champion. If you can deal with it, you can cope with anything inside or outside the cage. If you can't, don't even bother to show up."

As I listened, I wondered how I could ever have worried that a mere hurricane would keep these guys from showing up.

Patrick Bamburak's interview with Frankie Edgar and Eddie Alvarez is in the January 2012 issue of Black Belt, on sale now.