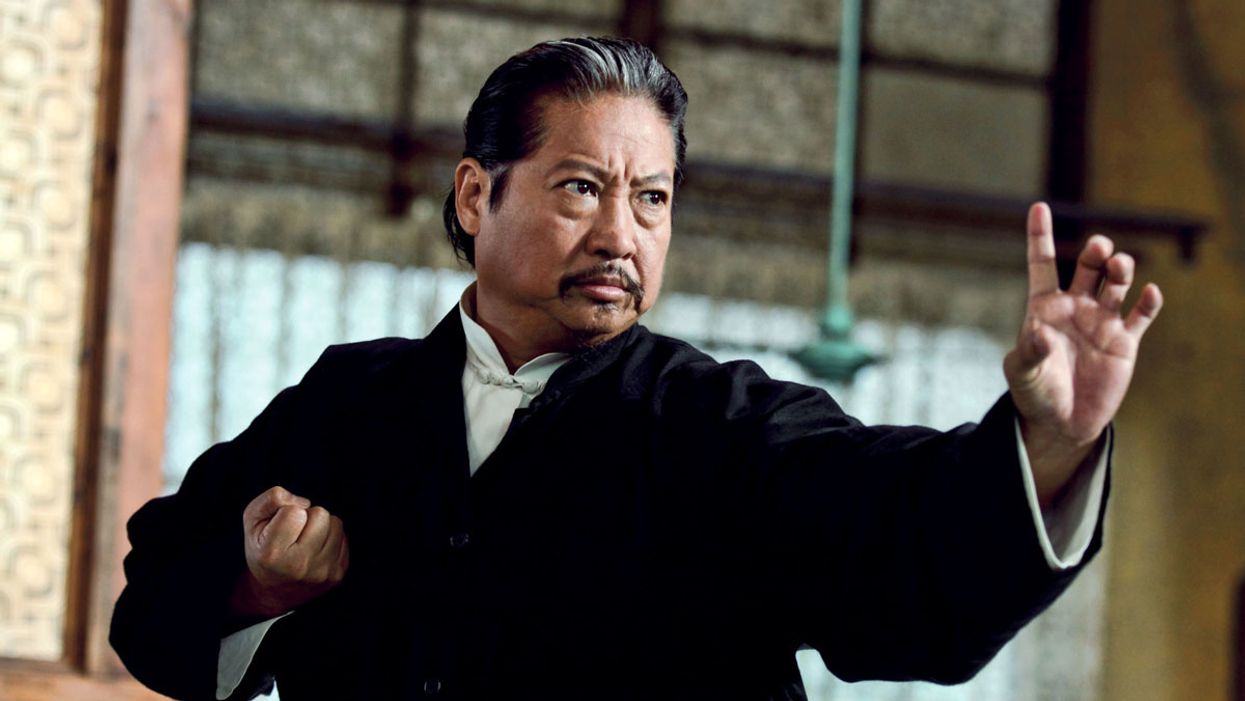 Why are Chinese martial arts movies so good? Why are Sammo Hung's movies so great? Find out here!

Sammo Hung (aka Hung Kam-bo) is arguably the most versatile and prolific actor, director, producer, fight choreographer and stuntman in Hong Kong cinema. The oldest of five brothers, Sammo Hung began his training in acrobatics, acting, and song and dance during a stint at the renowned Peking Opera School when he was 9. At 16, he ventured into the world of cinema. Realizing the need for fighting skills, he strove to acquire martial arts experience. After training in karate, kung fu, taekwondo, aikido, wushu and Chinese boxing, he became one of Hong Kong's hottest filmmakers.

Black Belt: Your early training took place at the Peking Opera School. What exactly is that?

In my school, we learned everything: acrobatics, acting, dancing and singing. Because I am so big, when I first went to the school, I learned to be a girl. Everything had to be very slow; every movement had to be very little; my voice [had to be] very soft. I also played many different characters. Sometimes I would play an old woman.

Black Belt: What was it like being a student at the Peking Opera School?

Sammo Hung: The training was very hard. In the beginning, I got one day off, and I could go home to my family. But after one year, we started performing, and then we had no days off.

[It's a] very tough life. You get beaten up when you train. The master asks you to do an hour for each exercise, and [even] if you are crying, you cannot do less. If one [student] is bad, everybody gets beaten. And everybody respects the master. This kind of training is part of the culture.

The levels are very clear in the Peking Opera School. I was the oldest, then [came] the master. When the master was busy, I was in charge. It was very structured, and everyone had great respect for elders.

Black Belt: What did you mean when you said that everybody got beaten?

Sammo Hung: Everybody got beaten with a stick.

Black Belt: What is the worst injury you received there?

Sammo Hung: Every day [when I] woke up, [my] muscles hurt. Every day [I got] bruises, sometimes broken bones. One time, my master made me do a handstand on top of a small stool for one and a half hours. I said, “Master, I can't hold it any longer!" I [fell], cracked open my head and passed out. But they never took me to the hospital. They just took [some] tobacco and put it on my head [to] seal the wound.

Black Belt: What did a typical training day at the school consist of?

Sammo Hung: In the Peking Opera School, everybody sleeps in one room — boys on one side, girls on one side. At 7:00 in the morning, [we would] wake up and roll the mats against the wall, then roll out the carpet for training. We started with stretching, then did some acrobatics and somersaults for a couple hours.

Then we had some breakfast, then trained again until lunchtime. [After] maybe one hour for lunch, we would train until dinner. We were always working on different skills, but most importantly the basics. After dinner we worked on singing, characters and more acrobatics. Then at 10:30, [we would] go to sleep.

Black Belt: What was it like to perform at such a young age?

Sammo Hung: It was very hard. Everyone spoke Cantonese in the opera, but we had to learn Mandarin for the shows because Mandarin is the official Chinese dialect. After one year of training, we performed every night for three years in a row. We trained during the day and did the shows at night. Three hours for each show.

We were always doing different kinds of shows. Each show is made up of many little movies. It is important to be creative and keep an open mind. If not, then the audience falls asleep.

Black Belt: Did you find the transition from opera to movies easy to make?

Sammo Hung: Yes, because my whole family comes from the movie business. My grandfather owned a big movie studio and was a big film producer. My grandmother was a big movie star in the 1930s.

Black Belt: What has been the secret of your success in the Hong Kong film industry?

Sammo Hung: I didn't want to be just a stuntman, just a fight choreographer or just an actor. I wanted to be able to do everything. I wanted to learn everything: acting, directing, producing, lighting and stunts. [That's why] I teach my stuntmen everything. My philosophy is, How can I expect others to do things if I can't do them myself?

Black Belt: What is the major difference between action filmmaking in the United States and in Hong Kong?

Sammo Hung: Well, in U.S. filmmaking, they usually stay close to the script. In Hong Kong-style, sometimes they start with a script, but they don't use it all the time. Sometimes by improvising they can get the point across better and make it more funny than the original dialogue. Sometimes [being] spontaneous is better.

Black Belt: Have you ever made a film that was all improvisation — and no script?

Sammo Hung: Yes, lots of times I didn't have a story or script. One time, I had five characters in my mind. I had a writer script out dialogue for my story idea. When he brought the script to me, I didn't like the dialogue, so I gave it back to him to make changes. It took so long for the writer to finish the changes that we went ahead and filmed the movie without the script.

Because the story and characters were so strong, we were able to show the message in each scene through the actions and words. When the writer came back and handed the script to me, I said, “The film is already finished."

On sale now in the Black Belt Store!

Black Belt: Your films include some outrageous characters. Where do you get your inspiration?

Sammo Hung: I am a people-watcher. I used to go to bars and watch people. [Whenever] I see unique people, I keep their characters and personalities in my mind [so I will] have many to choose from when I need to think of one for a movie.

Black Belt: In Knock Off, there is an incredible scene in which you and Yuen Biao imitate monkeys. Where did that idea come from?

Sammo Hung: From watching monkeys. Yuen Biao and I went to the zoo. No, just kidding.

Black Belt: There is a lot of stunt work in Hong Kong films in which actors are suspended on wires. How do you manage to make the choreography so amazing?

Sammo Hung: Since we don't have a lot of money in Hong Kong, instead of asking a computer artist what tricks the computer can do, we must do it for real. We just use the wires to help us make the movements more exciting and dynamic.

Black Belt: What advice would you give to martial artists who are interested in getting into stunt work and fight choreography?

Sammo Hung: Train! To prepare for stunts, some people know martial arts, and some are just normal people who have never done martial arts. It doesn't matter. You must train morning, afternoon and night. You must learn how to do martial arts, how to do acrobatics, how to do reactions, how to do everything. To be very good, you must want to learn. Keep your mind open to new ideas and stay confident with your moves.

Black Belt: What do you look for when you are casting the lead roles in a movie? What qualities must a person have to become an action star? Looks, acting, martial arts, stunt abilities?

Sammo Hung: It is very hard to find a guy who can do everything. First, he must have good acting [skills]. He must look good and play the character [well]. This is most important. If he can fight and do some stunts, this is very good, too. But most important is the acting and character work.