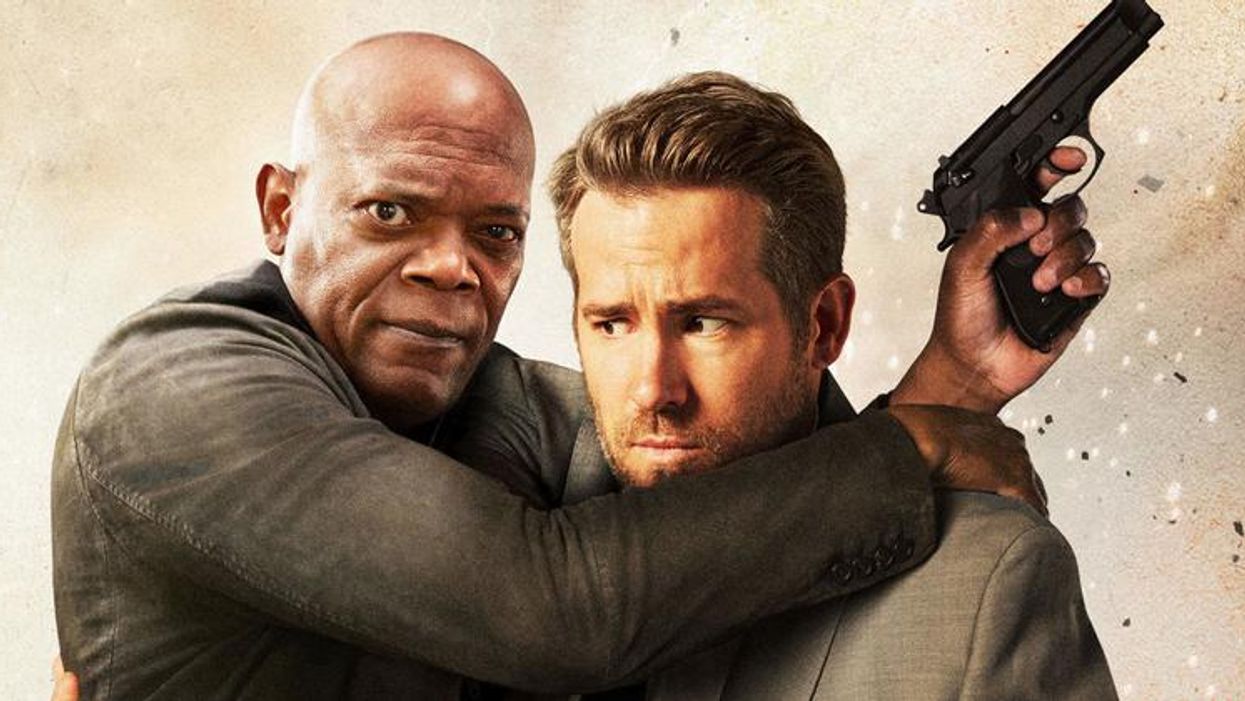 When I watch action films that have martial arts in them, which most action films do these days, including Godzilla vs. King Kong (2021) that used martial arts inspired fights on the monster level, there are three things I always do: within five minutes, take note of my initial impression; after the movie ends, create a short emotional expression; and finally develop an overall view of the action. This sentence reflects the importance of chemistry in a film, three ions. And when it's comedy, my brain goes into overdrive.

Ryan Reynolds broke into Hollywood starring as the namby-pamby Michael Berg who created chaos for his friends in the 1990s cotton candy sitcom, Two Guys and a Girl (TGG). Twenty years later, the of Scottish ancestry Reynolds relives TGG as the derelict, father issue-loaded, bodyguard Michael Bryce in the rugged haggis bladder, whacked out, bullet-riddled, action comedy The Hitman's Wife's Bodyguard (HWB). This time around, the other guy and the girl he's creating chaos for are the homicidal hitman, Kincaid (Samuel L. Jackson), and his frightful, brick house, con-artist wife, Sonia (Salma Hayek), a mother wannabe who uses more fowl language than a coop full of deranged chickens.

As the frenzy builds and the exorbitant symbols of blood, rupture, squirt, artery, good guys, bad guys, explosions, chases and ultra-violent doom splatters the screen, this trio of friends and the triage of dead bodies left in their wake are trying to prevent the psycho Aristotle from destroying Europe with a computer virus. What are my three ions?

Since HWB opens in Greece, I'm reminded of Greek mythology's unsolved Cyclops question of is he winking or blinking. The film is a winking rampage of abject ardor loaded with flirtatious cacophony with the emotional premise chaotic insanity with psychotic profanity, which led me to conclude that HWB is good illustration of how to make a flashy martial arts film without martial arts.

To me, that sounds wackier than a British Knight testing cardboard armor in battle where Bryce is the kind of dude that would already bring a proverbial knife to a gunfight.

This film dynamically shows how to shoot a fight scene where even a simple punch, which I'll call the one-two since sometimes there's a block, that in the opening fight is a single punch Bryce throws when he and Sonia rescue Kincaid from the clutches of evildoers. The one-two is shot with crazy chaos cam moves from an extreme close up, with shaky camera tilts that weave around the whole punch in close to medium shots with loud sound effects. That's the fight, and it works great for the film.

Combining other one-two combative skill with chaos cam during a scene makes for an interesting group of what appears to be separate highly stylized fights. This holds true for most non-firearm exchanges in HWB. There are two main fight scenes of particular note.

While Bryce and Kincaid escape Aristotle's dungeon prison that is rife with underground corridors, the two find a mace, an ax and a sword. As the escape alarm blares and they're running through corridors using each weapon as one-two strike fight scenes, it seems the duels are a nod to Bruce Lee's pole, escrima and nunchaku fight against Han's guards near the underground radio headquarters in Enter the Dragon (1973).

There's six separate fights occurring at the same time within the tight set confines of a yacht that are presented by interacting and intercutting all six fights together. Perhaps because audiences will probably recognize the established one-two non-ballistic chaos cam process, viewers won't get lost as to what's going on during each fight.

Which comes to the most crucial component that sells the simplicity of the one-two fights. Director Patrick Hughes' brainy way of once again psychologically manipulating the audience. He did something similar with The Hitman's Bodyguard (2017).

Einstein once noted that everyone's a genius, but if you judge a fish by its ability to climb a tree, it'll believe it's stupid. When Sylvester Stallone made the cops and mobbers Cop Land (1997), he was determined to prove he could do award winning acting without being an action hero and climb that proverbial tree. After all, dolphins and whales are mammalian fish, so to speak. Each time he's getting beaten or roughed up by the baddies, you're waiting for Stallone to come to his senses and go Rambo/Rocky on them. It doesn't happen, he looked like a fish out of water and the film flopped.

Hong Kong filmmakers are genius when it comes to shooting fights using actors who don't know kung fu or how to fight, so they don't need to waste time and money training an actor for three months. It's about using actors whose characters are known to do good fights and knowing how to tap into the audiences' psychology of that expectation.

Reynolds' Bryce is a fish that swims and acts within the waters of his Deadpool character and that connection is made even stronger as Bryce also taunts with gaslighting insults, wisecrack threats and trash talking. Audiences are subconsciously aware of this and all we need to see is a hint of that fighting accessibility to be bamboozled into thinking that Bryce has also made the Deadpool connection on screen. At that point our minds translate that Bryce has become the mammal fish in the martial arts fight tree, even though it's not martial arts. It's the power of transference and Psych. 101.