Let Us Not Slash History to Shreds 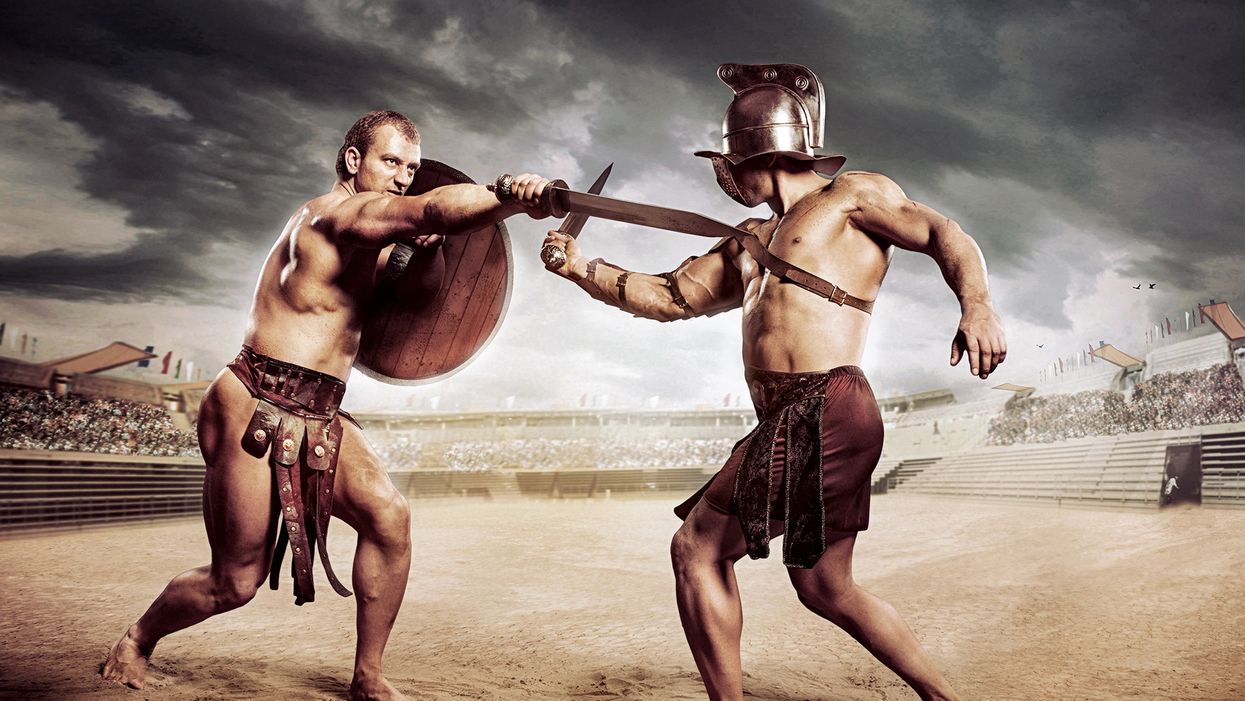 We noticed that much of what's called "indigenous" seems to have a mighty close parallel to Filipino blade work or European sword-and-dagger traditions.Now, this simply could stem from one or more of the following:• Human movement is finite, and battle efficiency dictates commonalties in tactics.• When cultures commingle, it can lead to apparent commonalties that result from "idea exposure."• It's tempting to transplant one's assumptions when the historical record is found to be meager, which amounts to re-branding old sauce in new bottles.Note that I said some blade work, not all blade work, seems to share these commonalties. In no way am I condemning all historical weapons skills as not on the level, but I will be honest: The deeper my research goes, the more I find that historically specious material abounds.A prime example of this is the blade work of the Roman gladiator, who used the archetypical weapon from which the warrior class earned its name: the gladius.

It could be because of the influence of programs like Showtime's Spartacus and the dictates of constructing entertaining fight choreography. Maybe it's because of the spread of Filipino fighting principles around the world. But when I encounter what's claimed to be authentic gladius work, for the most part, I see the usual numerical angles of attack that follow the common arnis-derived 8-12 pattern and that rely heavily on the slash with far less weight given to the thrust. (This does not apply to all situations and practitioners. Good on those who go for accuracy!)Consider the following, if you will. In the gladiator's arsenal, the twin to the gladius was the shield, more often than not. The tools were used in tandem, not as separate implements. The gladius and shield were like the boxer's jab and cross. They were meant to be used together, to set up each other and most definitely to not get in the way of each other.The Roman legionnaires' influence on gladiator training is heavy, and their use of the shield and sword is illuminating. The centurions would form tight battle lines with shields interlocking or at least in a very close formation. This led to the tactic of emphasizing the thrust over the slash. There were several reasons for this:• The thrust could come from behind the shield and move forward at different angles.• The thrust did not expose the weapon hand, which would be the case with a slash moving in a wide arc.• The thrust did not require the same recovery motions, reducing the time it took to return to an attack position.Regarding that last item: We're talking about a weapon that was heavier than a tactical folder, one that weighed between 1 and 3 pounds, depending on the sword used. As such, we must remember that weight and inertial forces would slow all recovery motions.

If we assume that gladiators adopted the same tactics as were used by the majority of the empire — and the historical record suggests this — again‚ why is there so much slashing in "historically accurate" work?Some might say that the lack of a tight shield formation allowed this freer movement and led to the slash flourishing inside the arena. Could be.But it's better to look to forensic science, which has examined the wounds suffered by gladiators as evidenced by their skeletons. Fabian Kanz, Ph.D., and Karl Grosschmidt, Ph.D., both of the Medical University of Vienna, applied their skills to skeletons unearthed in Ephesus. They found that in a majority of instances, the cause of death was blunt-force trauma to the head.This information would seem to belie the assumption that a slash to the head would cause such a fate. But the doctors found little blunt-force trauma over the rest of the bodies. That is, they discovered virtually no slashes or hacks to the bodies or limbs that preceded the killing blows.Now, there are a few possibilities as to why the head-trauma evidence exists. One, a gladiator with a gladius in his hand was the boxing equivalent of a "headhunter." That is, he valued strikes to the head over all others.Hmm, really? In a fight for your life, would you eschew qualitatively successful tactics and skip attacks to the legs, arms and torso? We're talking about fights to the death, not fights for points!Two, perhaps thrusts were used almost predominantly as indicated by the Roman military tradition. Thrusts usually penetrate vital organs and soft tissues that don't survive as long as skeletal components. Decomposition would render evidence of soft-tissue trauma not there to be added to the ledger.If this is so, how do we explain the preponderance of head trauma? Well, the doctors and those of us who know our gladiator history may recall Dis Pater.Who or what is Dis Pater? The phrase translates to "father of the gods." Once a gladiator had fallen and could not or would not return to the fray, Dis Pater, a comrade assuming the role of the economical culler of the worthless wounded, would step in, hammer in hand, and deliver a death blow to the head — hence, the observed frequency of head trauma.

In the gladiator's arsenal, the twin to the gladius was the shield, more often than not. The tools were used in tandem, not as separate implements.

With all this said, I'm not against historical recreation in the martial arts. On the contrary, I'm a huge proponent of it. What I am a little leery of is assumptions or declarations that don't jibe with the historical record or with science. I'm equally skeptical of information that claims a bit too much when the records and the science are lacking.Let us investigate our martial pursuits with gusto and with an eye on truth. Let us allow the legends and the assumptions to slough away when they don't mesh with reality. Only in this way will the truth about the origins of the martial arts be preserved for future generations.
Mark Hatmaker's website isextremeselfprotection.com.