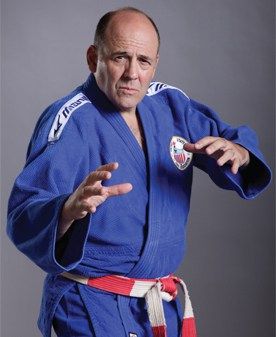 "[This sequence] is prearranged to show ... the versatility of the judoka to handle a person, be it armed or unarmed," says the seventh-dan judo master and president/CEO of the United States Judo Association.

"Kata means prearranged form," explains 7th-dan judo master Gary Goltz, president and CEO of the United States Judo Association. "In karate, they have lots of prearranged forms where the individual practitioner does different patterns with the hands, with the feet, in combination. In judo, our prearranged forms obviously involve an opponent." And in this video demonstration recorded in one of Black Belt's photo studios, Gary Goltz and his training opponent seamlessly carry out a sequence of self-defense moves that incorporate techniques from two arts, actually: judo and aikido

"We have kata for throws, we have kata for holding techniques, and this particular one focuses on self-defense," Gary Goltz continues. "[This sequence] is prearranged to show ... a large variety of attacks and to show the versatility of the judoka to handle a person, be it armed or unarmed. Either way, judo, while most people think of it as an Olympic sport, it's still based in the martial arts, rooted in jujitsu, and [is] a very formidable form of self-defense."

In discussing the genesis of this form, called goshin-jitsu, Gary Goltz delves into some martial arts history: "[Goshin-jitsu is] a kata that was invented in the late 1950s at the request of the Air Force. They went to the Kodokan and asked that the Kodokan make a form that would be more relative to modern combat as opposed to things like the samurai with the swords and kneeling like you're doing a tea ceremony.

"So [Kenji] Tomiki, who was one of the Kodokan's top people — who was also very skilled in aikido — developed this form, and it really develops judo and aikido as one art. You can really see the similarities and how they blend. A lot of the moves, you can't really tell if it's judo or if it's aikido."

Stopping short of listing all the judo techniques and aikido techniques that form this hybridized self-defense sequence, Gary Goltz gives a general breakdown: "[This kata] has several sections. The first section is the unarmed techniques. The second section is holds. The third section is strikes, and then the last three sections are weapons — first with a knife, then with a staff (we use a pipe; it looks more dramatic), and finally the gun. So it kind of progresses to the ultimate weapon."