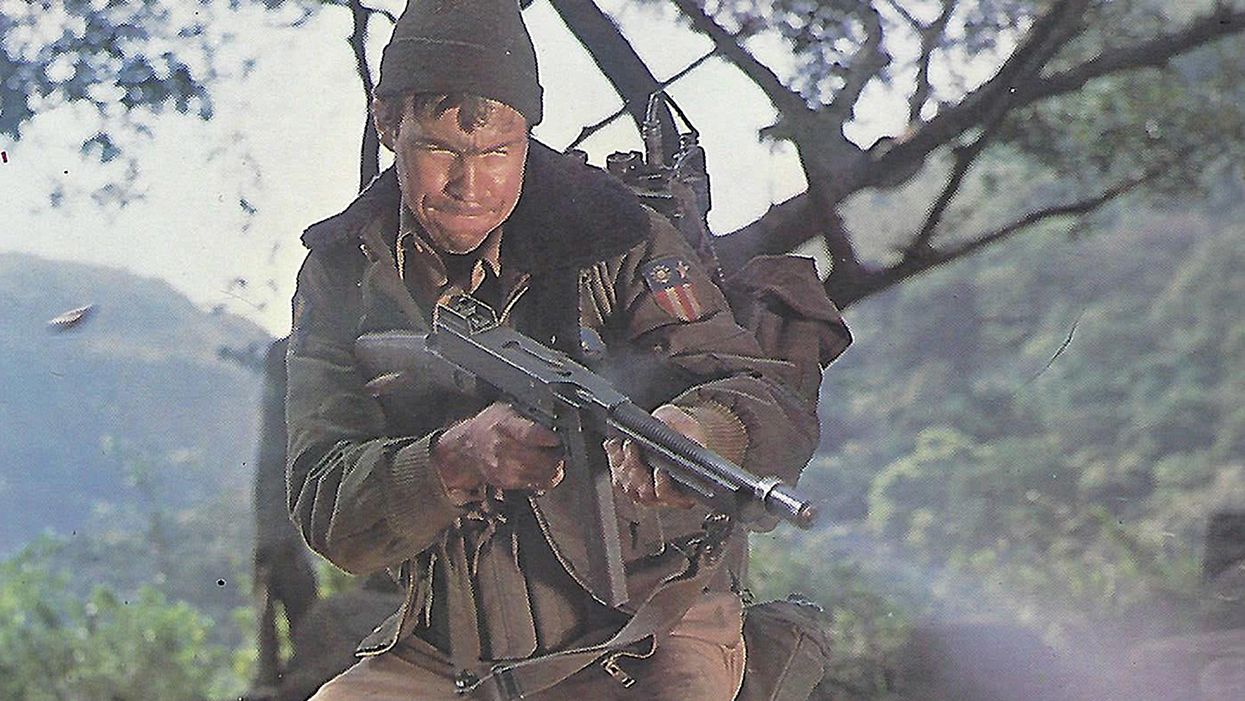 In December 1979, I found myself meeting with a film director named Ding Shan-xi. He had thick-rimmed glasses, combed-back hair and a stature that commanded respect. We were at an abandoned American military base in Taipei for my first audition for a kung fu film.

Ding introduced me to Yang, who asked me to show him some kung fu that he'd never seen. Minutes later, Yang said in Chinese, "American Bruce Lee." I didn't know if it was a compliment or a dismissal.

Looking back, it must have been positive because my first fight-choreography lesson came next. Back then, films and fights were shot with one camera, so Yang needed to know how fast I could learn new skills and how many techniques I could execute before messing up. After an hour of bone-on-bone practice, I demonstrated that I consistently could run through 10 techniques without error. Passed.

The last test: Could I sell a hit? I was told that somebody named Lady Wu would kick my neck, at which point I was supposed to do a half flip and land on my back — on asphalt. I'd never done that!

Someone shouted, "Action!" Crack. She kicked me hard. I flipped and could immediately feel the tiny stones in the asphalt piercing my back. They created an intense "rock in shoe" discomfort — and suddenly the sky looked different. Standing up … holy mother of crap, the world was crooked! No, actually my neck was crooked, dislocated. I could barely move.

There was no apology. Yang grabbed my neck, and I heard a snap! Stunned, I found that my neck was back in place and I could move. Yang nodded and said, "Again!"

I protected my neck with a subtle shoulder raise — right before the next crack! Wu seemed to hurt her foot.

Bop! This time, neither of us was hurt. Yang grinned like the Cheshire Cat. Apparently, he approved.

When I'd arrived in Taiwan five months earlier, it was during martial law, which ensued when America broke ties with Taiwan. I was arrested at the airport and charged with drug smuggling (I'd packed a supply of pills for treating my cystic fibrosis) and weapons dealing (I carried a pair of wooden tonfa), and I was threatened with the death penalty. The military was upset at America for breaking off relations, and because I was an American, I became a scapegoat. When I was released, I was warned to keep a low profile.

Naturally, I proceeded to accept a role in Flying Tigers and the Kung Fu Kids (1980), starring Taiwan's kung fu screen queen Ling Chia. Ding cast me as Harry, a Flying Tigers pilot who is shot down over China, captured by the Japanese and rescued by 12 children. Uh oh! The producer was a three-star general, and because it was a war movie, hundreds of extras were real soldiers. The situation was less than reassuring, to say the least.

On the third day of the shoot, my neck still caused shoulder stiffness and a pain that radiated down my arms. Yet it was a result of my first fight scene ever, and I was psyched. After the kids rescued me, I was surrounded by three Japanese soldiers who wanted to pincushion me with their bayonets.

I met choreographer Tsai, with his brick-face certainty, but he avoided shaking my hand. That went as well as eating wasps. When the camera rolled, I found myself facing the lens with soldier No. 1 on my right, soldier No. 2 on my left and soldier No. 3 behind me. In one unedited shot, No. 1 was supposed to stab toward my gut and I would step aside. He would then kick at my face, and I'd block it before decking him with a right cross. Next, No. 3 would bayonet-swipe at my head, and I'd lean back and duck before punching him in the gut — at which point he would swipe at my face again, causing me to duck, hit him with two body shots and uncork a left cross. Finally, No. 2 was supposed to poke at my face, and I'd move to the left and jab him in the face. He'd drop his rifle and grab me, after which I'd throw him at No. 2 before side-kicking No. 1 in the face. Easy enough, right?

We did two slow runs through the sequence, then three more at a faster pace. Each time, I had to avoid the bayonet strikes for real. Ding's final instructions were bizarre: "Punch, kick, block like in real fight — they try hit you! You showed me your control, now do it with power on camera. Don't worry about stuntmen; you won't hit them. They fall away last second. Remember, act like you been tortured, arm sliced, shot in knee."

Action! After I barely avoided the bayonet, soldier No. 1 unleashed a kick that could have caved in my face. I felt glad my block was solid. I punched his helmet — and my knuckles split open. Blood gushed. In his exchange, No. 2 was faster than expected. Then No. 3 grabbed me hard, and I hurled him around my body. That led to No. 1 missing his mark and winding up unconscious. I flashed Ding a "What now?" look.

As the stuntmen revived their fallen buddy, Tsai screamed bloody murder in my face. I couldn't apologize enough. But we continued. My hand covered in blood, I hit No. 1's helmet so hard that it buckled, breaking his jaw. Stuntmen and real soldiers glared at me. For my own safety, Ding called it a night. I was collecting enemies faster than a cheetah on speed. I'd become the scarlet letter "A," which stood for American, and making matters worse, I'd hurt someone.

Over the next few weeks, it was 16-hour-a-day shoots with 30-minute breaks for watery rice adorned with chicken feet and pig ears. We had no drinking water, and the toilets were a patch of bushes and reeds where snakes and other critters lived. Yet my toughest challenge was avoiding the soldiers' requests to "play kung fu" with them. In other words, they wanted to fight me for real.
For my next on-screen battle, assistant choreographer Li was in charge. It was daytime, which meant 90-degree temperatures. I was dizzy from dehydration. Three Japanese soldiers attacked me with bayonets. I worried because I was supposed to jump over low bayonet sweeps and do spin kicks while carrying a machine gun and a 30-pound field radio.

Things proceeded at half speed. I asked if there was any cold water to drink. Nothing. I smelled raunchy because the costumes were never laundered — it was believed that doing so would make them look less authentic. Ding asked if I was ready. I wiped the salty sweat out of my burning eyes and nodded. The fire in the eyes of the soldiers showed that they were happy they'd been selected to fight me.

Action! Barely avoiding No. 1's bayonet — I heard gasps from bystanders — I rifle-butted his head. Then No. 2 slashed at my knees but his bayonet was too high, causing me to jump higher than planned. Bam, inertia caused the radio to rise and crack the back of my skull. The blow left me off-balance, confused and spin-kicking out of control. No. 3 pulled his strikes, but I still staggered before finally sitting, the world a whirl. I grabbed the lump on the back of my head and found that it was bleeding badly. Mild concussion, I feared.

When Ding asked if I was OK, I reportedly said, "Are the cows out of the barn yet, mum?" Ten minutes later, the prop guy strapped the radio to my back, and we tried again.

Action! Spin, pow, jump, spin kick, wham, metal-on-metal block, kapow! Ding yelled, "Cut!" then gave me a thumbs-up, which was infinitely better than being thumped down, I thought.

Days later, I found myself engaging in an unscripted duel against the evil Yeoki in a barn, where only Ding, the cameraman, Tsai and I were present. Tsai had created a 30-second fight sequence, and it was about to begin. After two slow dry runs, Tsai told Ding we were ready. Really?

Action! I blocked a kick but wham, I was sent reeling to the ground. I realized this was no barnyard square dance. It's payback time, I thought. Tsai pulled me to my feet, threw me against a wall and whaled on my gut. I had been doing 1,000 sit-ups a day for five years, so it barely tickled.

Ding yelled, "Hao!" (Great!) He had no clue what was happening.

Tsai tried to tackle me, which caused me to switch on. I sent a descending elbow into his back. He let go, but for 20 seconds, it was pugilistic mayhem — a real fight. Ding finally realized what was happening, so he yelled, "Cut!"

We stopped. Both of us were on the ground. Tsai nodded, gave me a thumbs-up and forced a grin. Revenge exacted!

It was essential for Tsai to know that if I could dish it out — albeit accidentally — I was also able to take it — albeit purposely. It was as if a cloud had lifted from the set. The stuntmen and soldiers lost their sneers, and I became part of the group.

Later, I was allowed to use my knowledge of kendo to help Tsai choreograph the final sword duel, in which a samurai sword was pitted against a Chinese broadsword. It was gratifying.

Fast-forward 20 years: I'm a fight-directing apprentice with the Hong Kong action crew on Sammo Hung's Martial Law series. Alan Lan, who was but a child actor in Flying Tigers, is Sammo's stunt double. It's a small world! He confesses that for 19 years, he actually thought I was Bruce Willis.