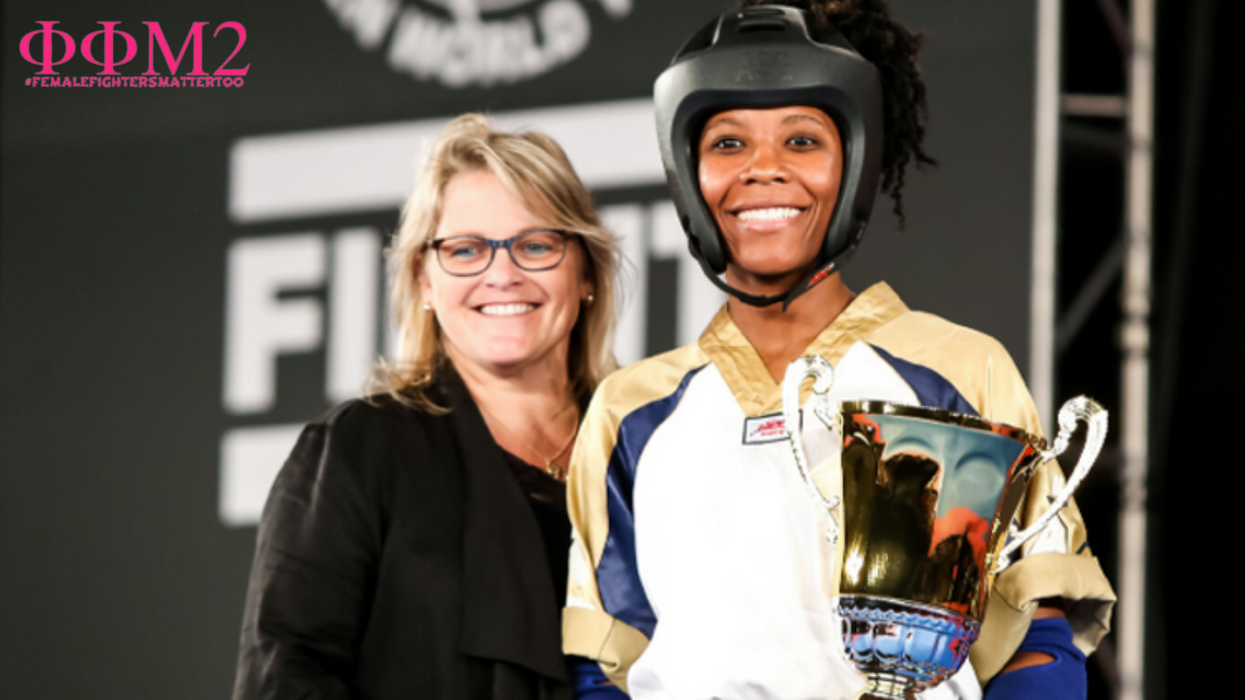 A Champion's Push for Equality and Opportunity & the Female Athletes Fund

Maggie Messina often asked herself this question as she competed in the 80's and 90's, her division squished into the gym corner between the bleachers and bathroom. Women pay the same registration fee to compete and sacrifice the same amount of time and sweat during training. And yet, they don't garner the same respect as the male competitors who are honored to compete on the center stage, elevated above their female counterparts by cash winnings that offer twice as much reward for their hard work.

Messina went on to win several world championships across multiple sport karate circuits (including KRANE, WKC, ISKA, NASKA...) but put her competition life on hold when she opened Taecole Taekwondo in Albertson, New York. After establishing Taecole in her community, Messina returned to national and international sport karate competitions in 2014 as a competitor herself and to coach her own student athletes.

Society's attitude toward women has come a long way since the 90's, and Messina was shocked to see inequitable practices that were still held up in sport karate events. The most glaring issue being that female competitors often earn less than half of what male competitors earn as a grand champion. Every competitor participating in an event should be valued equally, and it is the responsibility of event coordinators to make them feel special and important no matter their differences. This just didn't seem to be happening yet.

Experiencing this inequality was Messina's inspiration for founding the Female Fighters Matter Too (FFM2) movement, a campaign focused on creating opportunities for female athletes. Messina is not new to advocating for female athletes either. Growing up in the 80's in the foster care system, there were limited opportunities for Messina and other girls to participate in sports. Her desire to compete drove her forward though, and Messina landed positions on both the boy's football and basketball school teams through sheer determination and willingness to play. This was a revolutionary move in the early 80's, and helped pave the way for an expansion of girl's sports in her school district. When Messina faced similar obstacles to women's participation at martial arts tournaments, she knew she would be the one to overcome them.

Messina began the Female Fighters Matter Too movement at the Long Island Winter Open Martial Arts Championships, an event that she ran in New York for five consecutive years. She made history there by making it first event to award female grand champions double the prize earnings of any other division. She continued the momentum for female competitors by sponsoring other events all over the United States to follow suit, often donating money out of her own pocket to support the cause. The increased prize offers motivated more female athletes to register for the events which also raised expectations on promoters, pressuring them to provide more divisions for women to enter into and win! Since then, Messina has constantly challenged tournament circuits, promoters, instructors, and competitors to join the movement so that this becomes a lasting change in the sport karate industry. FFM2 has broken through the initial barriers, and the only way forward now is with the collaboration of the women and men that make up our sport.

Messina's actions under the Female Fighters Matter Too movement have also launched a plethora of female focused events in the sport karate world. This includes multiple training seminars and camps led by female champions for female students only. Due to Messina's generous contributions, these events were even provided to the female athletes for free! "We need to get strong women in front of our young girls so that the next generation of women learn how to lead and succeed" commented Messina. "Our ladies must show up to spearhead this movement if we want to make a permanent change for the next generation of female martial artists."

Messina's Female Fighters Matter Too campaign works to empower women outside of Sport Karate too. Messina has toured the country as an influential speaker, inspiring confidence in women and encouraging them to break through barriers that keep them from their life ambitions. Messina uses her own life example and accomplishments as a basis for proving that nothing can stop an individual with the perseverance to reach their dreams.

During the Covid-19 pandemic, Messina has continued to push the Female Fighters Matter Too movement forward tirelessly. With physical distancing challenging everyone's emotional endurance, it is more important now than ever to stay connected to the community, our role models, and friends. Messina has heroically found ways to provide almost all of her campaign's services in a format that can be accessed during the pandemic. She has created virtual seminars, led online classes, and even supported virtual competitions so that women and young girls can stay active and involved with their community.

Messina also began the Female Athletes Fund to provide for women and girls who need financial support to continue participating in sports.

The Covid-19 pandemic has strapped so many families of their security, and every bit of help for young, female athletes goes a long way towards helping them recover a small part of themselves. 100% of the money raised by the Female Athletes Fund goes directly to supporting female athletes and sports teams - both in and outside of martial arts. If you have the capacity to support this fund, you can find it at gofundme.com under the title Female Athletes Fund.

Up next, Messina continues to sponsor sport events, athletes, and teams with stipulations to get more women into the sport and provide equal opportunities for them to learn, grow, and succeed! Visit Maggie Messina at Swerv4Change.org or Female Fighters Matter Too on Facebook or Instagram.