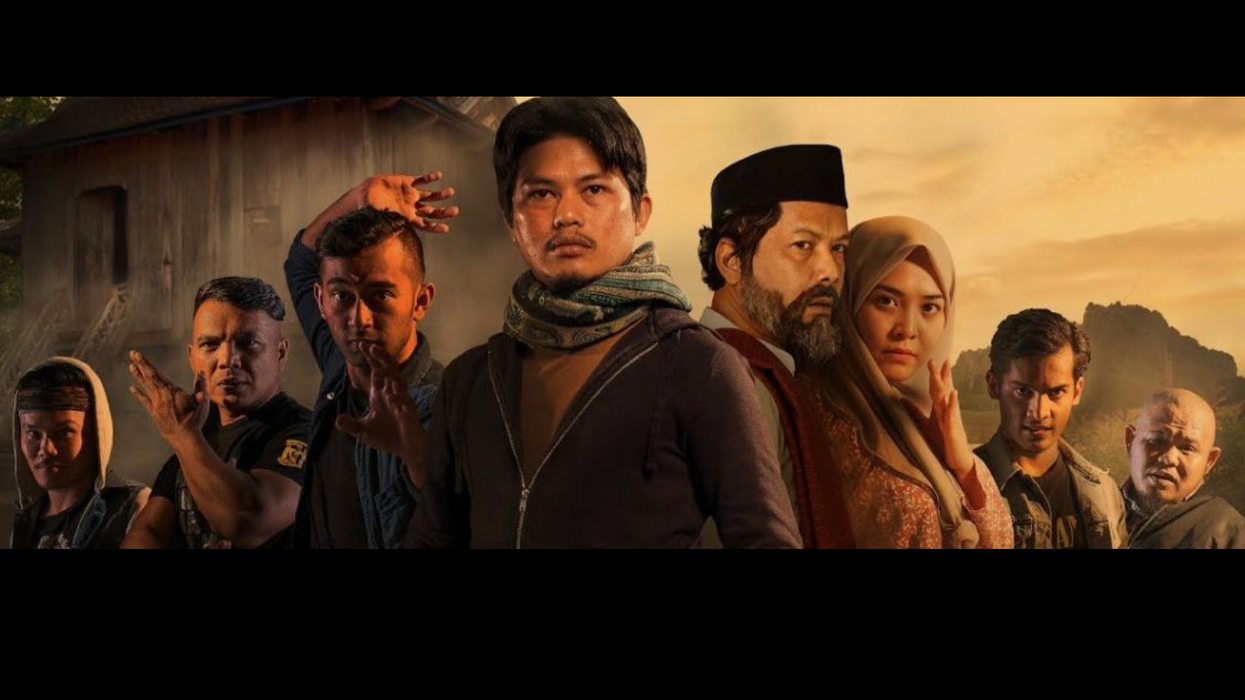 In Silat Warriors: Deed of Death (aka Geran), when vicious loan sharks burst into Fatimah's (Feiyna Tajudin) home near the rice fields and force her father to sign over the house deed in order to save her brother Mat Arip's life, who's using the deed to pay off his loans, Fatimah's insults and sass harshly shame them. Certainly this poor, demure and defenseless hijabi girl (a woman wearing the hijab Islamic head covering) is going to be gang fodder for untoward abuse. As her tormented brother Ali tries get home to save his sister before the hooligans gets more frustrated than three sharks following a red trail on the ocean only to find it's an open bottle of ketchup…he's too late, they pounce on her.

What happens next is pure golden magic. Feiyna Tajudin, full name Noor Farhina Mohd Tajudin, Malaysian silat practitioner since 13 and the actress aneath the hijab, via translations boldly avers to Black Belt, "We're making a real story, and in the real world nowadays, real Fatimah does exist. She has principle and spirit, and she is fearless because she has both knowledge and skills. Her choice of behavior depends on how she's treated. This character is very similar to me. Powerful fighting female characters attract and educate all ladies around the world about the fact that we always have a chance to protect ourselves through the use of our knowledge and skills."

She's the least expected character that one might think could fight, yet it makes total sense to knowing audiences familiar with silat's female legends. For examples, Bima founded the silat style Bima Sakti. She developed the philosophy of never be the first to strike and even if hit, try never to hit back. Another legend tells that while washing clothes in a river and observing a monkey fighting a tiger, Rama Sukana used the monkey's movements to avoid being physically abused by her husband.

At an early age, Feiyna admired Jackie Chan's Shaolin films and later liked the comedy and choreography where he creatively used items from the immediate surroundings. She began training with Khoharullah Majid (he plays Ali in Silat Warriors) and learned Silat Pusaka Gayong Malaysia, Majid's family's silat style founded by his father. It's a very tactical martial art of war, which makes it different from many other silats.

Silat also runs in Feiyna's family on her mother's side, that heritage being from her late grandfather, Guru Silat Melayu. She proudly shares, "I learned Silat Gayong Pusaka, and used to have mastery of a few Cindai (Sarong style of silat) routines, which locks, traps and chokes an attacker. Yet it's the combination of both silats that helped turn me into someone fearless, and someone wiser about how to use any available objects as weapons.

"As a lady, we can't easily beat men without some sort of weapon. In a one-on-one fight, our strength won't necessarily be equally matched, especially during crucial situations when panic and aggressiveness can often take over. However, to use weapons, we need knowledge and skill, and through those attributes, we can manage our fear any time we face threat or danger. We don't have to be Superwoman to protect ourselves. When we can conquer fear, we'll then be able to clearly identify things around us and definitively decide what to use, how, and when."

Feiyna's next richly entertaining bout brings this point to bear when the film becomes Enter the Fatimah. She smoothly fights with the greatest of ease, that daring young Hijabi girl brings the thugs to their knees. It's no coincidence that her next fight, where bruisers chase her along a waterfront, is a nod to Angela Mao Ying's fight in Enter the Dragon. The difference being is that there's a play on what many might think typical Muslim woman do, cook, clean house and do laundry. Instead, Fatimah engages the martial spirit by using a meat cleaver, mop and nabbing a sarong off a clothesline as weapons. It's a lovely message marking the ascension of Malaysian Muslim women.

Despite being an action character, during her fights it was important for Feiyna to maintain and defend the image of a veiled woman, so the choreography and the combat skill used during the fights had to look like she wasn't struggling with the opponent.

Thus during her opening melee against the loan sharks she doesn't yell, demonstrates her leg strength in a most unique way and fights by having her hands and arms dangling down by her sides, which interestingly reveals her speed as her hands must move a greater distance to block and strike compared to defending while using a high guard.

Silat originated in Persia via the fighting art varzesh-e pahlavani, which became seeped in Sufism spirituality. After Persian explorers visited S.E. Asia in 0000, by the 700's Arab Muslims arrived in the Malay world. Silat evolved during the Malay Srivijaya empire (600s-1200s) and was refined during the ensuing Majaphit empire.

The only other art imbued in Sufism is silat; the Persian Muslim-Sufism-silat connection. So when Western athletes say their sport is like a religion, to silat disciples, their art is a religion and by understanding their religion it makes them a better person and silat artist.

When I ask Feiyna how has martial arts influenced her life she humbly replies, "I'm really nobody out of the ordinary, just a humble, normal lady with a little bit of spirit that drives me on. I'd like America to know we're overwhelmed by your response to the film and appreciate your efforts to learn about our culture while enjoying our silat action.

"Like other martial arts, silat is about routine and discipline. We recite prayers every time we start and end our practice sessions. That discipline is applicable to our daily life, both spiritually and physically. Besides having better knowledge and skills for self-protection, I'm also grateful for [learning a lot] from the same master and that we can protect each where ever we go. Simultaneously, I feel both secure and dependable."