Only Three Fingers Needed to Fight 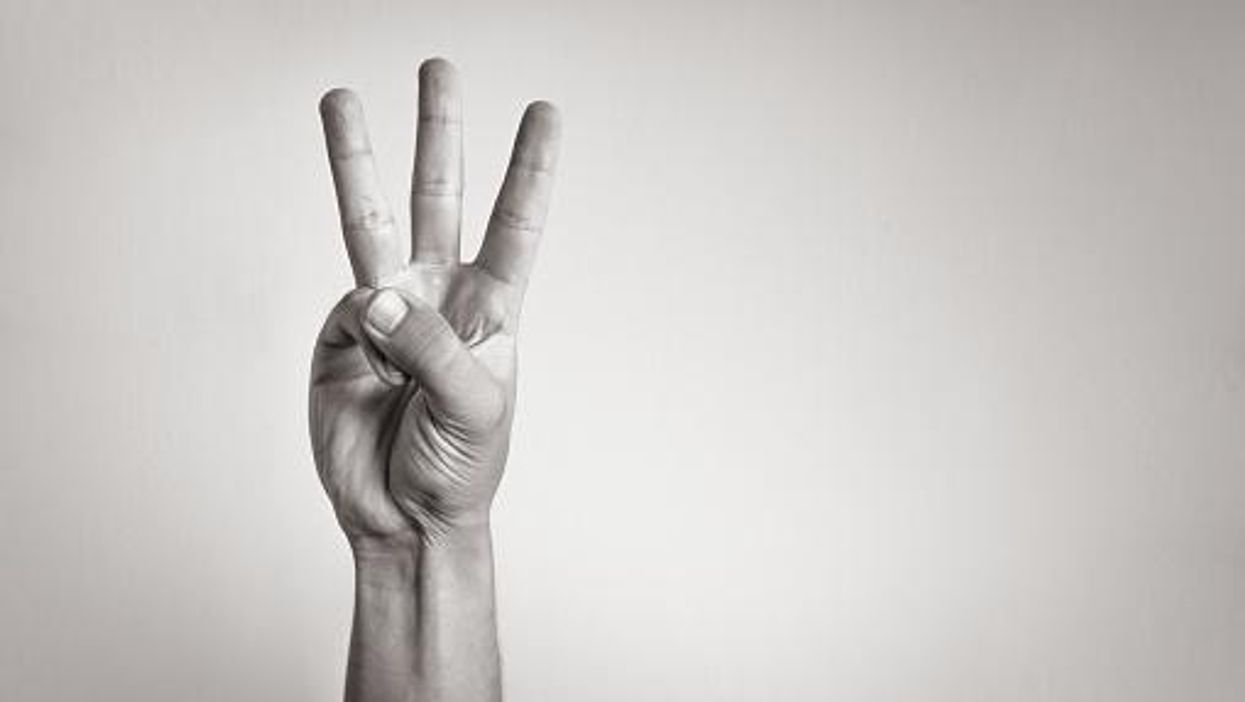 Hold up your hand in front of you and extend out horizontally only three fingers. Keep the remaining two folded.

You have just completed the 4 Types of Learning Styles used by teachers, and even many martial arts instructors.

That's exactly how my use-of-force instructor at the police academy explained to my class the three elements required before a police officer can legally defend himself or herself physically, which also happens to apply to civilians. To this day, over two decades later, I can still picture in my mind the instructor holding up his stubby sausage-like fingers and naming each element. This method works, and I want you to remember it as well, because these three words are extremely important for every martial artist.

To use your self-defense skills legally there are elements that must be present: means, opportunity and intent. If an element is missing, and you use physical force anyway, then you may find yourself in the position of being "the bad guy" in the eyes of law enforcement and the judicial system. If all three elements intersect, like you see in the graph, then you have the proverbial "green light" to defend yourself.

The aggressor must have the ability to commit the crime. For example, if a drunk man threatens that he is "going to shoot everyone in the building," but he has no firearm in his possession, you can't fight him since he does not have the means at that moment to carry out his threat. The only thing you can do about it is call the police and report the incident. On the other hand, if this same man says, "I'm going to shoot everyone in the building" and he starts to reach into his coat pocket as if reaching for a weapon, you can stop him. The act of reaching into a pocket after the threat indicates that he may have the means to carry out his threat. Of course, anyone who displays a weapon in a hostile manner, the means is obvious, and do what you must do to survive.

There does not have to be a weapon present to determine whether he has the means to hurt you. If someone is empty handed, and he threatened to beat you up, and he looks physically fit enough to do it, then go ahead and use force if you have no other options. Yet, if he is so drunk that you know that he couldn't possibly hurt you, you can't beat the crap out of him, because he does not have the means to effectively carry out his attack.

A man is coming through the door of this restroom with a gun (a rubber training gun). "Gunshots" were heard in this business just prior to this entrance. The student on the left does a door ambush as the man comes in. Although the man did not say anything to the student, the student defends himself because the man fulfills all three assault elements: means – the gun, opportunity – he's coming through the door and the student has no escape, and intent – implied intent that he is going to shoot the student based upon previous gunshots and coming into the restroom in a threatening manner.

To legally defend yourself the aggressor there must have the immediately opportunity to commit the crime. If a man threatens to beat you up, but he's in a wheelchair as a paraplegic, you cannot start pounding on him if you can get away from him faster than he can wheel himself up to you. On the other hand, if you're in an elevator with this same wheelchair-bound man threatening to strike you, you may have no choice but to push him away from you or strike him to make him stop his attack. The confined space, with no escape, gives the aggressor the opportunity to carry out his threat, and gives you the legal right to defend yourself. If someone you know calls you on the phone and tells you that they are going to kill you, and they indeed have a gun in their hand, you cannot grab a weapon and drive over to his location to "defend yourself." The situation is not immediate, and therefore lacking opportunity. Sure, you'll take the threat seriously, but the correct response is to call the police. Such a threat comes under the heading of "terrorist threats" in most states, and it is against the law. Yet, if that same person were standing in front of you with a gun, and he tells you that he's going to kill you and then starts to raise the muzzle in your direction, you have all three elements present for self-defense, even up to using lethal force.

A man jumps in front of a car and fires shots through the front windshield. The driver and the passenger duck. The driver has all three assault elements present to put the car into DRIVE and run over the shooter: means – a gun firing through the windshield, opportunity – the man is in front of the car, and intent – if they had not ducked in time the driver and passenger would have been shot. The gunman has made his intent known by trying shooting at his victims, which is a few felonies being committed.

Intent is the mental state of the aggressor at the time of the crime. If the aggressor tells you what he is going to do to you, then he has informed you of his intent. That's an easy one. However, not all attackers will tell you what they plan on doing to you. However, you can make an educated guess as to what he is thinking (implied intent) based upon his actions. For example, if you're at an ATM machine withdrawing some money, and a man walks up to you with a knife in his hand, you can reasonably assume that he is about to rob you. With a knife in his hand, you know that he has the means to do the crime of robbery (theft of money by force or fear by brandishing a knife). You know that he has the opportunity, because the ATM machine you're at is a way for him to get money. You can imply the intent of robbery because a normal person will not approach someone at knife point while they're withdrawing money. Only a robber would do such a thing. However, if the man is across the street wandering around in a confused manner waving a knife, you can't assume he's about to rob you. Yes, he has the means, but the immediate opportunity is missing. The man may be a mentally disturbed person, he may even be in the process of committing a crime across the street, but since he's not approaching you, the intent against you is not evident. The only thing you can do, like any good witness, is get out of there, or observe and report.

Knowing the three assault elements will guide you in making the right legal decision as to whether you're facing a legitimate self-defense situation or not. Then, if you must your martial arts skills to defend yourself, knowing the three assault elements will also help you articulate the justification for using force to the law enforcement officer, and perhaps your defense attorney if charges are filed against you.

BE A HARD TARGET.