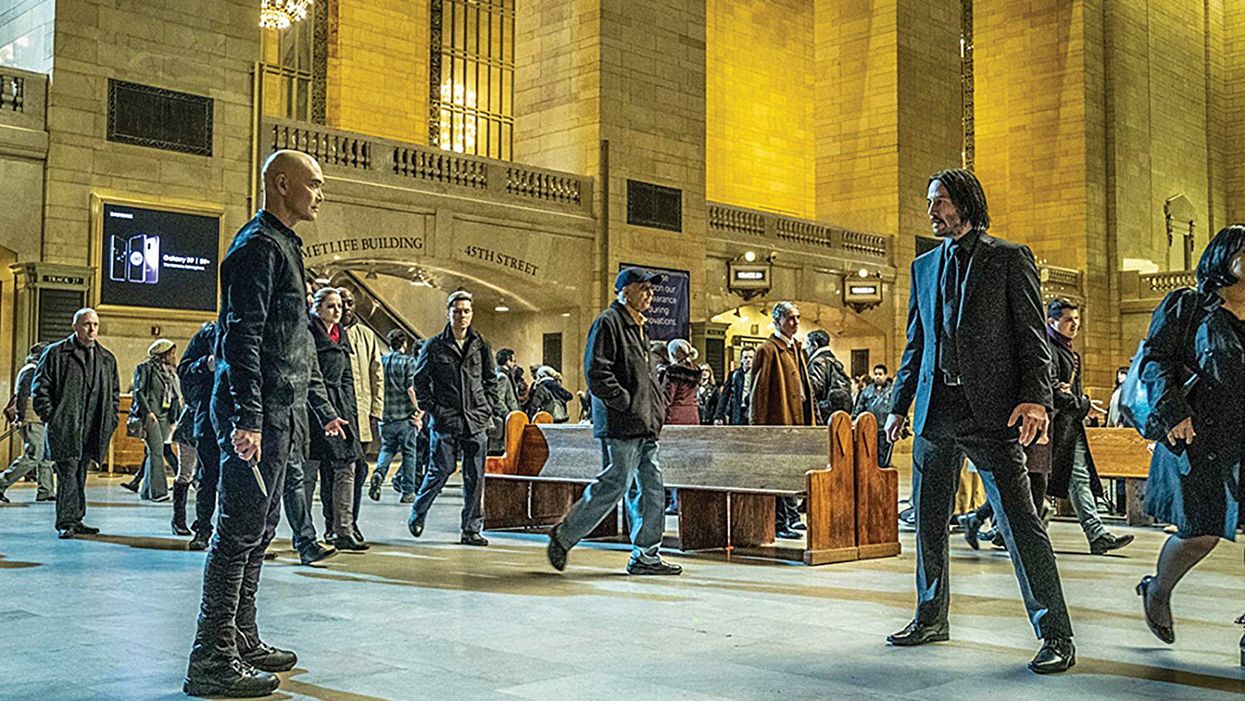 With John Wick: Chapter 3 — Parabellum ($75 million budget; $314 million worldwide box office as of press time), director Chad Stahelski has finally done it! He's created a superbly made American movie, filled with innovative fight and camera choreography that matches the creativity of the man he accidentally learned from, Yuen Woo-ping. Yuen, you may recall, did the fight choreography for 1999's The Matrix and is still considered one of best directors of cinematic combat in history. Now, you're probably wondering what I mean by "accidentally."

For The Matrix, the Wachowski brothers wanted frenetic-paced, over-the-top, Hong Kong–style martial arts action, and they wanted to shoot it in a way that no one had shot martial arts action before. They needed two things: cutting-edge special effects and a Hong Kong fight director.

Their first choice, a man named Ching Siu-tung, wasn't interested. Their second choice, Yuen Kwei, was busy. Yuen Woo-ping, their third choice, was reluctant. Not wishing to make the brothers feel bad and thereby cause the Hong Kong film community to lose face, Yuen assumed that requesting an exorbitant fee would cause them to move on to their fourth choice. But they didn't. Yuen then assumed that if he asked for control of the fights and insisted that the main actors train in martial arts for four months — thus precluding them from doing other film work — the brothers would pass. But they didn't. The rest is history.

Since The Matrix was made, it's become standard for actors to engage in serious martial arts training for their fight roles. This notion didn't escape Stahelski, who while serving as Keanu Reeves' stunt double in The Matrix learned to embrace the importance of training the actors and quickly recognized the value Yuen placed on camera choreography as he put his fights together.

Stahelski understood that if actors did their own fights, they would be more engaging and forge a stronger emotional connection between the viewers and the characters. That notion shines though in John Wick 3 in that even though he's a ferocious killer, he's still lovable.

The paradox of Parabellum is that what poor Wick suffered through during the past few weeks — as depicted in the first and second movies — is far from funny. His wife is painfully dying (which is the reason he left the world of assassination). His car has been stolen. His house has been blown up. And he watched his dog get killed by Russian thugs (which is the reason he's back in the world).

The third movie begins where the second ended. Hours after Wick broke the cardinal rule of the assassin's code, he's excommunicated from the organization and a $14 million bounty is slapped on his head. Now every assassin and his pet cat will want to scratch him out! On a dark, rainy night when the clock strikes 6, apocalyptic action, mesmerizing mangling and grisly grappling are only moments away, and Stahelski grandiosely delivers with an exquisite 15-minute combative dance that's worthy of any ballet company.

Watching the fights of John Wick 3 is like watching a villain getting kicked in the groin. Then, as the groin kicks become more stylized and gritty, you can't help but laugh because it's so outrageous.

The most impressive action sequences in the third film are the opening 15-minute use of book knowledge, the flying blades of death, the barnyard dance and the motorcycle chopfest inspired by the 2017 Korean film The Villainess; Sofia and John's crazy gun fu–infused fight; and the last 20 minutes, which feature more bullets than a Rambo film, shattering-glass shenanigans, a karambit crunch with two silat stylists in which the whole affair climaxes when sushi chef Zero (Mark Dacascos) battles Wick.

When I first met Jackie Chan on the set of Drunken Master II, he told me that fight choreography is like a dance and that you have to know how to move the camera like a dancer. Over the years, Stahelski has fervently tapped into this energy through his passion for ballet dancing and his respect for the long hours of training that ballerinas go through. He gives a nod of grand reverence to these dynamic ladies in John Wick 3.

"It looks like martial arts, it looks like fights, but it's really dance," Stahelski said. "Ballerinas and gymnasts are some of the toughest athletes I've met. For my choreography team, I insist they study from dance. You need an incredible memory to do it."

That's part of the reason John Wick 3 is a step above every American film that uses aggressive camerawork, quick cuts and close-ups to obscure the action and hide the fight-challenged actors. In contrast, Stahelski's fights have less editing, use many wide-angle shots and, most impressively, feature frequent use of long takes that often include 20 to 25 techniques per shot. This kind of fight is quite close to dancing. Watch the old black-and-white Fred Astaire films in which two- to five-minute dance routines use three to four shots. Live shows that take place onstage — like in Beijing opera — have fight sequences that are even more amazing: one long take.

"It immerses audiences into the action," Stahelski said. "With wide angles, you can't hide the hits or misses when guys are swinging, punching and kicking. We do grappling and gun fu, so I can show you angles that most fight guys don't because I don't have to hide as much."

Stahelski is the only American director I know who includes the cameramen in the fight rehearsals. In John Wick 3, they worked with the stunt team for several months, learning their own kind of choreography. "If the camera guy doesn't know the moves, what good is it?" Stahelski says. "Best way to fake good is to be good."

For this reason, Reeves spent five months honing his martial arts skills and engaging in intense training sessions with the handgun, rifle and shotgun, which included shooting and moving with each weapon. Evidence of his diligence can be found in the movie's combat scenes, when Wick shoots and reloads, sometimes swapping five or six magazines in one take. Even more impressive are the rapid-reload sequences with the shotgun.

For Halle Berry's role as Sofia, an old friend of John's, it was imperative for the ballistic-ballet and pugilistic-pounding duo to look like they'd learned the same skill set while growing up and plying their assassin trade together. Berry's seven months of training were designed so she would be able to fight like Reeves and perform side by side with him when they take on dozens of thugs in the desert compound.

Their shooting and grappling battles were filmed with long takes and wide angles. Berry is mesmerizing. She was candid about her role and its deeper meaning: "I wanted to shatter some stereotypes here. There's nothing I wanted to do more than to prove that women of my age can do exactly what we want to do. Age doesn't define us."

The biggest difference between John Wick 3 and the rage-and-blade films that star, for example, Iko Uwais and Tony Jaa is the intent that underlies the brutality. Both highlight violent fights, blood-and-guts gore and spurting-artery visuals, but the movies of Uwais and Jaa seem more disturbing because they're meant to be taken seriously.

In contrast, John Wick 3 conveys no sense of atrocity or fear during its hero-vs.-thug duels because they're comical. As they progress, the slicing and dicing gets more humorous — it shouldn't be that way, but it is. The manner in which Wick tosses an ax across the room and whacks stuntman Roger Yuan is entertaining and furiously funny. It's not bloody for the sake of being bloody but for the absurdity of it. The scene shows that although Wick is a morose, scary, impending-doom-and-gloom sort of fellow, he's also a likeable dude.

The way Stahelski balances the action between fight and camera choreography is superb. It's not about opposition involving two adversaries; it's about the rhythmic partnership of a waltz involving two choreographies with each contributing to the resulting battle. It's a dance adage brought to life: It takes two to tango. Perhaps more appropriate in this instance, it takes two to tangle.