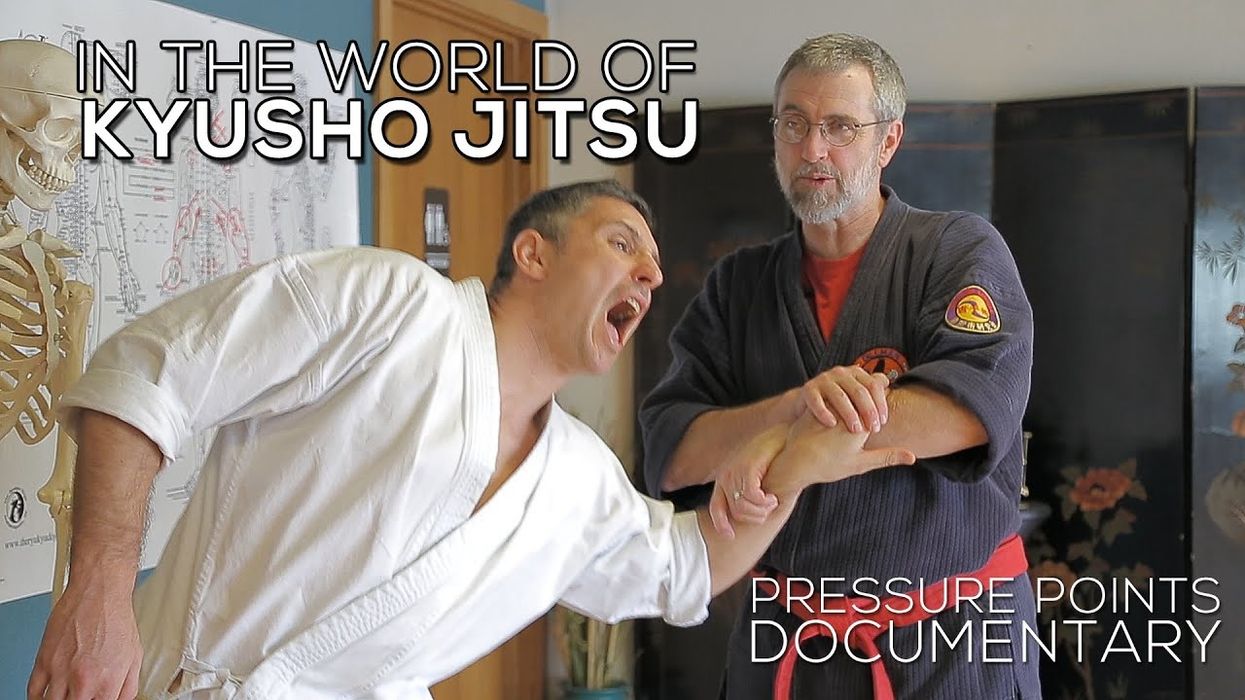 In the martial arts community, those who practice kyusho-jitsu (pressure-point fighting) are often subjected to criticism. It all started when their self-defense moves were first brought into the limelight and onlookers didn't even want to believe the techniques were real. Those days are long past, however, and the reality of knockouts resulting from usage of human pressure points has been convincingly demonstrated time and time again — most notably by Black Belt Hall of Fame member (and kyusho-jitsu expert) George Dillman and his students. Nowadays, two main criticisms of kyusho-jitsu persist. The first consists of dire warnings that self-defense moves using pressure-point techniques are dangerous and that those who practice them by actually knocking each other out are reckless and foolhardy. This accusation was later found to be groundless.

Are the Self-Defense Moves of Kyusho-Jitsu Dangerous?

For decades now, the once-secret art of kyusho-jitsu has been publicly taught and demonstrated. Thousands of students now practice the methods of kyusho-jitsu, and an untold number of people have been knocked out practicing its self-defense moves, some on numerous occasions.

In 1997, at the Hospital of the University of Pennsylvania in Philadelphia, a team of scientists sought to examine the mechanism behind human-pressure-point knockouts. In their findings — which were reported in Black Belt's September 1998 issue and subsequently published in the Journal of Sports Medicine and Physical Fitness (1999; 39:328-335) — they stated that “… no hazardous complications were demonstrated and no immediately dangerous phenomena … were noted."

Nonetheless, claims regarding arts like kyusho-jitsu and the dangers of human-pressure-point techniques persist like urban legends. Yet no one seems to ask the most natural questions in the world about these self-defense moves: “Where are the bodies? Where are the legions of martial artists whose health has been ruined by these strikes?"

This response to the claims of associated dangers eliminates the need to address the issue by comparing pressure-point strikes to free sparring, yet it still should be done.

In free sparring, martial artists regularly suffer damaged joints, concussions, broken bones and even occasional death — all while participating in “no-contact" sparring. When the action is intensified to the level of full-contact fighting or boxing, the potential for injury is even greater, yet few ever accuse practitioners of those sports of reckless disregard for others.

Let's be honest: Despite the cautionary advice of those who don't practice arts such as kyusho-jitsu and really don't know anything about it, there's no evidence to support the persistent cry that the practice of self-defense moves utilizing human pressure points is “reckless and dangerous."

Other Criticisms Regarding Kyusho-Jitsu's Use of Human Pressure Points

The second criticism of kyusho-jitsu is that the human pressure points that must be activated are too discreet to be used in actual fighting. Those who make this claim always preface it by admitting that the points are for real and that they actually work in demonstrations. But in real combat, they insist, it simply isn't possible to hit such tiny human pressure points.

Setting aside the fact that the whole point of training is to learn how to perform high-level tasks under stress, it must be acknowledged that it is difficult to accurately hit a small moving target. This point has been articulated in many ways, but one of the best versions is this: A brain surgeon can perform a delicate operation, but can he perform it while the patient is running around the room?

Such a pithy summation of the problem seems to end the discussion among those who have no knowledge base from which to respond. However, the educated response of a person who practices self-defense moves involving human pressure points is simply: “You're right. If you want to perform brain surgery, you first have to strap down the patient."

That statement leads to what might be called the thesis of kyusho-jitsu: If the opponent is unable to move, it's a whole lot easier to hit a point on his body. So the first rule of the art is to aim for the points that aren't moving because they're the easiest to hit.

The second rule follows logically: Do something to make sure what you want to hit isn't moving.

Consider the following self-defense scenario: An irate assailant reaches out with his left hand, grabbing you by the right shoulder to stabilize his intended target. (This is how the engagement portion of many bar fights begins.)

But the moment he grabs you, all the human pressure points of his extended left arm are motionless and easy to hit — really easy to hit. Those areas should be the first targets for your response.

So if you're a kyusho-jitsu practitioner, you might employ the ever-so-mundane karate technique known as morote-uke, which would normally — and inaccurately — be called an “augmented block."

Now, it's important to be honest and admit that, as the victim, you're probably going to be caught off-guard. (Otherwise, you would have left the scene to avoid a physical confrontation.) As a result, when you're grabbed, your hands will probably rise in a natural warding-off gesture, obstructing the attacker's first punch. It's likely that, as he winds up his right fist to try again, your brain will catch up with the situation and your kyusho-jitsu training in self-defense moves will kick in.

Immediately, you slam your left forearm into the middle of his left forearm at a pressure point called LI-7/wenliu, pinning his left hand against your body. At the same time, you use your right fist to strike near his elbow, at a point called LI-10/shousanli. This action causes his right shoulder to turn back and away, and it makes his left arm fold.

The performance of morote-uke calls for one hand to be squeezed tightly against your torso while the other hand strikes out. If you simply continue the energy of your strike through LI-10, pulling your right forearm against your body, the attacker will be trapped and helpless, with his head motionless and within easy reach of your left fist. A blow to S-5/daying will generally finish the altercation.

Lesson learned: Before striking to the head, which can be highly mobile and difficult to hit, trap and control the attacker so his body and pressure points are immobile.

In another example, again using morote-uke, the attacker grabs you with a two-handed lapel hold and pulls you in. This is a typical prelude to one of three actions by the attacker: a head butt, a knee to the groin or an attempt at some bad-breath-in-your-face intimidation. Of course, you have no idea which tactic he'll use, so you must respond on the assumption that he intends to inflict bodily harm and not merely olfactory offense.

As you're pulled forward, you borrow the attacker's energy to move at a 45-degree angle. That takes you away from the line of his strength and places him in a somewhat awkward position.

At the same time, you strike inward, hitting his arms simultaneously on the LI-10 points on his forearms, causing them to collapse inward. Then, with one hand, you trap his arms against your body and use your other hand to strike the S-5 point on his head.

In both examples, hitting those “tiny targets" is extremely easy because you're aiming for points that are immobile — immobile because of the actions you just took. And in both situations, the confrontation is in a self-defense setting, a real-life scenario and not a mutually agreed-on match or some stylized one-step sparring drill involving a lunge punch delivered from across the room.

In both examples, the response's utilization of human pressure points is essentially the same, meaning you don't have to stop and think about what to do under different circumstances. The scenarios demonstrate that human-pressure-point fighting isn't just about attacking points on the body. It's about learning a comprehensive approach to self-defense moves and the traditional martial arts, one that takes into consideration the real dynamics of violent encounters.

The Final Word on the Safety of Impacting

Chris Thomas is a frequent contributor to Black Belt and co-author (with George Dillman) of a series of books on pressure-point fighting. For more information, visit dillman.com.

Black Belt Team
one championship
a.espncdn.com
Victoria "The Prodigy" Lee has set ONE Championship on fire in 2021 with two successful mixed martial arts victories inside the Circle. Now, the teenage sensation returns for another stiff test when she meets Victoria Souza at ONE: Revolution on Friday, September 24.
Keep Reading Show less

The Triller Fight Club pay-per-view platform has gained immense popularity recently by hosting pop culture-fueled boxing matches such as Logan Paul vs Floyd Mayweather and Jake Paul vs Tyron Woodley. They were back in action on Saturday night with a card that featured multiple MMA legends as Vitor Belfort challenged Evander Holyfield and Anderson Silva went toe-to-toe with Tito Ortiz in a boxing ring.

The first of these two bouts was the showdown between former UFC champions Ortiz and Silva. Ortiz came out swinging with a series of punches, but they were simply too slow for the elusive Silva. Silva ducked under a series of punches, connected with a hard right hand, and followed with the left to send Ortiz to the canvas. In just 81 seconds, Silva knocked out his fellow 46-year-old combatant and improved his boxing record to 3-1. Before Ortiz, Silva also defeated Julio Cesar Chavez Jr. via split decision back in June.