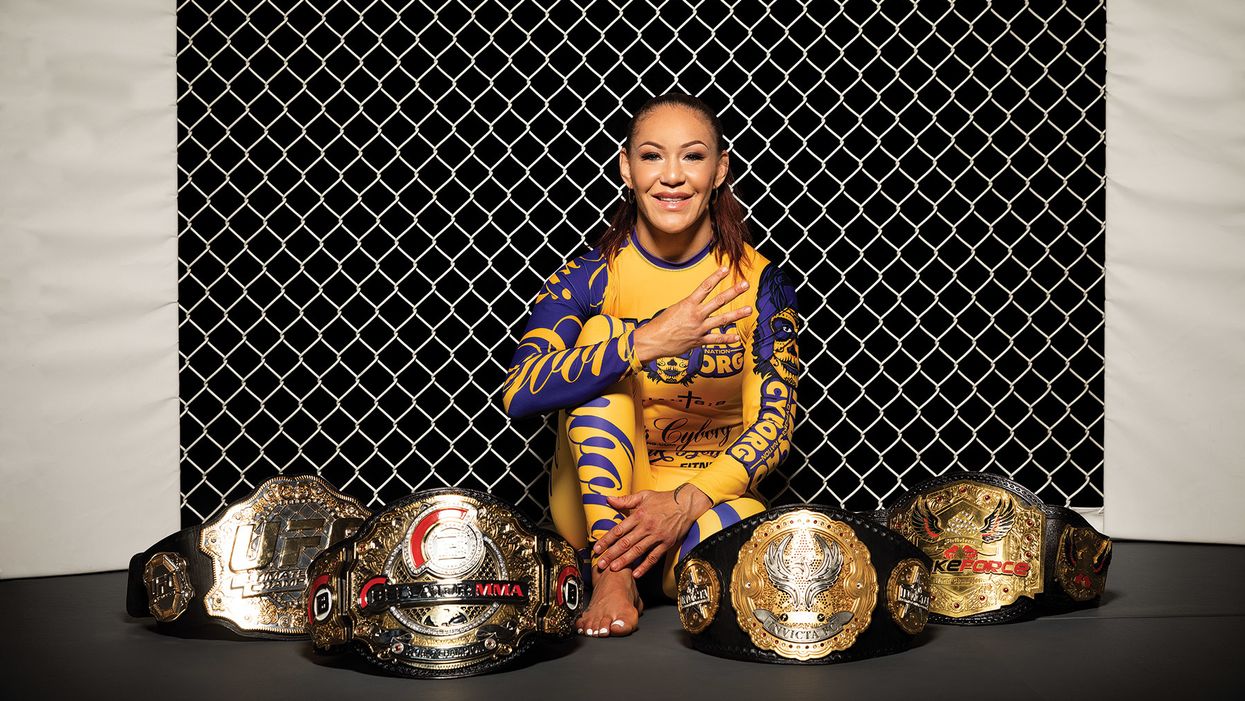 She Fights Like a Machine, But Cris Justino Is a Mixed Martial Artist to the Core

Cris "Cyborg" Justino bears a nickname that's become synonymous with the mixed martial arts — mostly because of her impressive 22-2 record, with 18 of those victories having come by way of TKO. Her last dominating win, over muay Thai expert and former Bellator champion Julia Budd, led the Brazilian to an MMA milestone the likes of which no fighter, male or female, has ever achieved:

Justino has been a featherweight champion in not one, not two, not three but four of the largest MMA promotions in the world. For the record, those promotions are Strikeforce, Invicta, the UFC and Bellator MMA.

While the pinnacle of her fame comes from her time in the cage, she was eager to talk to Black Belt about the lesser-known facets of her career. That's because her fight life spans several styles of martial combat, and the details shed some light on how she's developed the skills that enable her to dismantle her opponents the way she does.

Justino grew up in Curitiba, Brazil, where she launched her career in combat. A city known for producing some of the best fighters in the world, Curitiba is home to the world-famous Chute Boxe Academy, where founder and head trainer Rudimar Fedrigo first recruited the young athlete into the martial arts. Chute Boxe began as a muay Thai facility, but through the years, the gym evolved in response to the growth of Brazilian jiu-jitsu and other styles. It quickly became a prime training center for vale tudo practitioners."

As a kid, I never thought I'd be a fighter," Cyborg said. "My family, they thought I was crazy because there weren't a lot of girls — especially given the Chute Boxe reputation."

Female fighters may have been few in those days, but young Justino had no shortage of mentors at the academy. She considers herself fortunate to have learned from the likes of legends such as Wanderlei "The Axe Murderer" Silva, Mauricio "Shogun" Rua and Evangelista "Cyborg" Santos.

Justino took up boxing and muay Thai immediately after joining Chute Boxe. Just six months into her training, in 2005, she was offered an opportunity to compete in an MMA bout. She had no experience in grappling or jiu-jitsu, so she quickly modified her workouts to include the missing skills. Nevertheless, that first fight ended with a loss — and was accompanied by a dislocation of her elbow.

Her attitude enabled her to transform the loss into a lesson, one that would stick with her throughout her career. The first step was to admit that she was a fighter to the core. "After that experience, I was hooked," she said. "There was no going back after that. I loved it even though I lost. I realized I was born for this."

Path to the Top

Her next step was to reboot her training so it would eliminate her shortcomings, even those she didn't know she had. She spent several years honing her jiu-jitsu, wrestling and muay Thai in an effort to round out her skill set for competition.

To prove her proficiency in those disciplines, she entered some of the world's most-prestigious competitions. In 2009 she placed third at the Abu Dhabi Combat Club Submission Wrestling World Championship, a no-gi tournament. She went on to score a first-place finish at the 2011 and 2012 IBJJF World Championship — while still a BJJ purple belt. Those performances ended her competitive grappling career with a 7-1 record.

Despite her unrivaled success, Justino has been a controversial figure in the martial arts for a number of reasons, most notably her ability to drop from her already lean 175-pound walk-around weight to her 145-pound competition weight. This, coupled with her aggressive fighting style, has led to a common theme throughout her career: She cannot find females who are willing to face her.

One wonders, If she's that dominant, why doesn't she fight men? Actually, she has — in BJJ. But even male martial artists are reluctant to take on Justino because they view such a bout as a lose-lose situation. If the man beats the woman, he's likely to be viewed as abusive or a bully. If he loses, he's incompetent.

"It's very frustrating," Justino said. "You train, train, train, and the opportunity just doesn't come — sometimes for two years with no fight. It is better now, though, with so many women in the sport, [which] is nice to see. But I have a dream, and I will continue no matter what."

That lack of opponents has resulted in Justino jumping from promotion to promotion as she pursues people who are willing to face her in the ring and thus allow her to continue her dream of being a professional fighter. On several occasions, she even agreed to compete at a catchweight of 140 pounds in the UFC, all in an effort to meet opponents at a weight at which they're comfortable.

Home Away From Home

While her heart will always be linked to the Chute Boxe Academy in Brazil, Justino has taken a unique approach to training since she moved to the United States: She regards no single gym as her home base. Instead, she maintains relations with the best gyms and the most-skilled fighters around the world so she can tailor her training to specific opponents. To prep for her two most recent fights for Bellator, she elected to train in South Africa. Far from the distractions of her hometown of Curitiba and her adopted home of Huntington Beach, California, she allowed herself to focus solely on combat.

No matter where she establishes her fight camp, Justino maintains an incredible ability to cut weight before a bout. It's not uncommon for her to drop 30 pounds in preparation for action in the featherweight division, which maxes out at 145 pounds. Weight cutting is widely regarded as dangerous, which is why it's so controversial in the sport of mixed martial arts, even among professionals.

Yes, cutting weight can give a fighter an edge over an opponent, but when said fighter starts with low body fat — as in Justino's case — it can lead to extreme dehydration and even hospitalization. Such was the case before UFC Fight Night 95, when Justino was preparing to face Lina Lansberg in the octagon at a catchweight of 140 pounds.

"I thought I was going to die," Justino recalled. "It was the worst cut of my life."

After the experience, she said she learned where her limits lay. Afterward, she would be criticized often for turning down matches at 140 pounds. However, in true Cyborg fashion, she's learned from every lost opportunity, as well as every seized opportunity. She now owns a deeper knowledge of herself and doesn't regret those extreme situations that helped her discover her limits. She now knows what her body can handle, and that's all any martial artist can ask from adversity.

Cris "Cyborg" Justino is entering a new chapter of her life as the reigning Bellator featherweight champion. She decided to leave the UFC in September 2019, and she's likely to ride out the remainder of her MMA career alongside Scott Coker, head of Bellator MMA.

When asked what her latest accomplishment means to the evolution of the sport and her relentless pursuit of personal challenges, she explained: "Four belts means for me never quit. Show my fans to never quit. I am for sure a different champion than when I was a Strikeforce champion — which is different than when I was an Invicta champion and so on. There is always more to learn, and being that type of person has led me to where I am today."

In 2015 Cris "Cyborg" Justino created a program that offers a glimpse of the passionate side of the MMA phenom: fighting for those who don't have a voice of their own. Since its inception, her nonprofit Pink Belt organization has supported women who are facing personal, domestic and health-oriented challenges. Its mission is to help them overcome their obstacles, no matter how daunting they might seem.

Justino conceived of Pink Belt as a way to aid women who have never had the opportunity to train in martial arts. It exposes them to the fundamentals of the arts, and it provides mentorship and support from Justino and what she's dubbed her Pink Belt Army.

Cyborg's Pink Belt training camps typically see 150 women participate, with many of them returning year after year to continue their martial arts journey under her guidance. For more information, visit pinkbeltfitness.com.

In her hometown of Curitiba, Brazil, a mural was painted in the Afonso Botelho square in 2016. The intention was to honor Cris "Cyborg" Justino, MMA legend. The mural was commissioned just outside Athletico Paranaense Stadium before Justino's UFC 198 bout with Leslie Smith, in which Cyborg triumphed before a capacity crowd of 45,000.

Sadly, the mural was removed in 2017 by Curitiba Mayor Rafael Greca, who believed it didn't belong there anymore.

The silver lining is that Justino had the mural recreated in her private gym in Huntington Beach, California. She did it to ensure that a part of her past that's no longer visible in Curitiba will never be missing from the story of her life as a fighter.