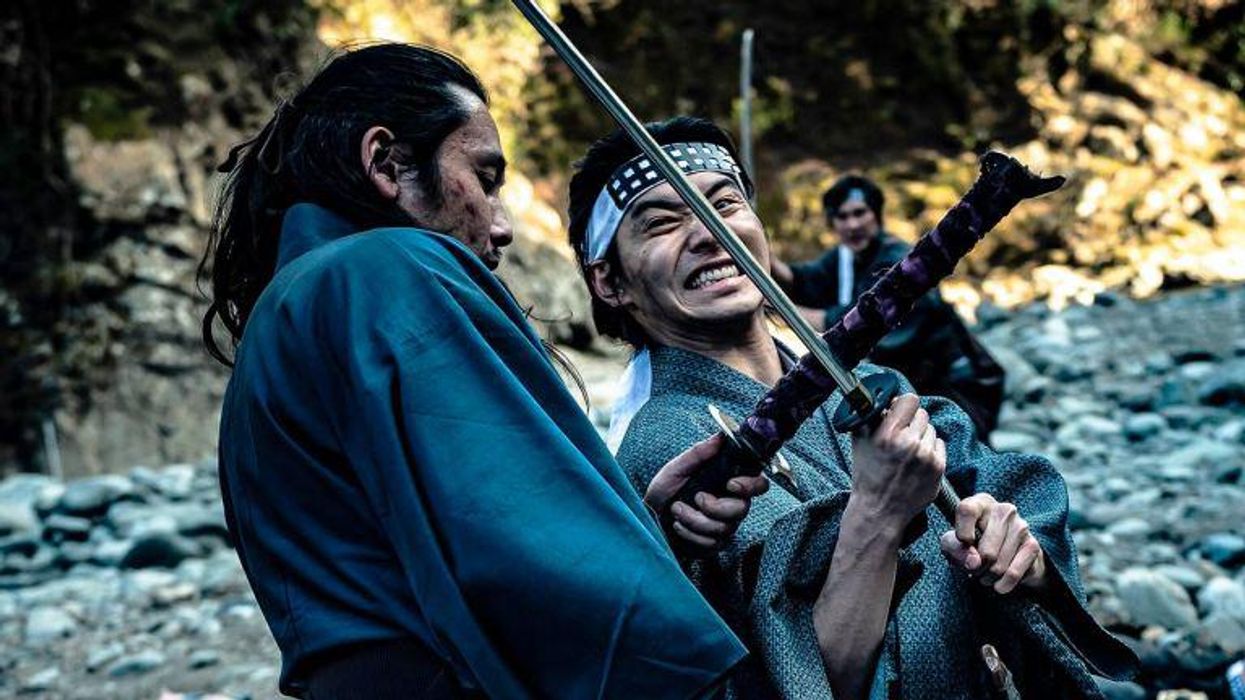 When Jimmy Wong Yu starred in Beach of the War Gods (1973; BWG) as the real-life Chinese swordsman hero, Yu Da-you (1503-1579), who's known for slaying 2000 Japanese pirates during the Wokou wars in 1556, he did a meticulously choreographed 25 minute and 43 second fight sequence that became the longest fight scene in martial arts (MA) film history. Fifty years later, the TikTok turned TakTake, mind-boggling mayhem of Crazy Samurai: 400 vs. 1 (CS) eclipsed BWG with a 77-minute oner fight. How did the lead Tak Sakaguchi and 26 stuntmen remember the choreography?

In a 2018 interview, the bajiquan, Shorinji Kempo and boxing trained Tak said there was no choreography and before the fight he asked all the stuntmen not to act or think about safety but to bring it on and try to kill him because he'd be trying to do the same to them. He added, "Five minutes into the fight I broke a finger and two ribs, and kept shooting and fought 588 men with a katana in one take."

Set in 1604 and based on real events of Japan's famous samurai Miyamoto Musashi (Tak), after defeating important members of the Yoshioka family in combat, the clan plans to restore their reputation by killing Musashi in a moor-torn abandoned village. With serendipitous coincidence, Yu Da-you's real 1556 battle and Musashi's noted clash in 1604, and the films depicting each fight, both occurred about half a century apart.

Shot in 2011, completed in 2013, CS (aka Crazy Samurai Musashi) collected dust until an Albatros found it in 2020 and Well Go USA thankfully flew it to America in 2021. Though Tak admitted there was no fight choreography, it doesn't mean there wasn't a method to their madness. Via accurate assumptions, here's the madness I deciphered.

Apart from focusing on Musashi's combative strategy reputation, like hiding food and swords along a planned fight route his opponents will unwittingly walk down, director Yuji Shimomura, pays homage to other Musashi martial moments: during a water break he switches to his renowned Kaneshige Koshirae sword, recognized for its special wrapped-in-black leather handle; wields double swords; and beats a kamagusari (sickle and chain) wielding foe.

The first fight choreography lesson I learned in Chinese MA films in 1979 Taiwan was on one-against-many attackers, where each stuntman would scream before striking, so the fighter would know when and who's attacking. CS uses this method 1000+ times.

Consider American football. An offense prepares 100 plays and each team member knows what to do. The defense prepares counters for each play. If all 22 men on the field know what the others are going to do, they could rig a play to look real when in fact it isn't. Footballers have many basic plays, yet certain plays are reserved for special moments.

The human vegematic quarterback Tak can call a fight play with a cue any time during the fight to a group of stuntmen, telling them what he wants them to do. Conversely, when Tak sees a stuntman assigned to die a certain way, it triggers a stereotypical stimulus-response behavior pattern from Tak against the knowing stuntman.

For examples. When a fight occurred on a street, grass path or small bridge, 6-8 stuntmen standing behind each other in single file, would within a few seconds and one after the other, raise their swords above their heads, scream and charge Tak, who'd guide his sword across their torsos as they ran by or as he moved forward. It's a standard combo taught to actors and stuntmen during their Tate Japanese Theatrical Combat skill training.

Note a few puffy haired stuntmen wearing padding under their wigs. Those guys die when Tak wallops the top of their heads, perhaps in honor of Musashi's skull-crushing victory over Kojiro Sasaki. One stuntman died 25+ times this way.

The fight begins with simple blocks, parries and ripostes as Tak holds his sword diagonally across his body giving each stuntman's sword a target to aim for. As the fight intensifies, other basic combative combo drills are introduced, which can also be repeatedly used throughout the fight. Certain plays will use special hack 'n whack drills.

Now and then you'll pick up mistakes and that's when Tak's instincts surface and quickly gains control as several stuntmen will react in a way that also creates an escape for Tak.

As this ferocious fight display winds down, there's short calm before the most challenging and rigorous stormy part of the fight, a finale 19-minute crazy crescendo of explosive power. How can you not respect Tak's effort knowing he fought the last 70+ minutes with an unattended broken finger and two broken ribs, without missing a beat?

Cheers to the seamless camerawork using many different angles, with wide, medium and tight shots, thusly how repetitive moves can look and feel different. The cameraman was so smooth that there'd be a tight shot on Tak's spent body and exhausted face to moments later seeing Tak in a wide angle panoramic shot surrounded by 26 stuntmen. Bravissimo!

CS is audaciously wild to witness as all the extemporaneous set pieces unite to produce an extraordinary ridiculous insane fight. The end of CS occurs seven years later with an unrecognizable Tak performing a high tempo, meticulously choreographed snazzy five-minute fight scene to remind audiences that he can handle that kind of classy action too.
From Your Site Articles
Related Articles Around the Web