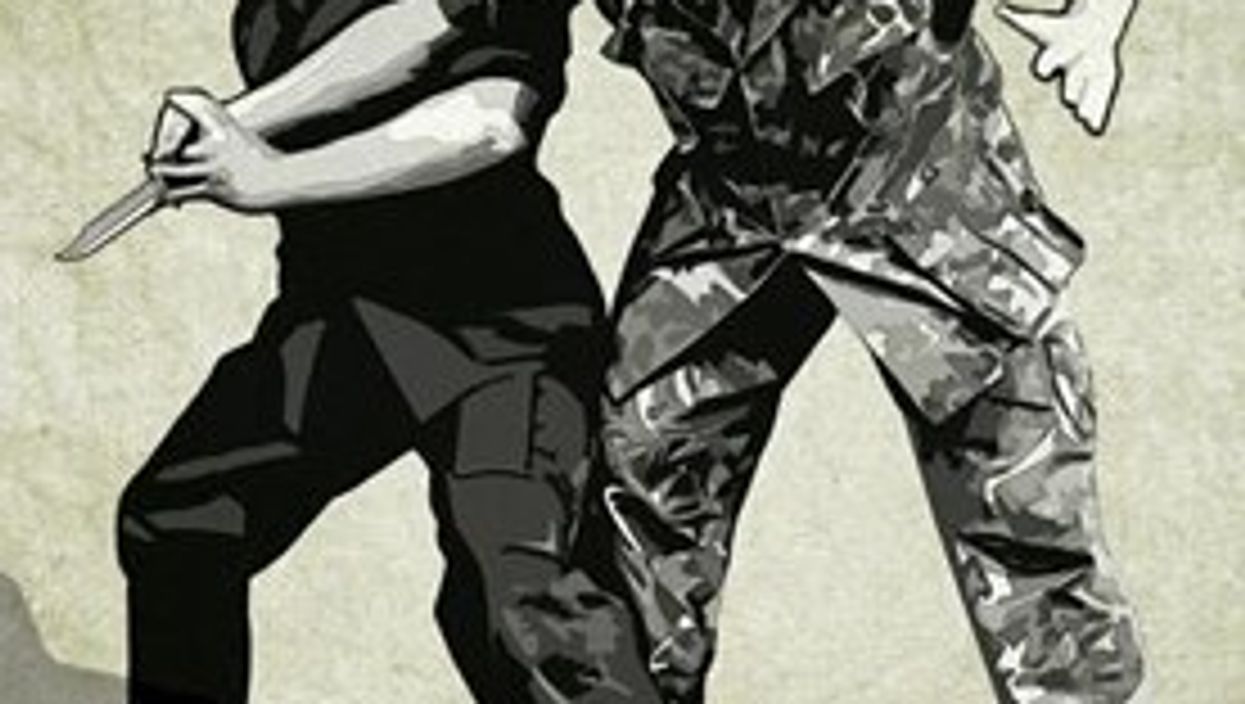 According to knife-fighting legend Michael D. Echanis, "Neutralization, stabilization and disarmament of the weapon are the essential factors in survival." Learn how to achieve these goals in this excerpt from his 452-page ominbus!

The defense against an armed assailant by an unarmed defender creates a distinct and critical disadvantage integral to the survival of the unarmed soldier. The weapon is the integral factor leading to the lethal capability induced by the weapon's presence. Regardless of size and physical power in relation to the enemy's size and physical power, the weapon makes the smallest man a lethal and formidable adversary.

Who Has the Advantage When It Comes to Self-Defense Moves Against Knife-Fighting Techniques?

In a close-quarters, hand-to-hand combat situation, a 160-pound professional soldier with quick reactions, plenty of endurance, stamina and enough power to slash a knife and cut deep will be at a distinct and lethal advantage over a 250-pound powerful and fast, unarmed hand-to-hand combat expert. The smallest man can pull the trigger of a rifle. Because the weapon is our primary concern, it becomes the unarmed defender's priority of action. Neutralization, stabilization and disarmament of the weapon are the essential factors in survival.

Get the real story behind one of military combatives'
most influential figures in this FREE e-book download!
Michael D. Echanis: The Life and Times of the
Army Ranger Training Expert and Hwa Rang Do Ambassador

How to Execute Self-Defense Moves Against Knife-Fighting Techniques

First, you must block and redirect the attack of the weapon to neutralize its lethal capability and clear the body of its trajectory of fire and angle of attack.

Second, you must stabilize the weapon by controlling the wrist, hand and weapon of the attacking arm of the enemy.

Third, you proceed to disarm the weapon by breaking the joint of the locked extremity or simply by applying power to induce enough pain for control and disarmament.

What Self-Defense Moves Are Typically Used Against Knife-Fighting Techniques?

Knife attacks are generally met with blocking, trapping and redirection of the attacking arm. The unarmed soldier evades by sidestepping while simultaneously locking the arm and using a powerful kick to a low vital target to break the enemy's base of balance and redirect his focus of attention.

The unarmed defender throws the attacker, dislocating the shoulder or breaking the elbow and wrist. Tearing and attacking the eyes and throat are used as a follow-up in a life-or-death struggle during hand-to-hand combat. Restraint, disarmament and control are more suitable for street use.

Your FREE e-book for essential knife skills is here!
Knife-Fighting Techniques: 9 Essential Drills to Deploy Tactical Folders for Self-Defense Moves Under Any Conditions

What Tools Does a Defender Have to Augment the Efficacy of His Self-Defense Move Against Knife-Fighting Techniques?

The unarmed soldier must take advantage of his ingenuity and immediate availability from man-made and natural weapons: using his helmet as a shield or using his web gear or pistol belt as a whip. He also could use his jacket or shirt as arm padding to be utilized for deflecting a slashing attack; to be whipped in at the enemy like a bullwhip or chain in figure eights aiming to wrap around the attacker's weapon arm; to possibly dislodge the weapon; or to give availability to restraint, disarmament and control.

momentary shock and delay necessary for evasion or counterattack from the unarmed defender.

What Are the Best Self-Defense Moves Against Knife-Fighting Techniques?

Your primary concern is evasion followed by a fast and powerful counterattack. Training should be conducted at four basic speeds: one-quarter, half, three-quarter and full speeds so as to allow for psychological/physical orientation of the movements.