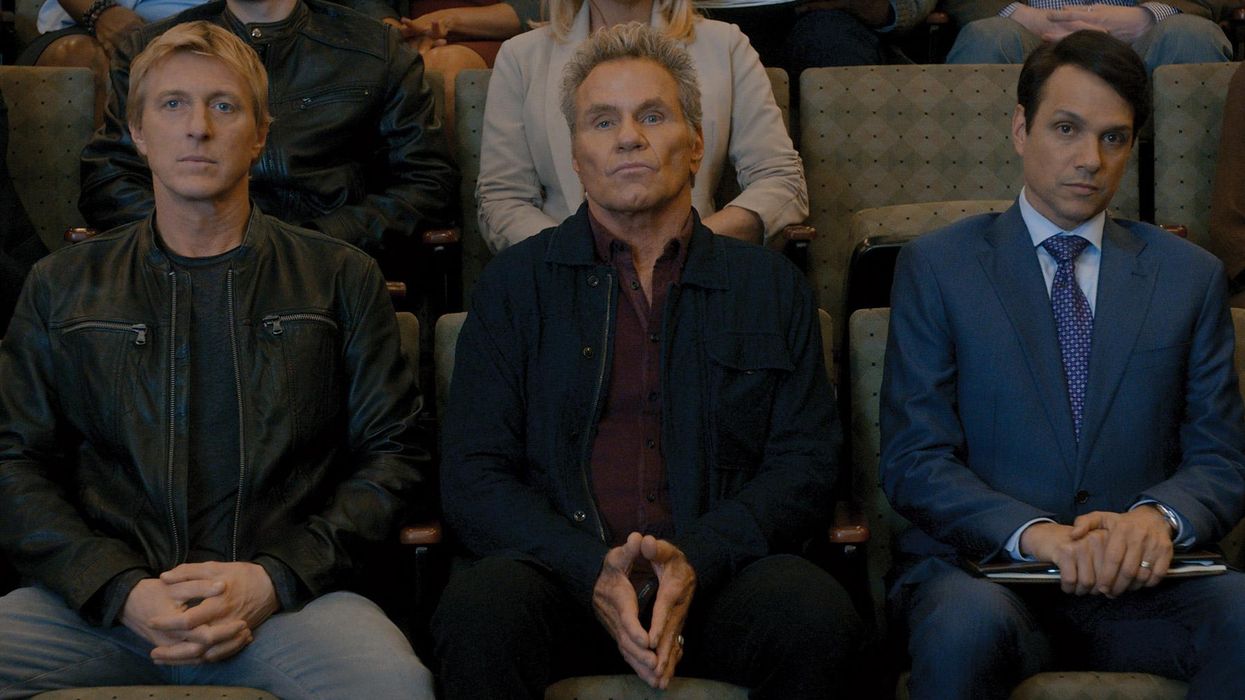 Get Within Striking Distance of Ralph Macchio, William Zabka and Martin Kove!

The third season of the martial arts mega-hit Cobra Kai debuted just days after this issue of Black Belt went on sale. If the past two seasons, which are currently streaming on Netflix, are any indication, the new season once again will show no mercy to the competition and crane-kick all challengers in the teeth. After all, Cobra Kai was one of Netflix's top series in 2020, which means it's guaranteed to garner a legion of viewers starving for martial arts action.

Anticipating the demands of die-hard fans of Cobra Kai and The Karate Kid, we've assembled this cover story featuring Ralph Macchio, William Zabka and, of course, Martin Kove. Find out from the mouths of the stars themselves what has gone into the making of a modern martial arts classic.

From Student to Master

Black Belt: Outside of preparation for the Karate Kid movies and the Cobra Kai series, have you trained in the martial arts?Ralph Macchio: I did take some jujitsu lessons when I was around 10 years old. However, my true intro to martial arts came when I started on the original film during preproduction in 1983. Since then, I have often incorporated some elements of martial arts into my workouts.

Black Belt: Was there a specific training routine you adopted to prepare for the new season of Cobra Kai?
Ralph Macchio: For Season 3, I dove a little deeper into preparation training and conditioning as I had more fight sequences than in the prior two seasons.

Black Belt: Do you engage in any additional activities to supplement what you do for the show?
Ralph Macchio: Absolutely. I have done a lot of stretching, cardio and light weight training for conditioning and maintenance.

Black Belt: Season 3 will be released in January. Will you continue to portray Daniel as long as there's an audience, or is there a finite number of seasons that you'll do?
Ralph Macchio: We all feel the same. As long as the show is resonating and [the] stories feel organic with character growth arcing, we will aim to keep it going. We love making this show.

Black Belt: Like other small businesses, martial arts schools were hit hard by COVID-19. Do you think Cobra Kai will help get students back into the schools when it's safe?
Ralph Macchio: I think there will be an uptick in interest to study martial arts once schools begin to open. I think the series will absolutely be a shot in the arm of that industry with such a high viewership of all ages. The Karate Kid universe will continue to be relevant and drive that up even higher.

Black Belt: Will there be as much martial arts action in Season 3 as we've come to expect from Cobra Kai?

Black Belt: Daniel has become the patron saint of bullied kids everywhere. Has that made you feel obligated to be a representative for making positive choices and choosing martial arts to deal with such situations?
Ralph Macchio: I have always embraced the responsibility of paying it forward and carrying out the "fighting always last answer to problem" Miyagi-ism. Finding balance is also an element I take to heart in my own life. The empowerment you gain from the physical discipline of martial arts is something I enjoy and think is beneficial, as well.

Black Belt: Now that Brazilian jiu-jitsu and MMA are so prominent, do you think Daniel would have embraced those styles in real life? Or would he still choose Mr. Miyagi's old-school karate?
Ralph Macchio: I have always loved the philosophy associated with the goju-ryu style, so that is where my loyalties lie.

Black Belt: For you, what has been the hardest move to pull off — in either the movies or the series?
Ralph Macchio: I had a fake outside-inside tornado kick that I worked hard on for a sequence in Season 3. Tough on the groin! Everything is harder in your 50s.

Black Belt: What has been the most satisfying moment for you while making Cobra Kai?
Ralph Macchio: Too many to choose. To name a few, reconnecting with William [Zabka] and Marty [Kove] and breathing more life into these legacy Karate Kid characters, the pride I have in our young next-generation cast and keeping Miyagi's spirit alive through the show.

In the Karate Kid movies, William Zabka portrayed bad guy Johnny Lawrence. In Cobra Kai, he adds depth to the character, who's struggling to adjust to the 21st century after decades of being the archetypal bully.

Black Belt: Do you still practice tang soo do?
William Zabka: After The Karate Kid, I continued to train in tang soo do for a number of years on and off. I've tested to my second green belt so far. It's great to be back at it.

Black Belt: I've read conflicting things about the styles of karate used on-screen for the Cobra Kai system and for Miyagi-do. Are they tang soo do and goju-ryu, respectively?
William Zabka: I believe so, and on the show, we build on those styles [with] a variety of creative ideas and disciplines. Audiences are used to more flashy martial arts these days, so we have fun and mix it up, but the roots remain the same.

Black Belt: Do you keep in touch with Pat Johnson, the martial artist who trained you for the Karate Kid films?
William Zabka: Not as often as I'd like to, but I know he's there if I need him and vice versa. He's like a father figure to me — I've learned so much from him. I saw him last at the Martial Arts SuperShow in Las Vegas in 2018 when Martin Kove and I presented the Lifetime Achievement Award to master Fumio Demura.

For the rest of the exclusive interview with William Zabka and more, purchase the February/March 2021 Issue of Black Belt Magazine!

$7.99
Buy Now
From Your Site Articles
Related Articles Around the Web