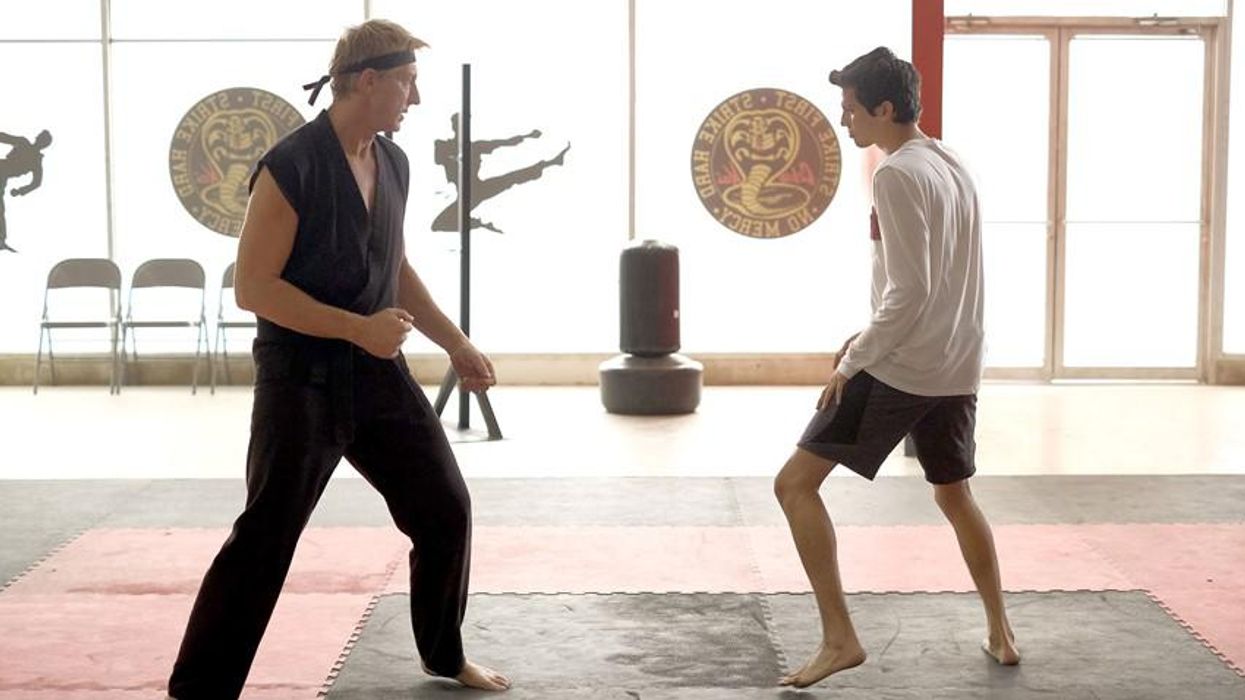 In early March 2021, I wrote a piece that focused on Cobra Kai's (CK) martial arts foundations, then for each season, I summarized the amount of time dedicated to fight scenes. These are the rounded-up minutes of fights per season: Season 1, from five episodes, cumulatively six minutes; S2, 24 minutes from seven episodes and a 77-second oner; and S3, 26 minutes from six episodes and a 112-second oner. It's time to discuss the all-important fight and camera choreography and examine their landmark oners.

Summer 1998, I'm on the set of CBS's Martial Law, starring the portly Hong Kong legend Sammo Hung. Later in the searing hot day, the Hong Kong action crew begins shooting a fight and off to one side I see a lithe lad putting on a fat costume, it was Hung's stunt double, Hiro Koda, at that time, a long-time stuntman on Power Rangers.

I became a fight directing apprentice with Hung's Chinese opera brother, Yuen Tak, and got to know all the stunt folks. As I'm watching CK's S1, it was easy to see how Koda was perfect to be CK's stunt coordinator. He had tons of experience working with teenage talent on Power Rangers and Martial Law showed how to get away with anything in a fight scene, even if the star was completely different from the stunt double and do it without a helmet. It's called snake oiling, selling something that's not real yet its cinema potency appears as effective as the real thing. I learned similar lessons as an actor/stuntman in 1979 Taiwan, first in the film Flying Tigers and the [12] Kung Fu Kids and doubling for a Chinese actress on a kung fu TV show. It's serendipitous that Koda's stunt coordinating wife Jahnel Curfman could add a female sensibility to CK's combat.

The opening fight scene of S1, Episode 1 (E1) shows Johnny (William Zabka) protecting Miguel (Xolo Maridueña), slowly yet smoothly, taking out four bratty high school thugs as he flows from one teen to the other in a way we hadn't seen in the Karate Kid films. It's a good tone setter because it promptly distanced the action away from the those films.

After four episodes of Cobra Kai training under Johnny, in E5, the season's second fight, Miguel avenges his honor by taking out the brat Johnny previously beat up. Perhaps due to the unfamiliarity of doing fights and Miquel/Maridueña skill sets were limited, camera movement and fight coverage increased to hide over emphasized and contrived fight moves as the timing and rhythm of the fights hadn't clicked as evident by Miguel not extending certain kicks.

S1, E10 has 41% of S1's six minutes of fights that feature 11 fights from the Valley Tournament. Some sequences were short with only a few techniques per shot and they worked well and showed how the actors had improved over the season. Yet as their fights scenes got longer and different camera angles were introduced, an un-assuredness in their movements crept in. The weakness was most apparent during wide angle side shots when the camera moved parallel with the fighters. The misses were awkwardly noticeable.

The most momentous snake oil movement was at the end of E10 when Sam (via Mary Mouser's stunt double) did a nifty flash kick/tricking movement when she was alone in the dojo. Based on what Sam had shown during training sequences it was too advanced for her character and Mouser's finishing straight-armed punch pose was fragile.

Okinawan goju ryu note, created by Miyagi Chojun in 1929, during reverse punches the fists are tightly held chest high, not down by the hips and the arms never fully extend during the punches (always slightly bent), that way no one ruins their elbow joints.

In Chinese films, especially with non-martial art actresses, some of whom were dancers, they'd daily practice martial stances and poses then learn to do them at a moment's notice and adding them into a spinning-away-from-camera-and-freezing pose shot.

Maridueña's fighting pose was a perfect example how a simple pose added tension to his tournament fights. They're easy to learn and can be effective for all occasions especially during weapon duels. More on weapons in Part II, since S3 introduce weapon's combat.

Yet CK's overall fan base was cool with the action not only due to all of the nostalgia, but also because it was obvious that each main actor put time into their training, and it takes time to get use to fighting on camera. S1 was an encouraging start to the show. As most of you know they all rocked in doing S2 and S3 oners. In Part II, I'll also share known and perhaps unknown insider skills and how to spot oner cheats.