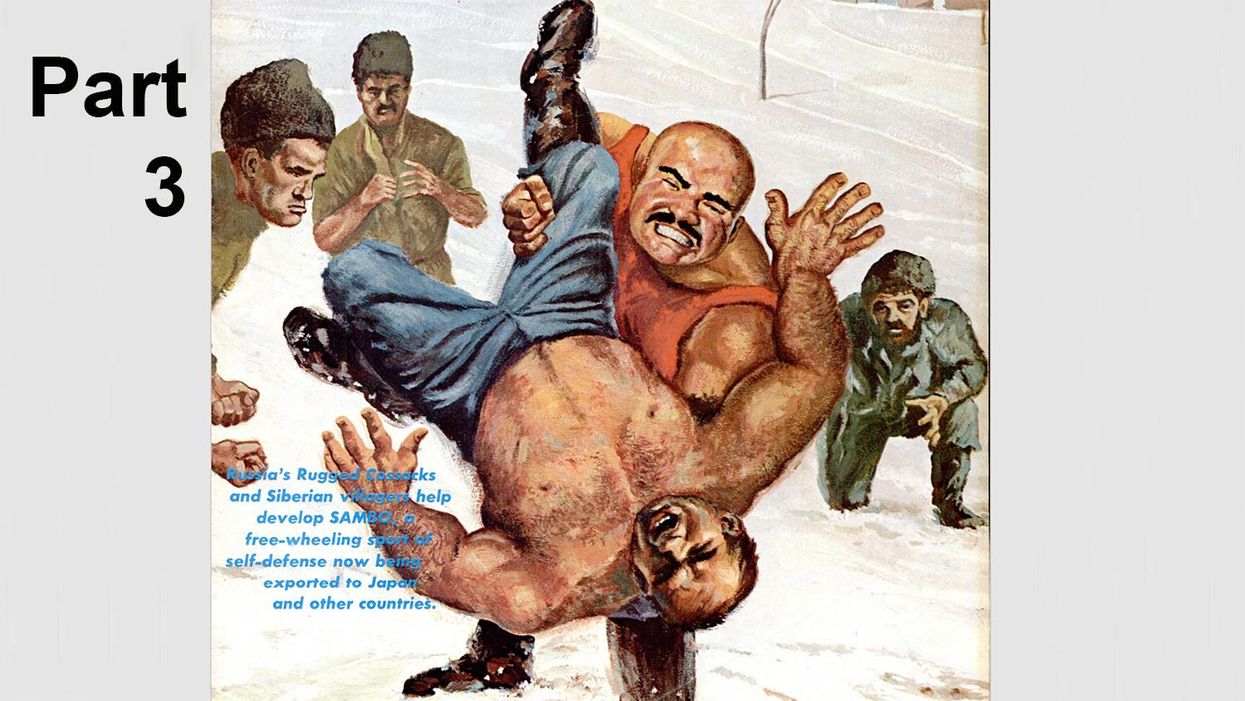 In the conclusion of this story, the author discusses the rules of sambo competition, as well as the unique uniform practitioners wear and how it facilitates the use of certain techniques in matches.

Despite the aforementioned similarities between sambo and judo, there are plenty of dissimilarities. For one thing, the sambo jacket is shorter and worn tighter than its judo counterpart, and it has special loops to hold the belt in place. And the belts, which come in green and red, aren't used as a sign of rank but merely to distinguish one opponent from another.

From the waist down, the clothing is largely influenced by Greco-Roman and freestyle wrestling. Instead of trousers, trunks are worn, as are shoes like those used in amateur wrestling.

One amusing incident reveals that there's still an interchange of ideas between sambo and judo. Japanese sambo men had been wearing their traditional judo gi while practicing the Russian sport. However, they decided that the Russian-style jacket, with its belt loops, was “more rational" because it held the belt in place and made continuous adjustments unnecessary.

They ordered several dozen jackets from the Soviet Union. Much to their surprise, the jackets they received weren't equipped with belt loops. It seems the Soviets had concluded that the Japanese jacket without loops was simpler and “more rational" than their own and had started making them that way.

There are other differences between the sports. The sambo grips are more varied than the usual sleeve and collar grips of judo. As in sumo, the belt is a favorite hold for sambo stylists, while that's not permitted in judo. Typical grips in sambo include those on the back of the jacket, the front or back of the belt, and the traditional sleeve and collar.

Reverse joint-pressure holds form a vital part of the sambo mat repertoire. The ankle, knee, wrist and elbow are the usual objects of attack, while the neck and fingers are ruled out. Ankle or wrist twisting is also disallowed because it's too dangerous.

Pressure holds are applied to intensify pain and force one person to submit by crying out yetsugi or by tapping the mat or the back of his opponent. When this occurs, the aggressor is declared the winner.

Sambo has 60 basic techniques, including those for hand, leg and hip throws. Most of the hand-lift throws originated in wrestling rather than judo. This is borne out by some comparisons.

For instance, Michiaki notes that for the past 30 years, tripping has played a decisive role in 70 percent of judo bouts. But in sambo, wearing wrestling shoes prevents the excessive use of the feet. Thus, many judo-style foot sweeps and trips can't be used. That forces sambo stylists to go more with hand techniques.

The equivalent of ippon is awarded for a clean throw. Single points and half points are given for less-than-perfect throws.

There are three ways to win a match: by ippon, by forcing an opponent to give up because of a painful reverse joint-pressure hold and by collecting a specified number of points. If the first sambo practitioner gets three points without his opponent registering any, the match is stopped and the former is declared the winner.

If, however, the opponent wins even a half point before the first player amasses three points, the latter must win by at least four points for the referee to halt the bout. That is, if the opponent has a half point, the first competitor must get 4-1/2 points before the referee will declare the winner. Otherwise, the two rivals continue to the end of the time limit and the person with the most points wins.

There must always be a winner in sambo. There are no draws or overtime periods. If the two competitors are tied, the winner is decided on the basis of aggressiveness.

A point instead of ippon is given for throws when the aggressor loses his balance afterward or when the throw is otherwise imperfect. A point is also awarded for pinning an opponent for the required 20 seconds, but only one point can be given for pinning in any match.

Warnings are dispensed for violations, and three warnings mean the match has been lost. A sambo player can receive warnings for running away from his opponent, for committing a foul throw, or for executing an illegal throw or hold.

No choking is allowed, nor is throwing an opponent onto his head.

Matches are limited to six to seven minutes for youngsters and eight to 10 minutes for adults. Preliminary bouts are usually set at eight minutes and final matches at 10 minutes.

More than 300,000 sambo practitioners live in the Soviet Union today, compared to less than 100,000 judoka, and the Russian sport is growing fast. Sambo is taught in school sports programs from the primary grades up, and both boys and girls can receive training. It's also been incorporated into the country's physical-education program, and many sambo clubs are scattered throughout the republics. The future of sambo, both in the Soviet Union and around the world, looks bright.