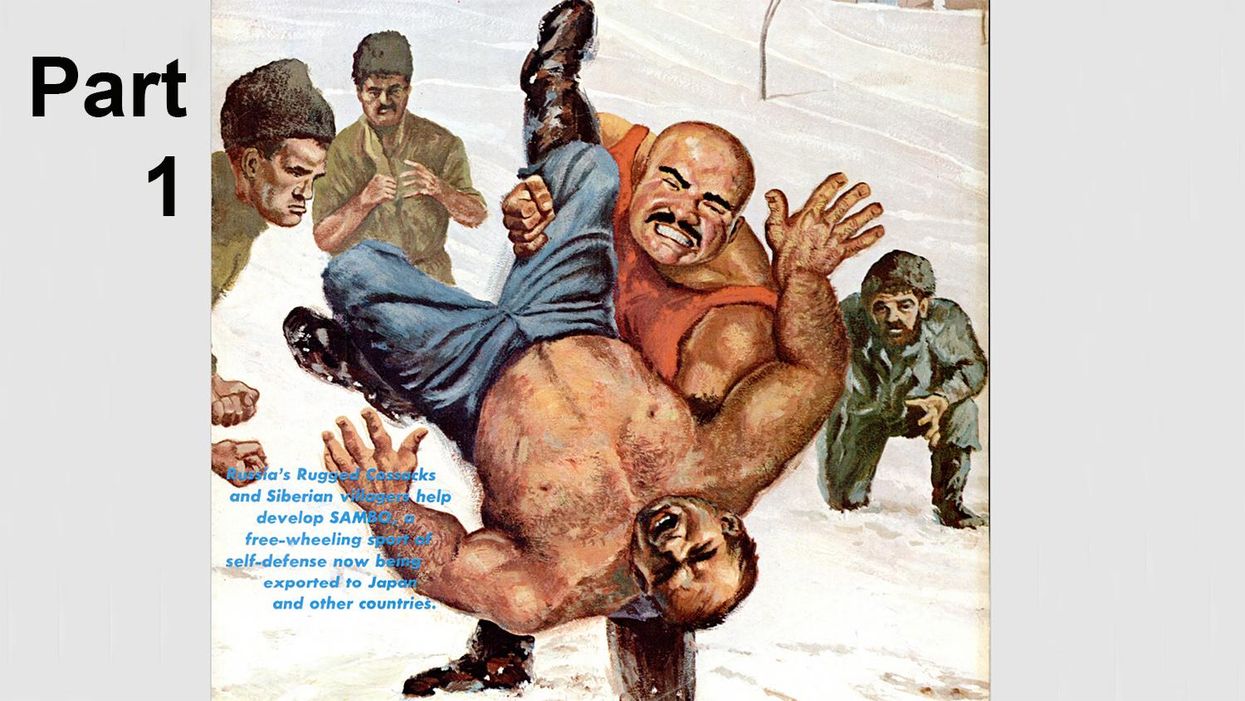 Written by Andy Adams, Black Belt's Japan correspondent, this article was one of the first to introduce the Russian grappling art to Americans. Learn about its origins — and find out what happened when a team of Russian sambo stylists battled a bunch of Japanese judoka!

In Russia, the name of the game is wrestling. It ranks as the national sport. Soccer, as in the rest of Europe, is also a favorite with the locals, but it's confined to the big cities. For sheer numbers of participants, no physical pursuit in Russia comes close to wrestling. From European Russia on the west through Oriental Russia on the south, then eastward across thousands of Siberian miles, in small villages and big towns, wrestling is the true king of sports.

With this emphasis on the grappling art, it's easy to understand why the Soviet Union is the greatest wrestling country in the world. Some nations specialize in certain forms of wrestling in which they excel, like Japan with judo, but no one country has mastered all the various major styles of wrestling and produced champions in them as the Russians have.

With the Russians so expert in everyone else's form of wrestling, it's surprising that they didn't develop their own style long ago. That observation occurred some 30 years ago to Anatoly A. Harlampief, a prominent wrestler of the time who's still active in Moscow sports circles. He decided to do something about it.

Harlampief came up with an art called sambo, a rugged, fast-moving style of wrestling that employs some of the most freewheeling throws ever seen on or off the mat. He also produced something of a controversy for such a short-lived sport.

Sambo appears to be a grab-bag collection of wrestling styles, influenced partly by judo, partly by Greco-Roman and freestyle wrestling and partly by something else. That something else is the Russian contribution, made of techniques picked up from amateur wrestling arts practiced in various parts of the nation.

The development of sambo hasn't finished. The Russians are still experimenting, tinkering with its techniques, and there are frequent rule changes. Even so, a number of wrestlers believe that sambo's techniques as a whole make for a more rational system of grappling than judo, at least from the Western point of view.

And Russia's sambo men have shown themselves to be great competitors on mats around the world. Coming out of the sambo tradition, they've displayed flexibility in moving between various wrestling styles. For instance, Oleg Stepanov, a national sambo champion in Russia, is also one of the world's leading judo men, having won a bronze medal at the Tokyo Olympics in 1964. The same can be said for a dozen other Soviet wrestlers.

Since its beginning in the mid-1930s, sambo has experienced a meteoric rise in the Soviet Union. Officially accepted by the National Sports Committee in 1938 as an authentic form of Russian wrestling, it's grown to the point at which the Soviets are beginning to export the art. It's already established in Communist Bloc countries in Eastern Europe, especially in Bulgaria and Romania. As part of the drive to internationalize the sport, the Soviet Union has set up the World Sambo Federation.

The non-Communist world got its first close-up look at the sport last summer when a team of Russian sambo men invaded Japan for a series of good-will matches. The Japanese showed an interest in sambo, and in 1965 they set up the Japanese Sambo Federation. The number of Japanese practitioners is small — perhaps only 100 or so — but they're enthusiastic. Most are former judo men, with some holding high rank.

However, the results of last summer's matches with the burly Russians showed that Japanese sambo enthusiasts still have a long way to go before they attain the excellence their fellow countrymen have shown in judo. The Russian sambo players crushed the Japanese, winning 14 of 16 matches.

The results stand in contrast with a series of matches held three years earlier in Japan. At that time, a group of Russian sambo stylists came to Japan to compete against a group of judo players in judo matches. After a week of intensive study at the Kodokan, the Russians were turned loose against the Japanese, most of whom were either third- or fourth-degree black belts. Showing their flexibility for competing in other styles, several of the Russians proceeded to stack up the opposition.

The Russian sambo men fought the Japanese to a standoff. It wasn't until the final night and final match that the Japanese were able to eke out an 8-7 win over the visitors. During the tour, Genrikh Shults, a schoolteacher and six-time national sambo champ of Russia, defeated three of his opponents and tied a fourth. Crowed the exultant Shults when it was over, “I could have won every match by a fall if I had been in Japan a little longer."

The shocked Japanese were quick to offer reasons for the showing. “The Japanese were not the best, and they were competing in exhibitions, not for keeps," said Koji Sone, a former world judo champion. Undoubtedly, there was some truth in that. At the same time, the Russian sambo men were certainly some of the best the country had to offer.

Nonetheless, the Russian performance made an impression on a number of Japanese, and interest in sambo picked up from that time. Last summer, nobody was underrating the sambo practitioners when they arrived on a wrestling tour. And the Russians disappointed no one.