CDT: Nonlethal Self-Defense Moves to Keep You Free From Injury and Jail (Part 1) 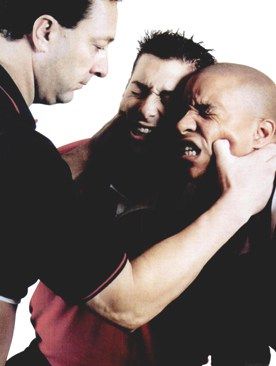 In today’s litigious society, even a punch delivered in defense can land you in the middle of a legal quagmire. Black Belt looks in-depth at a nonlethal self-defense system that can keep you free from both injury and incarceration!

It's past midnight when you leave the party. The street is dark and quiet except for the muted sounds of laughter and rock music. You don't see him as you cross the street, but the instant you reach your car, a man darts out from behind a van and grabs your arm. What do you do? While you could use any number of martial arts techniques to extricate yourself, you need to be careful because in today's litigious society, even a punch delivered in defense can land you in the middle of a legal quagmire — if not in jail. A safe bet for liability-free self-defense would be a response drawn from a system that doesn't rely on bone-crushing blows to achieve its goals yet is more than capable of dealing with a bigger, stronger attacker. One such system is Thomas J. Patire's Compliance-Direction-Takedown method, also known as CDT.

The Roots of CDT's Self-Defense Moves

Patire is no stranger to the martial arts. He has taught defensive tactics to federal agents since 1982. He holds a seventh-degree black belt in hom-do, a rare military martial art taught in the Philippines. He also has a black belt in aikido and has trained extensively in jujutsu and hwa rang do. Despite the plethora of lethal moves he has mastered, CDT follows an approach that is fundamentally opposite of the typical death-dealing mentality of the armchair warrior.

Make your instincts work for you with this FREE download!
The SPEAR System: Tony Blauer Shows You 6 Self-Defense Moves
Based on Real Street Fights

Patire based his program on research he conducted while teaching for the United States government in 1989. He discovered that in numerous cases across the country, law-enforcement officers and private citizens who defended themselves with overzealous self-defense techniques could not defend their actions in court. “The reason for this is that approximately 97 percent of all altercations are low-level force and non-deadly," he says. “The problem of many so-called self-defense systems is that we are taught to finish the person even when he is down and out. That is where the law goes against us."

Patire then realized that the people who were employed at his State of the Art Security executive-protection company also needed to learn the new defensive skills to avoid a similar legal nightmare. One wrong move could leave them out of the security profession for life and land company officials in court, he feared. With the federal government's approval, Patire and his instructors began teaching CDT techniques first to his employees and then to security specialists, law-enforcement officers, flight attendants and business executives. After tracking more than 25,000 of them for several years, he discovered that not only did his material work in real situations, but it also led to no arrests or lawsuits.

“I once believed that I would really have to hurt somebody that I viewed as harmful. I was wrong. CDT is a universal personal-protection system in that its techniques can be adapted to most situations. While I do not intend to abandon my traditional hard-core martial arts techniques and I do believe that there is a place and time for them, at least now I know I have a softer, more legal way of neutralizing or escaping from an attacker." — Kathy Long, kickboxing legend Check out these great kicking books and DVDs!

In 1992 Patire officially introduced the innovative program to several other groups, including the FBI, CIA, DEA, Federal Protective Services and military police. In 1997 he went public. “I designed CDT to keep my guys out of trouble, only to realize that over 900 police and security agencies and in excess of 1,000 martial arts schools would later get involved in learning and teaching it," he says. “It became a business within a business, which was not my intent — although like anything else, good things have a way of spreading."

Sara Fogan is the former managing editor of Black Belt. For more information about CDT, call (888) 238-7287 or visit cdt-training.com.