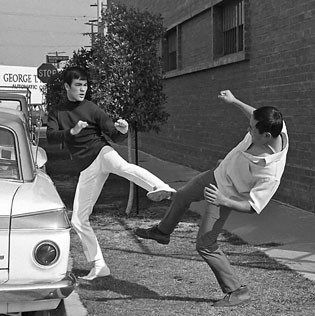 From the pages of Bruce Lee's Fighting Method: The Complete Edition, the martial arts icon is shown executing this martial arts staple in a self-defense situation on the street!

When you study violent encounters, one fact tends to stand out time and again: The prepared fighter almost always wins. But being prepared requires more than just training. Long before self-defense experts and military analysts adopted the phrase "situational awareness," Bruce Lee taught us that we must always be aware of our surroundings. Or as Lee would say, "The best surprise against a surprise attack is not to be surprised."

Delve into the genesis of the most influential book in martial arts history with this FREE download! Bruce Lee's Biography and the Birth of Tao of Jeet Kune Do

To help us develop our alertness, Lee provided us with four surprise-attacker counters in the book Bruce Lee's Fighting Method: The Complete Edition. Today, the Little Dragon will teach us how to counter an ambush with a side kick combo.

Note: You have to constantly practice the side kick on a heavy bag — preferably about 70 pounds — to develop good power. Notice that Lee delivers his kick while keeping his body away from the assailant.

Books (and e-books) such as Tao of Jeet Kune Do: Expanded Edition, Bruce Lee's Fighting Method: The Complete Edition and Chinese Gung Fu: The Philosophical Art of Self-Defense — Revised and Updated bring this icon's philosophical and physical teachings to life, while books and DVDs featuring first-generation Bruce Lee students such as Dan Inosanto, Ted Wong and Richard Bustillo — and JKD practitioners from further down the lineage such as Tim Tackett and Lamar M. Davis II — carry on the evolutionary tradition of the “way of the intercepting fist." Check out these links to dig deeper into Bruce Lee's training methods and philosophies: