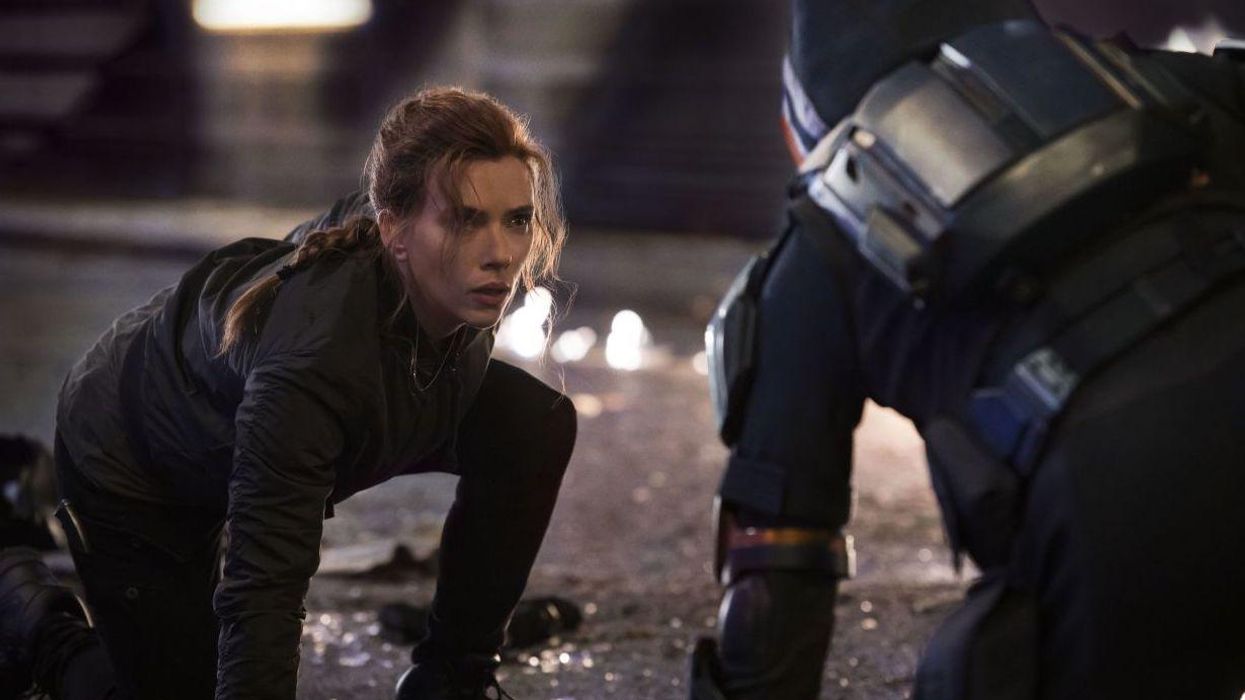 Trapped between a rock and a hard place of the Captain America: Civil War and Avengers: Infinity War events, the Cate Shorland directed Black Widow is a boulder film that doesn't emphasize Natasha Romanoff (Scarlett Johansson) being a relatable hero that lacks superpowers, in sleek leather, defeating men with repetitive similar fights. Instead, the film opens with a typical 1995 American family living in small town Ohio when out of the red, white and blue, wee Natasha and her 6-year-old sister Yelena, witness their parents' American dream crumble into an Osterman Weekend (1983) landslide of chaos.

Avoiding U.S. government ballistic mayhem and barely escaping to Cuba, we realize they are Russian intelligence agents posing as an American family that are now being cruelly separated from each other by their boss handler General Dreykov, who hijacks the children for his furtive Widow project at a high-tech gulag secret facility known as the Red Room. Black Widow is ultimately about a pseudo-family striving to become a real family, show that blood is thicker than water even in a deep river of deceit and Natasha's vendetta to paint Dreykov and his Red Room blood red dead.

As I'm watching Black Widow I recalled my undergrad days at Cornell's entomology department in 1978. During a pest management lecture the professor told us about a Cornell PhD graduate student who back in the 1950s studied the toxicological effects of a female black widow spider bite. Allowing himself to be bitten and with anti-venom nearby, he wrote and tape-recorded what was happening for eight hours…then nothing.

The female black widow has a red hourglass-shaped marking on the underside of her abdomen. In nature, the combo of red and black is conceptually known as warning coloration; keep away or doom is what you pay. The female is the most poisonous spider in the world, it's silk by weight is stronger than steel and the male partner to her is just a meal. Thus, if female black widows ran a dating site, it would really be a menu.

Beyond the coincidental Scarlett named actress playing a deadly character named after a real creature that has a scarlet red marking only on the female, there's a cute running gag in the film between Natasha and Yelena that pokes fun at Natasha's classic dropping down into a 3-point stance and slowly glaring up or frisking her hair at the enemy.

Since artist Adi Granov introduced the 3-point stance on the cover of The Invincible Iron Man #76 (1998), it has become a prominent heroic stance in the Marvel Comic Universe. Though the 3-point stance has it's origins in Japanese mecha, amanga genre created in Japan after World War II when artist Mitsuteru Yokoyama established a link between man and machine, the stance first appeared in an anime episode of Go Nagai's Mazinger Z (1972) when he unified that link by having a boy sit inside a robot and drive it. Soon thereafter, the stance showed up in Chinese kung fu and Japanese chanbara films.

When it comes to fighting characters named after living creatures, my fight choreography mind goes into biomode. In 2002, during a Sam Raimi pre-shoot press junket for Spider-man, when I asked him if he would be using any true-life spider fighting skills in the film, the audience giggled as Sam blurted, "What would that be?" I noted three specific spider behaviors used by certain spiders during prey capture and escape skills from being preyed upon. He smirked, "Now I will." Willem Dafoe was jovially amused.

Today, I'm asking myself the same question, were there any true-life black widow fighting skills in this film? When a black widow attacks its prey, in a quick swoop it accurately attacks over the whole body and depending on the prey size and power, she subdues it instantly. Additionally, females don't attack other females and when there's trouble like if her nest is destroyed and nowhere to hide, she'll escape by rapidly repelling down a single silk thread. These behaviors are all in the film during the action sequences.

Most of Natasha's fights are short and concise, where she often ends up all over her opponent's body, from head to toe and its instant defeat. No fancy kicks or jackknife moves, its land, wrap around, knock out or kill and move on.

Her web-fu combines dangling from a single piece of rope (silk) while abseiling down the face of a wall (Aussie rappelling) and swooping down into action on a rope attached to a helicopter and a bridge.

The fights are shot with tight camera angles using one technique per shot. Now and then, a wider angle string of two, one-and-a half-moves per shot emphasize a fight's emotional beat. Meaning, she'll block a strike and then start a punch followed by a second lower angle shot showing a smooth transition to the end of the punch and an ensuing take down. It's an effective combo that clearly impacts the intensity of the action.

Additionally, in Black Widow, when facing female opponents Natasha tries to defend herself against them rather than kill them. If it's a standard male opponent, it takes less than eight seconds to slay them. Yet there are two duals that will challenge her ethos and a single vendetta bout where she purposely breaks the 8-second death-inducing decree to the nth degree.

Speaking of eight, how did that grad student fair? At eight hours, the spider's neurotoxin paralyzed him and he was unable to speak, write or inject the anti-venom. Fortunately, an undergrad visiting the lab saw what was happening and injected the anti-venom in time. Point is, don't underestimate or mess with the power of the black widow and the Black Widow.