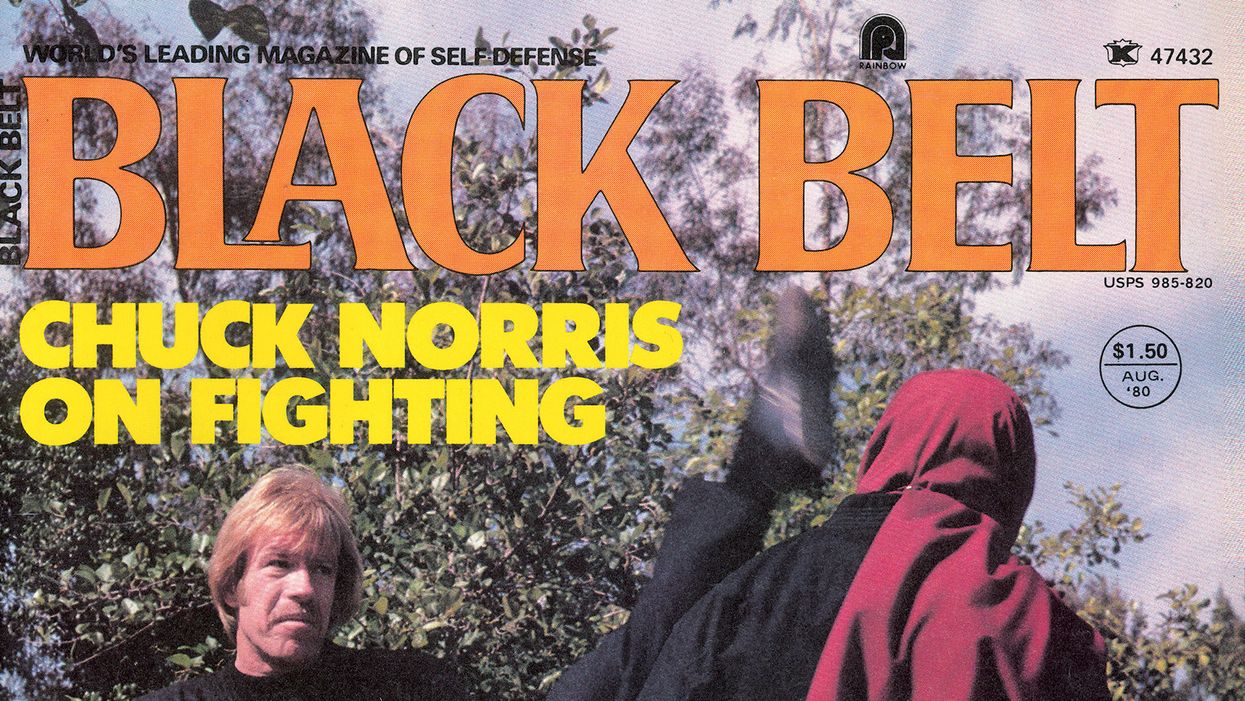 The 200th issue of Black Belt was dated August 1980. It was 76 pages long and featured 40-year-old Chuck Norris on the cover.

Chuck Norris on cross-training: "The Korean style (tang soo do) was good, but there is a lot more to learn than just that. So I started training with a Japanese stylist, and I got my hand techniques down a lot better. Then I started working a lot with the Chinese systems and learning the mobility of the Chinese systems. Plus I studied judo for five years, and so I started incorporating judo — the sweeping punch — and then I started studying aikido. I was just trying to absorb knowledge."

- Likely the most expensive item featured in an ad in this issue of Black Belt: a full-size replica of samurai armor, $2,995.

- The U.S. National Karate Team flies to France to compete in the WUKO World Championships. Chuck Merriman and Alex Sternberg are the coaches. Among the American athletes is Billy Blanks.

- "The theory of 'no first attack' had no place in jujitsu," Alan Kitay writes. "It is because of the flexibility and adaptability of all the techniques — which can be offensive or defensive — that this is so. To merely parry and defend, as would be taught in an aikido school, has one major drawback: It allows your opponent more than one shot at you."

- On the subject of con men in the martial arts, Fred Hamilton of Jamaica, New York, sounds off: "What amazes me is that the kids are an incredible barometer for seeing through phonies. Every person that a kid has warned me about has always turned out to be a lemon. As a rule, [kids] have a good sense for people."

- "The reason that this art has survived, then, is not because of its importance as a means of espionage but because it got back to the original purpose of enlightenment and personal development." So says Stephen K. Hayes on the history of ninjutsu.

- A one-year subscription to Black Belt is on sale for $10.

- In perhaps the first instance of the word "combat" being used to describe a supposedly more street-realistic interpretation of a martial art, it's noted that 35 years ago, Col. Rex Applegate referred to his style as "combat judo."

- "The people who've called me since my TV appearances almost always preface their questions by demanding that I tell them my 'secret,'" says breaking sensation Richie Barathy. "I don't have one. There's nothing I do that is the least bit different from the mental training that can be gained through adhering to the requirements of any genuine martial arts training program."

- The featured fighters in Century's new ad for Pro Pants and Sport Tops are Mike Genova, John Longstreet and Keith Vitali.§ "Everyone has a handicap," says blind judoka Jesse Pope, 25. "It's just that it doesn't always show on the outside."

- After outing a person who submitted faked photos, the editor of Black Belt reveals one way bogus breaking pix are concocted: "Pre-cut the ice, then use salt to join the block back together. The block then breaks very easily when hit." (You can guess what I'll be doing this weekend.)
(Note: Back issues are not for sale.)