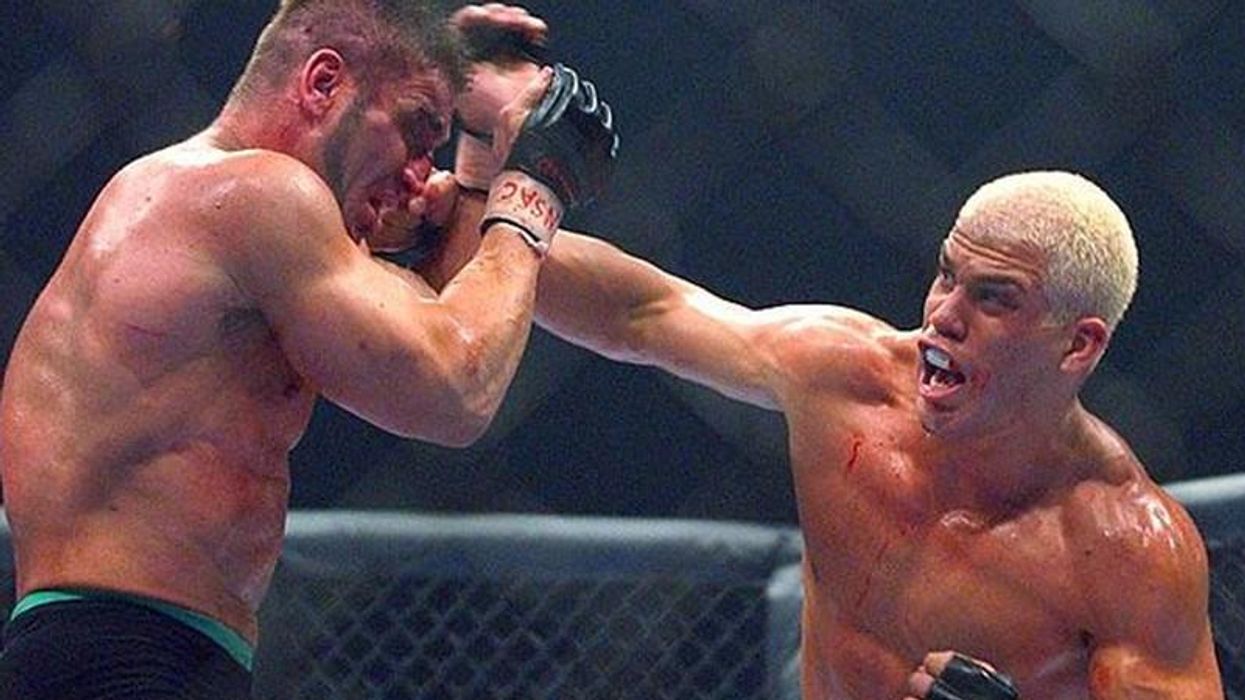 November 2003 marked the end of an era for the Ultimate Fighting Championship—and by extension, the mixed martial arts in the United States. Over the course of those 10 years, the sport saw more evolution than Darwin's notepad. And through it all, despite rumors of banishment, mortality rates, political machinations or simply the laws of attrition, the UFC has stood its ground. You don't get this far without being persistent—or dramatic. Unlike the stolid world of boxing or the over-dramatized world of professional wrestling, the UFC found its primal appeal in letting the show takes its own course. Feuds fanned their own flames, favorites rushed to the top and plummeted to the bottom, and underdogs made us believe in the impossible. Be it through world-class wrestlers or strikers, or the sheer heart of the pioneers, there is no purer evidence to be found of the warrior's heart than in the stories of the octagon. Let's open up the gates:

By the time UFC 3 rolled around, the event was a pay-per-view sensation, creating a spectacle with enough bluster to challenge pro wrestling. The height of such promotion was when 5-foot-11- inch, 215-pound Keith Hackney was paired with 6-foot-8-inch, 600-pound Emmanuel Yarbrough. Despite being nearly swallowed in Emmanuel Yarbrough's girth, Keith Hackney managed to unwind with hammer fists to the side of the sumo's head, resulting in referee intervention. The UFC may never come closer to the fabled gladiatorial spectacles of the Roman Empire. Though many self-important observers were loath to admit it, this was must-see TV.

For five installments of the UFC, it was Royce Gracie's formidable finesse that drove the fights and the stories. Enter David “Tank" Abbott, the complete antithesis of the martial artist: a street brawler with an ego as big as his belly. David “Tank" Abbott sauntered in and proceeded to decimate John Matua in seconds, sending him to the canvas with such force that the impact induced a seizure. It was an ugly moment for the UFC, but another reality check. Sometimes the graceless slugger got by on pure bad vibes. David “Tank" Abbott would go on to become the first real villain—and antihero—of the promotion.

Nearly three years old, the UFC had already begun to weed out the weekend warriors whose sensei had drilled in false hopes of athleticism. Dan Severn was the first to arrive wielding a lifetime in wrestling, but it was decade-younger collegiate star Mark Coleman who married ground control with devastating striking. His first tournament bid was a demolition ending in a weary Mark Coleman pounding out an even wearier Don Frye. Submission experts—the former front men—would now have to contend with Olympic-level conditioning and the threat of a powerhouse grappler steamrolling them into the mat.

A cakewalk? Hardly. Just listen to an inebriated Mark Coleman talk about “grounding and f—in' pounding" kickboxer Maurice Smith in the evening's main event. Mark Coleman had been an unstoppable wrestler; Maurice Smith was merely an Extreme Fighting vet who had picked up a ground game from Frank Shamrock. The outcome was never in doubt. Good thing no one told Maurice Smith, who weathered an early storm and then picked his shots against an exhausted—and aghast—Mark Coleman. Now strikers who could play a good defense were suddenly dangerous. The sport again insisted on never sitting idle.

After two tournament victories, Royce Gracie was every bit the star as the UFC itself. And again promoters sought a heavily muscled action figure for him to manipulate. Kimo Leopoldo had little formal training, but being tenacious—and heavily tattooed—earned him a slot. For seven minutes, the two nearly abandoned all pretense of sportsmanship and worked each other over. An exhausted Kimo Leopoldo tapped from an arm lock, and an exhausted Royce Gracie dropped out of the show. It was the first time the invincible Brazilian revealed a dent in his armor.

Up until this point, no quintessential mixed martial artist had sprung up—none with the ability, charisma and drive to act as a figurehead for an emerging sport. That all changed in the 15 seconds it took Frank Shamrock to armbar Olympic gold medalist Kevin Jackson. The adopted younger brother of Ken Shamrock immediately made a name for himself, the action inside the ring had come full circle for the umpteenth time and Shamrock could back up his cross-trained ways with a bravado that the crowd ate up.

With dismal compensation in relation to boxing, there was little incentive for world-class strikers to test their chin in the UFC. But there was plenty of motivation for 19-year-old Brazilian jiu-jitsu fighter Vitor Belfort to supplement his groundwork with naturally fast hands. In a four-man tournament, the muscular Brazilian smashed his way through Tra Telligman and Scott Ferrozzo like a bulldozer, offering up the most accurate punching the young sport had seen. Belfort would go on to become a star, and not a single fan watching his debut performance could claim disappointment.

The sight of a slender, gi-clad Royce Gracie ambling into the cage is now virtually iconic, thanks in large part to his three stunning tournament victories. However, it wasn't his plodding quarterfinal round with Art Jimmerson that stirred interest; it was when he proceeded to manhandle the chiseled Ken Shamrock in under two minutes in the semifinals that same night. The sight of Royce Gracie—built as unspectacularly as any of us—dismantling the Charles Atlas figure was a sensation that sent enough shockwaves to create the jiu-jitsu boom of the 1990s and push “ultimate fighting" into mainstream consciousness.

Still at a point where a UFC without Royce Gracie was unthinkable, promoters looked to his quest to regain the title as the selling point. After a tough battle with Keith Hackney, Royce Gracie entered the finals against the mammoth Dan Severn, a decorated collegiate wrestler who had used his mat skills just as Royce Gracie had used his. This time, the two played a chess game for nearly 15 minutes until Dan Severn's lack of submission awareness lulled him into a triangle choke. A deadly-dull draw with Ken Shamrock in April 1995 was Royce Gracie's literal finale, but this performance takes the cake.

As he had heard many times before, 39-year-old Randy Couture was in no position to contend with his opponent. As in the case of Vitor Belfort, Kevin Randleman and Pedro Rizzo, he would be outclassed by a combination of age, cardio and skills. MMA pundits decreed that Chuck Liddell would simply hurt Randy Couture. But did he even get a shot in? To the amazement of all, Randy Couture out-boxed and then finished off his hapless foe in three rounds, taking yet another belt to become the only multiple weight-class champion and embarrass the naysayers. In equal measure, Randy Couture would prove to be the ultimate fighter, champion and gentleman.

With the UFC back on pay-per-view television and among the most profitable sporting events in Vegas, the only thing missing was a marquee bout—something with history and opportunity for mainstream interest. That came in the form of returning favorite Ken Shamrock, who had cultivated a following from his WWF days. After light-heavyweight champ Tito Ortiz had taken on Ken Shamrock's students (Guy Mezger [twice] and Jerry Bohlander), it made perfect sense for him to face their mentor. Pummeling Ken Shamrock for three merciless rounds, Tito Ortiz led the charge of the new school against the old guard and prompted Zuffa's biggest success to date.

Still stagnating in just a handful of satellite-equipped houses, SEG nonetheless pressed on with a marquee fight that has yet to find an equal. After both men had demolished middleweight contenders in succession, champion Frank Shamrock stepped up to Tito Ortiz when slumping business could've seen both men heading for the door. For four rounds, Ken Shamrock forced the stronger athlete to wear himself down before unleashing a flurry and bringing Tito Ortiz to his knees. From the insane crowd reaction for Ken Shamrock to his defiant flip-off of nemesis John Lober, no fight has told more of a story than this one.