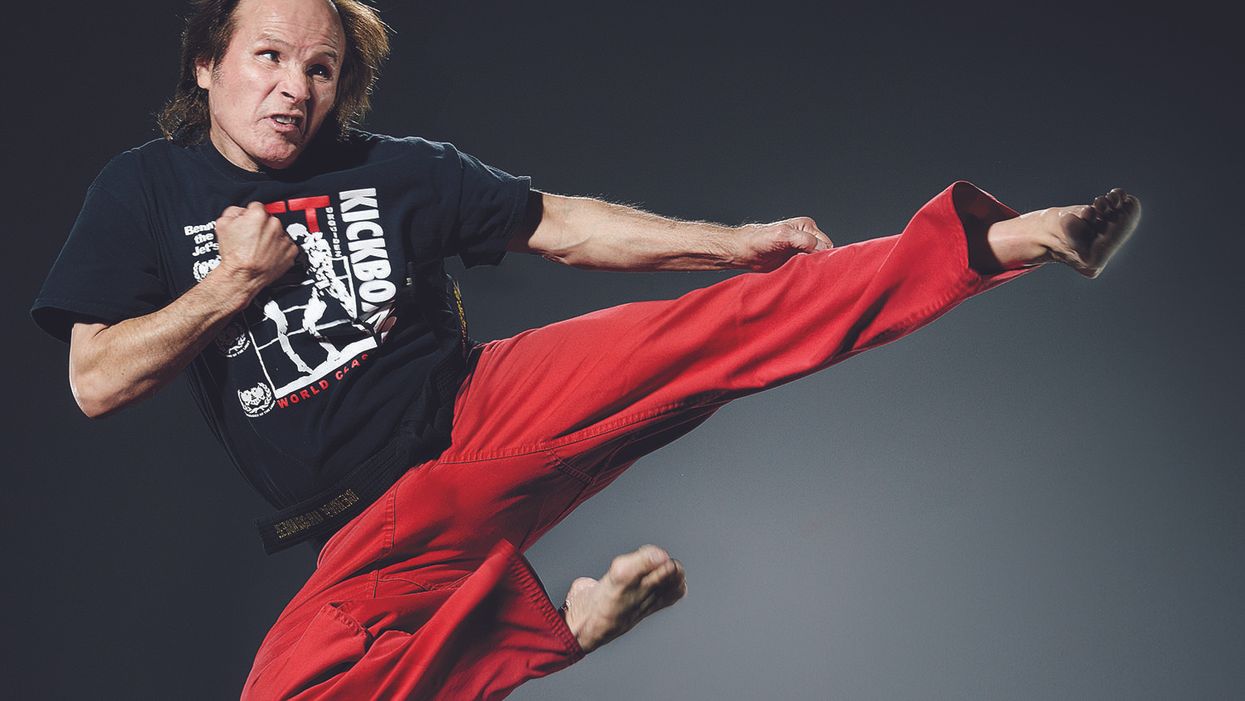 In Part 2 of this Black Belt exclusive, we focus on Benny "The Jet" Urquidez!

Benny Urquidez is often compared to the most famous martial artist of all time — Bruce Lee. One reason is Urquidez possesses the fighting qualities and attributes Lee had. Another is that, just as the "Little Dragon" was a legend in his time, so is "The Jet."

Most spectators were impressed whenever they saw Urquidez fight — not just by the fact that he always won but also by how quickly and firmly he demonstrated his superiority over his opponent. He played a "kickboxing chess game" with his opponent, often establishing psychological dominance over him — sometimes even before the opening bell.

Black Belt: What is the key to winning a fight?

Benny Urquidez: To fight for the right reason. My purpose for fighting is for sport — to perform if it's not self-defense. I never hit anybody out of bitterness, anger or hatred. I hit them for the right reason. Ten guys [may have] the same knowledge, but each responds differently under pressure. Some are great, some not. It's how you control your emotions. I don't care what you know; if you can't control it under pressure, it's not any good. If you're mad, frustrated or afraid, it doesn't work. You have to be in control of your emotions. That's the key.

Black Belt: Do you fight a striker differently from a grappler?

Benny Urquidez: Absolutely. If somebody kicks and punches at me, I redirect the movement, either clockwise or counterclockwise, [to] get away from his movement. If he comes forward, I move at a 45-degree angle; that way I'm out of his line of fire. From that point, as soon as he strikes, I parry it or deflect it. For every mistake he makes, I take advantage of it.

Usually a grappler needs to grab hold of me first. The key to [avoiding] that is to keep something in his face. Most grapplers are not used to seeing a fist come at their face, so they duck their head and reach to grab your legs. I like to go side to side so, as long as I have my hand in his face, I'm blinding him. From that point, I have my choice: jump on his back, side-kick his joints or [throw an] uppercut since he can't see what I'm doing. I can also use elbows and knees to the face.

The problem is that, when it's happening quickly, you have to be able to respond to it. If you have to think about it, it's too late. It's a matter of fear response, zero response and fine-tuning your senses.

Black Belt: Is sidestepping important when someone charges?

Benny Urquidez: Absolutely, deflecting his power and strength away from you.

Black Belt: As a martial arts legend who has been fighting for decades, what do you think of self-appointed masters who create "new" arts in their own name?

Benny Urquidez: Let me put it this way: You can only kick, punch and throw so many ways. I don't care what your belt rank is; it doesn't tell if you're good or bad. It tells how much knowledge you should have. So everyone who makes up their own [style is] trying to fool the public. But the public is too sharp now; they can only be fooled so much and for so long. When you have people making up their own style, they're trying to get money from the public. We're all here to learn; the man upstairs put us here to learn about ourselves.

Black Belt: How should a striker fight a taller and heavier opponent?

Benny Urquidez: When someone is taller than me, I get out my ax and start to chop. I chop his knees, calves and thighs. I'm a strong believer in taking out the front leg. If I do that, you can't stand on it; and if you can't stand on it, you can't punch, kick or grab me because the front leg is usually the leg needed to throw force. So I don't care if the guy is 3 feet tall, 6 feet tall or 9 feet tall. Once I have his front leg beaten up where he can't stand on it, I have the advantage. With a huge fellow like that, you can't let him grab you. Any big man automatically thinks if he's stronger, the first thing he wants to do is grab you, squeeze your head, pop it and so forth. A smaller guy taking him down or hurting him [is] his biggest fear.

Black Belt: These days a lot of martial artists practice only self-defense techniques that end a fight instantly.

Benny Urquidez: Good. It's rough anywhere you go. The stronger you are, the more knowledge you have and the more humble you become.

Black Belt: Some experts have compared fighting with a chess game. Do you play chess?

Benny Urquidez: Absolutely. I play a physical game of chess. I use it [in fighting] because I believe there are ....

Black Belt: To be proficient at fighting, how often should a martial artist train?

Black Belt: With not even one day off?

Benny Urquidez: Nope ... well, other than Sunday. Sunday is actually my, should I say, my "junk [food] day."

Black Belt: In your book, you said one day off a week was allowed.

Benny Urquidez: Yeah, so Sunday I usually spend with the family, and if my body craves sugar, I eat sugar. If I crave salt, I eat salt.

Black Belt: Where did you learn that?

Benny Urquidez: I've been blessed, very fortunate, to go around the world and work out with a lot of masters — top people at what they do. I've worked out with all types of people, so I've formulated [a list of] all the do's and don'ts — all the things you can have and all the things you should keep away from.

Black Belt: How long should a workout last?

Benny Urquidez: People can train for three hours and do nothing, and others can train for five minutes and be drenched [with sweat]. So it's not so much how long it is; it's what you put into it.

Black Belt: On the subject of speed vs. strength, would you say one is more important when facing a striker or a grappler?

Benny Urquidez: I'd rather be someone that's real quick and hit you constantly because it's not how hard you hit — it's how right you hit. Also, I can carve; I can snap at you. It's like a whip; damage is done at the end of it. That's what does the tearing, just like a jab. The end of the jab is what tears the face. So I can actually cut you up with my hand just by snapping and tearing at you. If I wanted to knock out a puncher, I would actually use my front hand to jab at his eyebrow and cut the top of it so blood ends up in his face.

Black Belt: And then he can't see.

Black Belt: Do you approach self-defense and competition differently, or are all the techniques the same?

Benny Urquidez: They're always different. When I jump into the "square jungle," whatever rules they go by [are] what I go by. But on the street, it's a matter of survival, and the fight doesn't end on the ground. It ends when he can't continue.

Black Belt: Who do you think is the best striker and the best grappler ever?

Benny Urquidez: Well, you can forget who is the best grappler — we all know that one right off the bat.

Benny Urquidez: Well, it's not a choice — that's just it. There's no choice. He stands out. He holds the aces when it comes to grappling. As far as a puncher-striker is concerned, there is a pretty good heavyweight, Stan "The Man" Longinidis, an Australian that they call "Thunder from Down Under." He's got a hell of a strike on him.

To read Part 1 of this exclusive interview — with "Judo" Gene LeBell — click here.