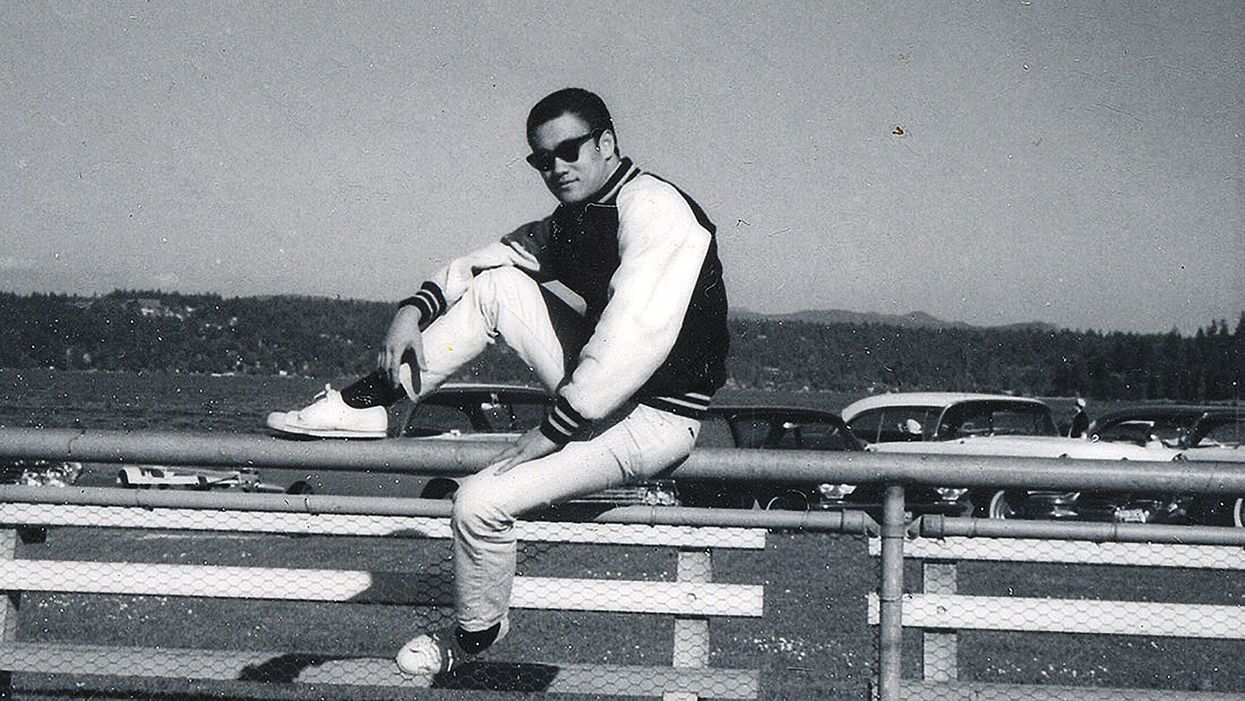 What separates Be Water from other Bruce Lee documentaries is the lack of narration. Instead, Nguyen provides insights via rarely seen videos and home movies; diary entries; letters to friends; and interviews with Lee's students, a former girlfriend, his daughter Shannon Lee, his brother Robert Lee and his widow Linda Lee Caldwell.

Be Water reinforces the notion that Bruce's existence was metaphysically and thematically shaped by water. When his parents married, his father, then called Moon Lee, changed his name to Lee Hoi-chuen. (Hoi-chuen means "sea stream.") Bruce was born during a freak hurricane-like storm that hit San Francisco. Later, as a lad who didn't know how to swim, he had a friend teach him. After the trauma of nearly drowning, he never swam again.

That's not all. Feng shui (wind water) is based on the notion that one's environs facilitate good or bad chi flow. On July 18, 1973, during a typhoon, a bad feng shui "deflector" on Bruce's Hong Kong home was blown away. Days later, he passed. Yet perhaps the most powerful instance of water having an effect on his life occurred in 1959, days before he departed for America.
Concerned about moving to the States, Bruce became progressively introspective and looked to the martial arts for answers. Despite fearing water and not having a life jacket, he found himself in the middle of a lake in a wee boat. Dipping his fingers into the water, he had an epiphany.

After rowing back to shore, where his brother was waiting, Bruce's content look forced Robert to ask what was going on. Bruce replied, "The breeze, the willows, the water — this is what martial arts is all about. You have to be like water to survive. It penetrates rock and is the strongest substance in the world."

This moment of enlightenment gave Bruce the strength to tackle anything. It inspired one of his most famous philosophical tenets — "Be water" — which he would go on to share with the world and advocate as an approach to life as well as martial arts.

Although Be Water details the racism Bruce faced in Hollywood, it also covers how early Chinese immigrants were mistreated and how, via the Chinese Exclusion Act (1882), a specific nationality was singled out. For those who don't know, the act made it illegal for Chinese workers to enter America and denied citizenship to those already living here.

Nguyen tries to associate Bruce with the 1960s civil rights movement, but the attempt fizzles. Bruce certainly was aware of it, but it's unclear whether he was involved. Nevertheless, I've been intrigued by the issue for some time. Last year, I watched Chinatown Rising, a gripping documentary directed by the Rev. Harry Chuck and his son Josh. It's based on 10 hours of footage the senior Chuck, a Chinese-American, shot in the mid-'60s civil rights movement in San Francisco's Chinatown, Lee's birthplace. After the screening, I asked Chuck the burning question: "How was Bruce Lee viewed by Chinatown back then?"

"That's a very interesting question, and no one has ever asked me that," Chuck said. "He was a hero. And today we need a hero like that."Bruce likely had a profound effect on folks in Chinatown during that period, and he is also a hero to me, to Black Belt readers and to those who don't practice the martial arts. As I've mentioned before in this column, if not for Bruce and the inspiration I derived from his life, I would have died from cystic fibrosis back in 1973. Actor and Black Belt Hall of Famer Donnie Yen also has said he sees Bruce as a hero. That's why Yen honors him in his fight scenes, which often pair Bruce's flair with Yen's lifetime of training.

Bruce advocated using the martial arts to express oneself, along with keeping what is useful and discarding what isn't, and in this zany flick, that's precisely what Yen does. He borrows the best of Bruce Lee, Sammo Hung, Jackie Chan, Jet Li, Tony Jaa, Iko Uwais — and himself! When you watch the fights, you'll recognize signature skills, scenarios and camera shots from the classics, and that's the idea.

After retiring from traditional kung fu film roles and going out on a high note with Ip Man 4 (2019), Yen has returned with a kick-in-the-groin high note. For Fat Dragon, he wears a hot-and-heavy 70-pound costume that looks like it was inspired by the one Mike Myers wore in Austin Powers: The Spy Who Shagged Me. The suit reportedly took three to four hours to don.

"I was sweating buckets," Yen said. "The more I was in that suit, I think I became slimmer and fitter as I had to exert a lot of force to fight throughout the movie."

Loosely based on Sammo Hung's Enter the Fat Dragon (1978), the 2020 film is directed by Kenji Tanigaki. The plot has Fallon (Yen) as a diet-challenged cop who goes from thin to portly when he's dumped by his girlfriend, after which he's sent to Japan on a case. There, he ends up battling yakuza members who are harassing a female sushi bar owner who's helped by the corpulent Thor. (Hung was on tap to play Thor, but it didn't work out.)The nature of Yen's fat-suit rendition of Hung's scenes is bizarre. When I was a fight-directing apprentice with the Hong Kong action crew on Hung's CBS series Martial Law (1998-2000), I keenly observed how he moved during combat. Yen's postures, flips, kicks, spins, rolls and punches mirror the Sammo Hung of that time. In part, it's the result of the costume adding size and weight to Yen's frame, but it's also a testament to Yen's skills

The opening scene has a speeding van trapped between two vans while it's being chased by motorcycles. (That might ring a Raid 2 bell.) A skinny Fallon is trying to rescue a fellow cop and ends up inside the van, where he battles a bunch of bank robbers armed with knives and guns. The difference here is that it's shot with wide camera angles so you can see everything. The way the choreography introduces a hammer and microphone into the fray is downright ingenious — and hilarious.

All the fights — which appear to unfold on rooftops, lampposts and billboards, and which seem to rage on streets, between buildings and in the sushi joint — are staged on strategically built sets that permit the crew to pull off sight gags that scream of Jackie Chan. Unlike Chan, however, Yen fights with Ong-Bak brutality and, interestingly, without blood and death. It's rock-'em-sock-'em robots meets Hong Kong comedic filmmaking.

The finale is phenomenal — and acrophobic. Think Bruce Lee fighting Suzuki in Fist of Fury, where a nunchaku takes on a samurai sword in a Japanese dojo. Now, however, it's Yen fighting Shimakura (Joey Tee), with a nunchaku taking on a sai. The matchup is similar, but because of the Chan influence, it happens on top of Tokyo Tower with an out-of-control helicopter whirling around. Talk about taking things to new heights!

What's refreshing about Fat Dragon is that it never devolves into a series of fat jokes. In a way, the final words of the film reflect Lee's "be water" philosophy. It purports that regardless of who we are or what we look like, we all can make a difference if we see events like water: "Whatever shape you put in it, whatever shape the water will be."