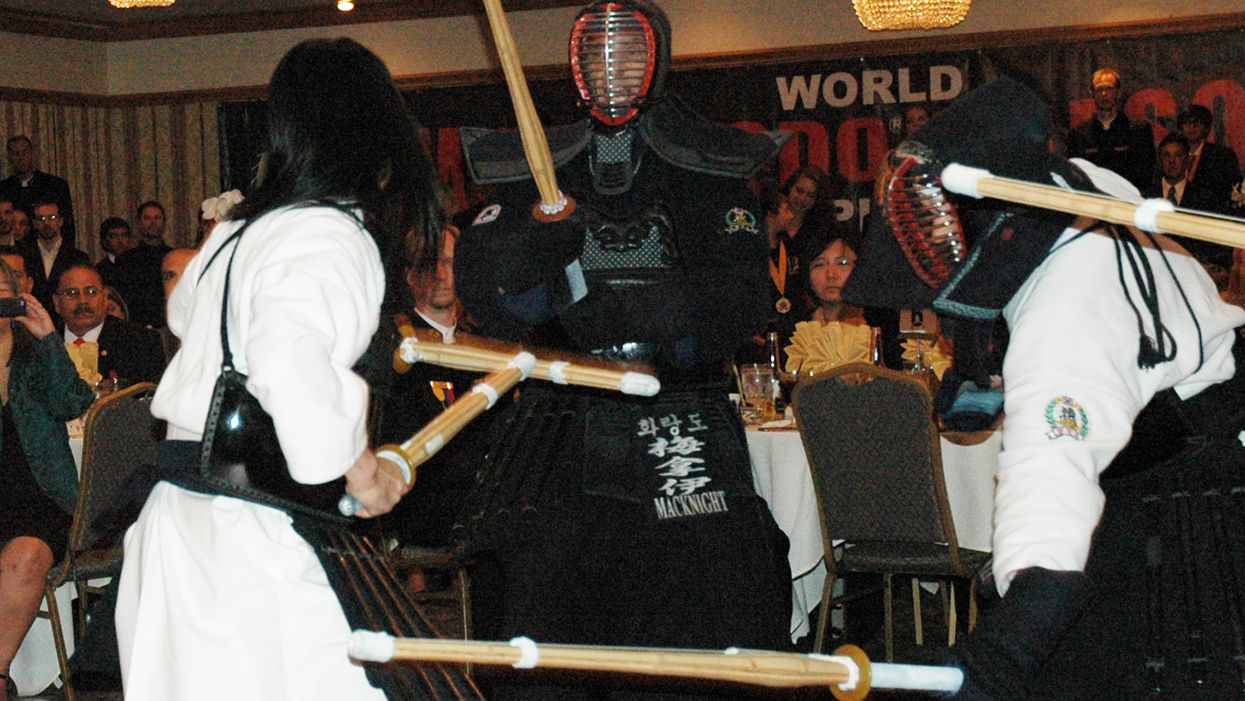 Get up close with kumdo and haedong kumdo — as well as kuk sool won — in this photo-filled conclusion to Black Belt's look at South Korea's sword arts.

Debate continues in the South Korean martial arts community regarding the exact swordsmanship skills Admiral Yi Sun-shin and his men used to fight off the Japanese in the late 16th century. Practitioners of kumdo (the Korean pronunciation of the characters used to write kendo) insist their art is the direct descendant of the one Adm. Yi Sun-shin used in battle.

Yet Korean kumdo is undeniably similar, some might argue identical, to Japanese kendo. Many kumdo instructors, including Lee Jeong-hee in Pusan, readily acknowledge that their art is a recent import from Japan taught with few or no modifications. They tell how both Korean and Japanese swordsmen train and compete under the same set of rules, then proudly announce that Korean practitioners give their Japanese counterparts a run for their money in tournaments.

The similarities of the two arts' footwork, hand movements, protective gear, real and practice weapons, and sparring rules lend credence to claims that kumdo came from kendo and not from an ancient Korean art.

Purists in South Korea counter with what seems a far-fetched theory: Japan honed kendo (or kenjutsu) into a fine art using as raw material “stolen" kumdo skills from Korea. While the explanation parallels that of Korean and Japanese sword development, it may be a byproduct of Korean nationalism.

At least one part of kumdo, however, differs significantly from kendo. It is the bon guk kum bup, or roughly “indigenous sword form." The unique routine consists of a series of movements that cannot be found in Japanese kendo. For this reason, many Koreans still believe the entire art of kumdo comes from the ancient sword ways of their ancestors and has nothing to do with Japan.

Detractors, however, insist the bon guk kum bup form is merely a modern recreation of the movements depicted in Mu Yea Do Bo Tong Ji, a Chinese book that is said to date from the 1700s. Obviously, more research needs to be done concerning the relationship between kumdo and kendo, as well as other Korean and Japanese sword arts.

It is unfortunate that few martial artists in the West know of haedong kumdo, a unique sword art that, even in its modern incarnation, exhibits a decidedly Korean character. Many South Koreans believe that it, rather than kumdo, is the art that descended from Korean sword skills of ages past.

Beginner in a haedong kumdo school in South Korea

Haedong kumdo takes its name from an ancient Chinese name for Korea: hae means “sea" and dong means “east." It probably came about because Korea lay across the water to the east, on the other side of the stretch of sea separating the peninsula from the Chinese mainland.

The first thing one notices upon entering a haedong kumdo school is the absence of the traditional Japanese decorations — such as the large drum and hanja calligraphy — that typically adorn kumdo studios. Instructors wear a regular dobok (uniform) top with dark baggy pants, and students wear ordinary black uniforms with conventional belt rankings.

Everyone wields a hardwood practice sword, which is quite similar to the Japanese bokken (called mok kum, or wooden sword, in Korean) but several inches longer than those used in kumdo and kendo. Because of the greater weight of the sword, haedong kumdo tends to use longer strikes, more circular slashing movements and more frequent body spins in forms and sparring.

Although still a minor player on the international stage, the art is popular enough to have its own organization, called naturally enough the Korea Haedong Kumdo Association. There is some evidence to suggest that the relationship between it and the Korea Kumdo Association is not very cordial, however. It probably involves a battle for government recognition and support, and regular kumdo appears to be winning for the time being. For this reason, it is unlikely that haedong kumdo will become as popular as kumdo in the near future.

In comparing these South Korean sword arts, it is interesting to mention once again bon guk kum bup. Kumdo students learn the form, but it bears little resemblance to the rest of the art's techniques. Haedong kumdo students do not learn bon guk kum bup, but the form's techniques appear similar to those of haedong kumdo. And kuk sool won students learn entirely different forms that are considered historical.

Kuk sool won is another Korean art that teaches the sword

This anomaly is sometimes explained by postulating that during Korea's Three Kingdoms Period (37 B.C. - A.D. 668), Silla, Paekche and Koguryo each possessed its own specialized sword art. Many of the techniques from this period have disappeared — except for bon guk kum bup from the Silla dynasty, haedong kumdo from the Koguryo dynasty and perhaps a few other skills. Although from different regions, the aforementioned contemporary sword arts would have shared some of these techniques and movements.

If this is true, modern martial artists are privileged to have access to the sword skills from Korea's historical dynasties. There are even rumors that “lost" sword arts still exist in remote towns and villages in the southwest part of South Korea. If and when they are located, it should prove interesting to compare their skills with those of the other Korean sword arts.

The REAL Purpose Behind Your Forms!