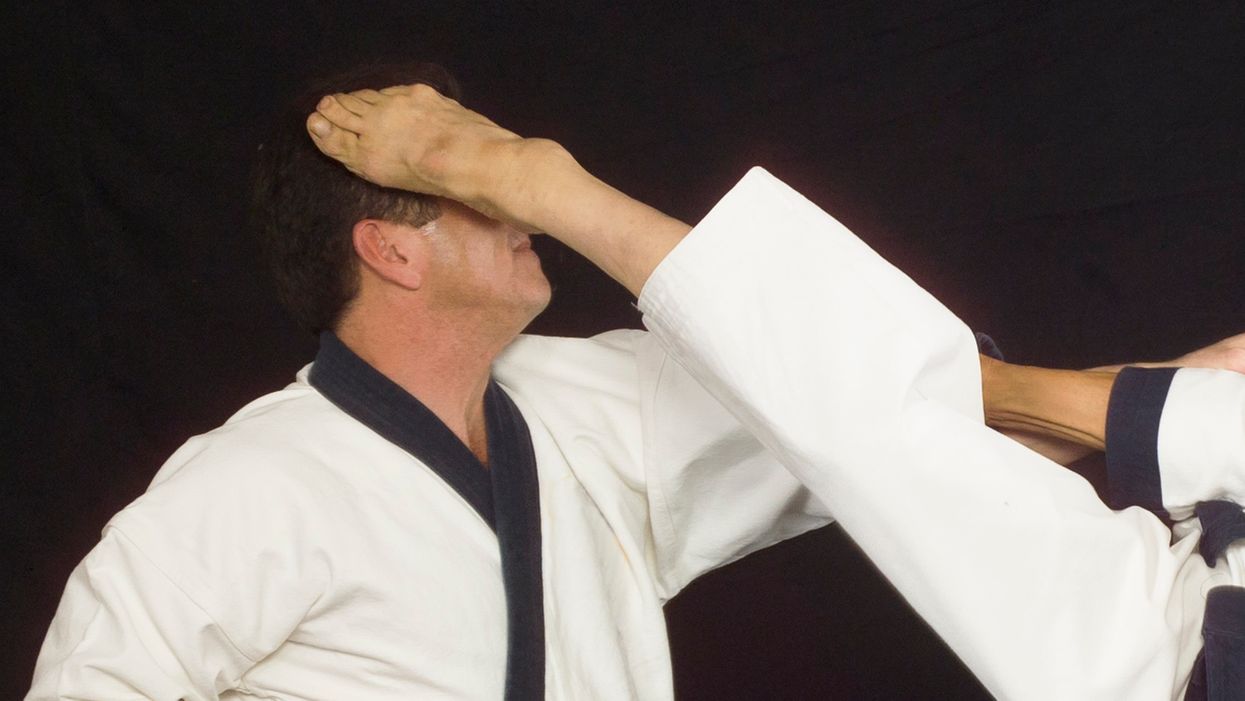 A worthwhile modification employed by some schools is that of practicing the basics in reverse. Upper blocks, reverse punches, front kicks — indeed, any basic technique normally done while advancing — can also be practiced while stepping backward.

Although a bit awkward, blocks are more likely to be used in conjunction with some type of retreat or evasive measure rather than when stepping toward an attacker. This is not a hard and fast rule; however, it is the way it often happens for real.

Likewise, kicks and punches must frequently be delivered while backpedaling from a charging foe. By training exclusively while advancing, you may have difficulty summoning stopping power if you suddenly have to launch a technique while backing up.

Aside from the practical aspect of wanting to remain effective while giving ground, occasional training in this manner forces a practitioner to become more aware of his balance and body dynamics. Instead of relying primarily on forward momentum to generate power, he learns to compensate with superior execution.

Practicing the basics while stepping backward presents a host of challenges. It is, of course, more difficult to maintain the integrity of stances. Shoulder and waist rotation is similarly hampered.

The upshot is that a practitioner must learn to break down each movement into its constituent parts. Such a realization can yield fresh insights into where one is weakest or most vulnerable during the execution of a given technique — be it a block, punch or kick.

Practicing basics in reverse is neither a new nor a revolutionary idea. Yet those who fail to experiment at least once or twice with practicing in this manner may miss out on a creative and eye-opening variation to the standard fare.

Obviously, within the vast framework of the martial arts, there are endless permutations of the basics and the ways they are passed on to students. Thus, the last factor to consider is the philosophy behind the basics — the strategy behind a given system or style.

With the basics, as with forms, there are two main schools of thought. Traditionalists believe that deep stances and powerful, committed movements develop the body mechanics needed to make blocks, punches and kicks successful. The act of retracting the non-punching hand during a classical reverse punch is a good example. Traditionalists maintain that the push/pull dynamic and the locked rear leg facilitate hip torque, making the blow stronger.

Modernists scoff at such convention, claiming that this posture is unrealistic. They insist that, as a practical matter, the free hand should be positioned to protect the head and upper body. Similarly, they believe a deep forward stance with a straightened rear leg hinders mobility.

In general, modernists favor higher, mobile stances and less-committed movements. Their rationale is that the basics should reflect the practical considerations of combat. Traditionalists are less concerned with immediate practicality (they make a distinction between training and application) than with developing the underlying attributes that will eventually make a technique effective.

Comparing these two methodologies is like comparing apples and oranges. While each has a different, perfectly legitimate objective, problems arise when people confuse the issue. If one is primarily concerned with practicality, why perform classical stances and blocks in the first place — since their effectiveness in real conflict is problematic?

Conversely, if one is practicing basic movements for their developmental and body-conditioning value, what good does it do to walk through techniques with hurried stances that are not anchored properly or with unfocused blocks or abbreviated punches?

The bottom line is that practitioners must understand what they are trying to achieve. Is a side kick intended to be a snapping movement or a thrusting movement? Is that lead-hand punch supposed to be a jab or a deep, lunging blow? Obviously, the speed, degree of commitment, recovery — indeed, the entire execution — of a technique depend on its purpose, so practitioners had better understand that purpose.

A practitioner's gender, age and physical condition, as well as the art's preferred range and fighting strategy, all determine how fundamentals are interpreted. If he finds something lacking in this interpretation, he should by all means experiment with variations‚ either in class or as part of his supplementary training.

But don't throw the baby out with the bath water in an attempt to be creative. Repetition of the basics is essential for the mastery of any legitimate martial art.

With that in mind, practitioners should realistically assess their strengths and limitations, modifying selected techniques as needed. Basics that do not fit an individual are much like an ill-fitting suit. In both cases, a few alterations will go a long way toward improving the final product.

About the author: Andrew Breen is a freelance writer, photographer and taekwondo instructor based in Somerville, Massachusetts. He has more than 20 years of martial arts experience.