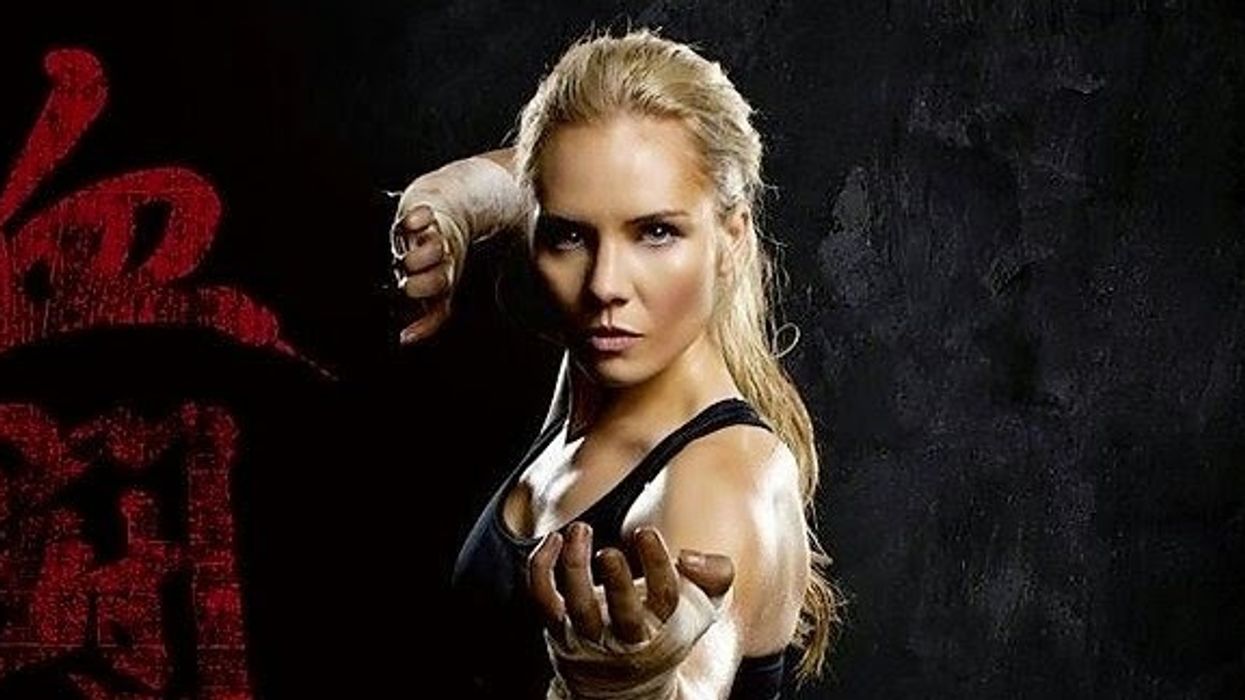 Whether she is doubling for some of the biggest stars in Hollywood, or starring in projects of her own, Amy Johnston is a cinematic force to be reckoned with.

Daughter of Kickboxing champion Dave Johnston, Amy has been working steadily as a stunt performer, supporting actress and star in many great martial arts action films. The star of the martial arts opus Lady Bloodfight was kind enough to take a few moments away from her work on the set of her current film for the following interview.

Given that you are the daughter of Kickboxing champion Dave Johnston. Was training in martial arts something you chose, or was it expected?

I don't actually remember choosing to get into Martial Arts, it was always just there and part of life for me. My dad owned a dojo and we were there so often. I was about 6 years old when I started getting more serious about it and joining the classes!

What arts have you studied?

The progressive system is what my dad taught which includes Arnis, Jiujitsu, Karate, Silat, Escrima, Kung Fu, Kickboxing, and TKD (Tae Kwan Do). Beyond training with him I have dabbled in Wushi, JKD (Jeet Kune Do) and much more.

Do you still train regularly?

Yes, training is something that is now a healthy habit for me. I feel best when I'm able to explore movement, express myself and get a good sweat in. My regimen changes depending on what I'm working on and how much time I have but I'm always getting some movement in and learning something new!

Do you incorporate any other workouts or programs into your training?

Yes absolutely! I get bored quite easily so I'm always trying to mix it up. I love weightlifting, jump rope and most cardio, hiking, rock climbing, swimming, dancing and really anything I can get into!

You have an impressive list of credits as a stunt performer, (Deadpool, Tomb Raider, Captain America, Suicide Squad, and many more). What made you want to begin doing stunts?

I truly enjoy action and the process of storytelling through motion. I grew up watching Hong Kong action cinema and soooo many action films I had to get into it!! Stunts are incredibly fun and always a new challenge!

Do you have a favorite stunt? One that you sat in the theatre, looked at the screen, and went, "yep, that's me."

I loooooved the highway scene in Captain America Winter Soldier doubling Black Widow as I fell out of a car into a door off a ramp and slid down the highway with car flying around us. Super cool scene!! Then I swing under a bridge.

Thank you! The choreography for that film was done by a wonderful stunt team helmed by Xin Xin Xiong. He was such a joy to work with and the team absolutely killed it!

Do you have a dream project that you would like to do? (Star, write or direct? All three?)

Oh boy I have way too many things I want to do and am planning on doing. I overwhelm myself but am trying to prioritize. I'm constantly pitching material and planning, writing, creating.

What is your next film? When can we see you kicking and punching again? Is there going to be a Lady Bloodfight sequel?

I would love a sequel to "Lady Bloodfight" and there was one planned but like most things in this business, they either postpone or never happen but maybe one day we will get a sequel! I have a TV pilot, I'm the lead of, that is in the works, called "Palomas Flight," which I'm excited about. I have a costar on a show that I can't talk about yet and a few films I can't chat about either, LOL ,but all good things coming your way!!

A movie called "Ava" is now out where I double Jessica Chastain as well as some videos games that have recently been released!

Thank you for taking the time to speak with me, and I know we will all be looking forward to seeing you on screen again soon!