American Fighter: Perhaps the Last of its Kind? 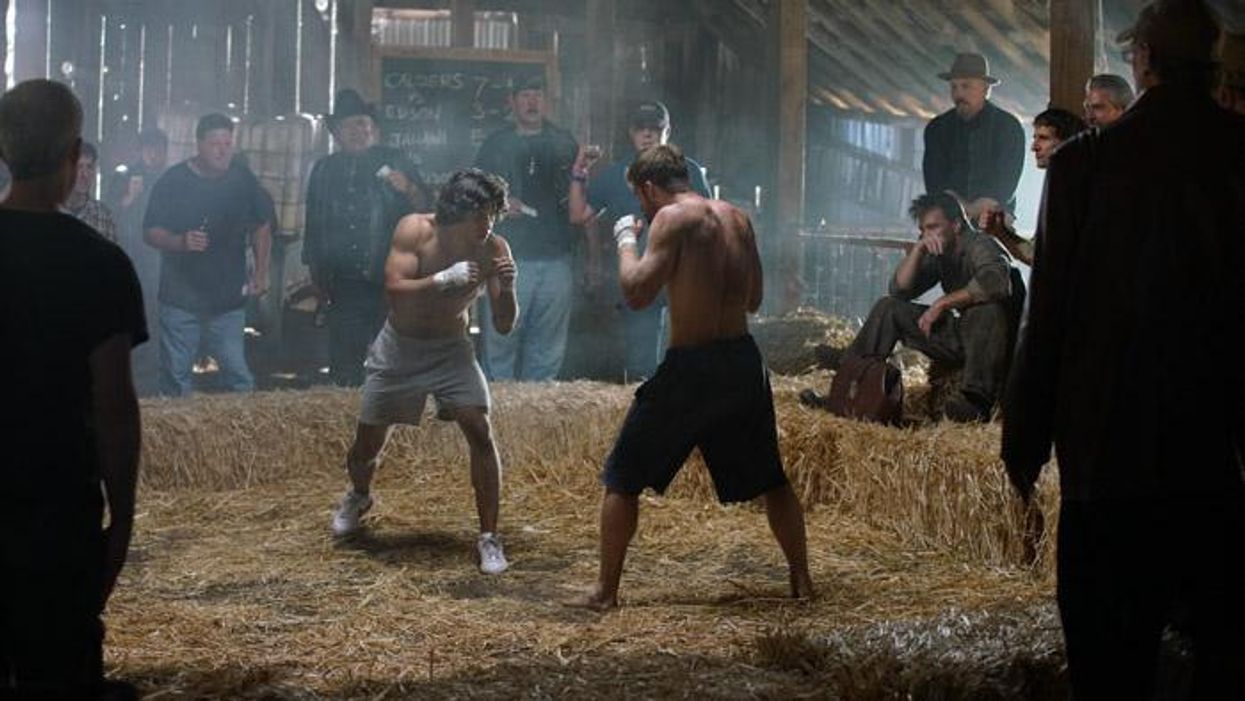 There's a weird cold chill in the MMA world that bothers me. Over the past month, several TV programs like Law & Order: SVU, where because a crime suspect was an MMA practitioner, the assumption was drawn that the suspect is dangerous and has a violent temper. Though a far cry from when masters of martial arts characters on TV were respected for following a code of ethics and fight only when it was needed, this profiling of MMA athletes is still rather odious.

Successful boxing films use a formula, a down trodden misunderstood lad overcomes hurdles by finding a mentor who changes the lad's attitude and helps him become a champion or win a rematch. MMA films need to keep having characters with a sense of humanity fighting for noble causes rather than for ego, fame and fortune. Favorably, American Fighter (2019) pursues an upright path with a Persian persuasion.

The film that put Greek American actor George Kosturos on the Hollywood radar was his role as Ali Jahani in American Wrestler: The Wizard (2016), a character based on the film's producer Ali Afshar who after fleeing the political turmoil of 1970s Iran to America, tackled high school wrestling in order to fit in and combat prejudice.

Kosturos reprises his role in American Fighter (AF), a fictionalized, MMA-influenced sequel about how college wrestler Ali quickly raises $30,000.00 in cash to pay a smuggler that can help his ailing mother in dire need of medical help, escape to America from Iran during the 1981 Iranian Revolution. As a tested wrestler with a powerful right cross, an illegal underground fighting promoter with untoward intentions courts him.

After Ali racks us his victories and purses, the promoter convinces the feeling indestructible, friend dumping and ego grasping Ali to bet his winnings on himself to defeat a deadly experienced Thai kickboxing titleholder. Mincemeat later, if Ali has the wisdom to see the light, his saving grace might come from a least expected source.

In preparation for Ali's return, Kosturos gained 20lbs and while training twice a day, six days/week for eight weeks in preparation for the new challenge of combining his already pre-learned wrestling techniques, he incorporates the standard evolved skills that MMA folks have learned mostly from five martial arts: wrestling and BJJ for grappling; BJJ for locks and joint manipulation; boxing; muay Thai for knee and elbow strikes; and muay Thai and taekwondo for kicking. Hats off and admiration to Kosturos for his hard work, martial training and commitment to the role.

Though mixed martial artists are formidable fighting athletes in and outside the Octagon, these limitations make MMA cinema fights repetitive and nothing new. To paraphrase a multitude of critics, "If you've seen one savage beat-down, you've seen 'em all."

It's probably why the various Best MMA Movies Lists of all time include non-MMA films to bolster their lists like Ong Bak, Mortal Kombat (1995), Ip Man, and impiously a film from a man that strongly opposes limitation, Bruce Lee's Enter the Dragon.

This supports the notion why MMA films are fading. I'm surprised that AF's co-star Patrick Flanery's Born a Champion (2021), which Kosturos co-produced, isn't on any list. Hollywood says don't fix it if it ain't broke, I say fix things before they break. This could start by creating a new genre, Mixed Movie Martial arts (MMMA or 3MA).

What I like about AF beyond Kosturos' honor-to-the-genre praiseworthy performance is the audacity to take a real character with wrestling experience and expand his universe by making an imaginable and moving predictive story about what Ali could accomplish by mixing BJJ, kicks and boxing into his wrestling repertoire. At the end of the day, it's an allegory on the growth of MMA in the United States of an American Fighter.