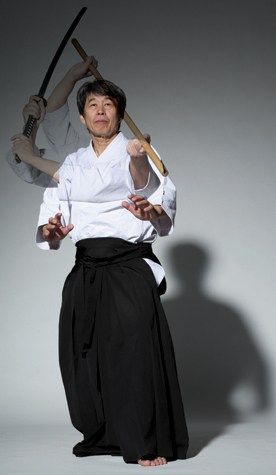 This student of Seiseki Abe and former chief instructor at Steven Seagal’s dojo will be the cover story for the June/July 2014 issue of Black Belt. Watch his elegant aikido moves in this NEW exclusive behind-the-scenes video!

The June/July 2014 issue of Black Belt magazine will feature a cover story on aikido's Haruo Matsuoka, a student of Seiseki Abe and the former chief instructor at Steven Seagal's Tenshin Dojo. In the story, titled "Synergy, Strength & Simplicity," Haruo Matsuoka is shown executing a number of empty-hand aikido moves, as well as aikido moves for defense against weapons, in a profile wherein he discusses what makes aikido applicable for everybody as a traditional design for modern living. Still photos, however, don't do his elegant yet powerful aikido moves justice. So we proudly present this bonus video of Haruo Matsuoka's aikido moves in action from that shoot — along with a breakdown of the feature stories for the June/July 2014 issue!

Learn how to use samurai swords safely with this FREE e-book!
Samurai Weapons: Sword Master James Williams Shows You How to Start Training With Japanese Samurai Swords

In martial arts movies, the harder the antagonists are to defeat, the more fun the flick, right? These six films — in which the good guys take on vampires, ghosts and other assorted monsters — are guaranteed to entertain.

A university professor analyzed the career of the greatest karate fighter of all time and came up with an intriguing interpretation of jeet kune do.

You may not have heard of angampora, but in South Asia, this ancient martial way has had a fierce reputation for centuries. Even better, it's making a comeback.

In “18 Things You Can Do Now to Become a More Effective Kicker!" a second-degree black belt gives big-picture guidance that will get your whole body in sync with your intentions.

If you're bewildered by angles of attack, take heart. Black Belt Hall of Famer Leon D. Wright wrote this beginner's guide so you can start using the concept in the dojo right away.