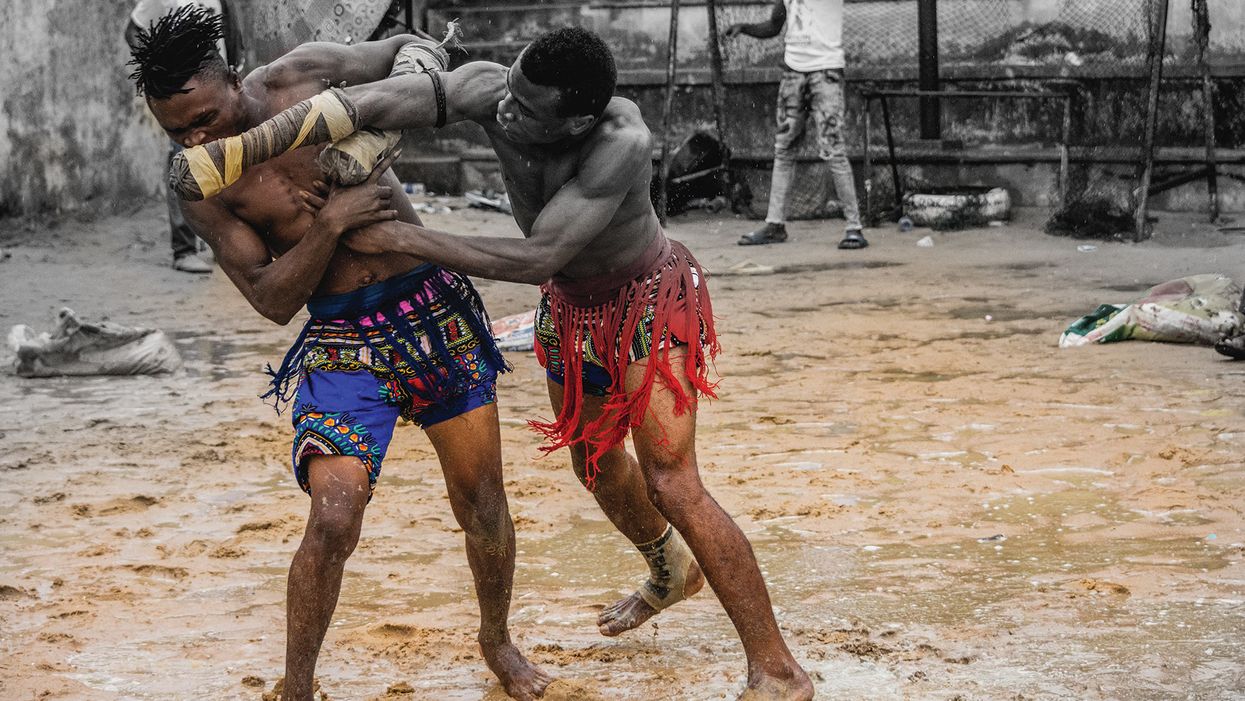 Get Ready — the African Martial ArtsAre About to Hit the World Stage!

It's well-documented that martial arts and combat sports have existed in Africa for millennia. Perhaps the most famous evidence of this facet of human history are the 4,000-year-old tomb paintings of wrestlers and other martial artists at an Egyptian site called Beni Hasan.

Although not as popular as the Asian arts, the fighting systems of Africa are still being handed down from generation to generation. Outside Africa and select parts of the world where Africans have settled en masse, few Western martial artists are even aware of their existence.

That, however, is beginning to change.Enter Maxwell Kalu. Born in the United Kingdom to Nigerian parents, this dual citizen works as a public-relations executive in London. Unbeknownst to his associates, however, he's trained in kickboxing and is intimately familiar with the indigenous style of wrestling that's practiced in Nigeria.

Building on that base, Kalu created the African Warriors Fighting Championship. The organization held its debut competition in Nigeria in 2019, and if Kalu has his way, it soon will bring the African martial arts and combat sports to the rest of the world.

How the AWFC came about is a story unto itself. "It was all a bit by chance in that I was increasingly going back to Nigeria, working with Nigerian clients [in my public-relations job]," Kalu said. "I knew that something was going to happen. I was going to do something.

"He felt compelled to act because he's a longtime follower of the fight sports, and recently he's witnessed the international success of many Nigerian athletes, including several who compete in MMA. "It's such an exciting time for combat sports and particularly an exciting time for fighters of Nigerian heritage," he said. "Looking at [UFC welterweight champion] Kamaru Usman, looking at [UFC middleweight champion] Israel Adesanya, I thought, Wow, I'd love to be the person to really take this home.

"Kalu's first thought was to create a Nigerian MMA organization. His travels to Africa allowed him to survey the fight scene there and to interact with many of the people who are involved in it.

"I spent a lot of time meeting with coaches and fighters, going to dodgy gyms in Lagos, just really getting under the skin of combat sports in Nigeria," he said. "These indigenous sports — wrestling being the one I was familiar with from childhood — are here already. And there's such a rich culture of them.

"He quickly realized that the greatest untapped potential lay in those indigenous fight sports. "Rather than be the poor African cousin of the UFC, of ONE or of Cage Warriors, I thought, I'd love to do something totally different that really speaks to the uniqueness of Africa, starting with Nigeria, and that really plays to our strengths," he said.

Kalu abandoned the notion of importing a version of MMA to Nigeria and realized that an infrastructure was already in place there — it just needed a more professional structure. "With hundreds of athletes competing in dambe and wrestling, the decision was made to showcase these athletes and styles," he said.Thus was born the African Warriors Fighting Championship.

Dambe is a form of boxing that's popular in West Africa. In the bouts, one hand is wrapped in cloth or rope and used for striking. The other hand stays unwrapped and is used for defense. Because it's the lead hand that goes bare, one key way that dambe differs from Western boxing is fighters cannot lead with a jab because that hand is reserved for defense.

In the AWFC, dambe matches last up to three rounds. A round ends when there's a stall in activity, when a participant or the referee calls for a halt, or when a competitor's hand, knee or body touches the ground.

The other main component of the AWFC is traditional wrestling. It differs from the styles of wrestling seen at the Olympics or in American colleges and high schools. In the AWFC, there are no pins, submissions or strikes — which some styles of African wrestling allow. AWFC wrestling spans a maximum of three rounds, with a round ending when the activity stalls, when a participant or the ref calls for a halt, or when a competitor is grappled or pushed to the ground. The competition takes place on sand, with athletes competing barefoot — which is the norm in Africa.

Launching any kind of fight promotion in the 21st century is ambitious enough, but doing so while paying tribute to the past demanded a painstakingly detailed business plan. The first AWFC event took place in May in Enugu State in southeastern Nigeria. Specifically, it was held in a village called Eha Amufu, a center of traditional wrestling. While athletes competed in wrestling and dambe for cash prizes, it was a modest effort designed to test the waters.

It went well enough that a second event was planned for September 14, 2019, in Lagos, the former capital. Kalu called the competition, dubbed the Battle for Lagos, "a step up for us" for a number of reasons. The roster included 20 athletes from different parts of Nigeria, and it was organized in conjunction with the Nigerian Traditional Sports Federation and the Nigerian government.

"We really widened the pool in terms of where we sourced our athletes from," Kalu said. "We had athletes come from various states around Nigeria and really saw a rise in terms of the level of competition.

"While the second show was larger than the first, it was still relatively small by international standards. However, the fact that it took place in Lagos, a city with an estimated population of 21 million, signaled that the AWFC had its sights set on bigger and better things. In addition to being the largest metropolitan area in Africa, Lagos is a major financial center, a city that boasts the fourth highest gross domestic product in Africa. Zooming out, Nigeria has a population of 200 million, which makes it the most populous nation in Africa and the seventh largest in the world. It's predicted that by 2050, Nigeria will be the fourth most populous country in the world.

Simply put, Lagos is where the African Warriors Fighting Championship needs to be. Not coincidentally, it's also where the AWFC will hold its third event, which is scheduled for December. To ensure maximum reach, plans call for it to be live-streamed on the web. (Videos from the first two events have been posted on the AWFC's YouTube channel and Facebook page.)

Making plans for the future of the AWFC and then nurturing them to fruition have morphed into a full-time job for Kalu. While he still does some public-relations consulting, he's abandoned full-time employment in that field to work on his martial arts brainchild.

Kalu is confident that his professional background will help him develop the AWFC and grow it into a world-class fight promotion. His five years in public relations have prepared him well for the tasks that lie ahead.

"Everything that goes into building a reputation or building publicity for a business — I think those skills are applicable to promoting sports," he explained. "These sports, in particular, lend themselves really well to telling stories, to educating people, to telling people about something they haven't heard of.

"He also confessed to having a personal connection with the African Warriors Fighting Championship. "This seemed to be the best chance for me to put my love of my Nigerian heritage [and] my professional experience, which is crafting stories, to use," he said.

"What we're trying to build is a global sporting organization," Kalu added. "I think it's important to bring a level of professionalism to it, especially with the sports that we're working with, which are yet to be professionalized.

"Given that this is an attempt to create something totally new, Kalu acknowledged that much thought has to go into setting standards for the sport, creating stars and generating publicity. No doubt many challenges lie ahead. Launching in Nigeria, a country that suffers from numerous well-documented societal problems, poses some risks. But Nigeria is a young country where the median age is just 18. Clearly, it has great potential.

Decision makers in other countries are beginning to see the light. Kalu has plans to expand in Africa and then to other continents, and the AWFC has begun attracting attention from the likes of the BBC in the United Kingdom and CNN in the United States — not to mention the media in Nigeria. A major documentary on the event is in the works.

In addition, the AWFC is positioned as a Pan-African indigenous sporting organization, which means its leaders are hoping it will become an umbrella entity for the continent's traditional fight sports.

Most encouraging of all is that Maxwell Kalu is just getting started. He exudes as much confidence as any martial artist who's ever poured his heart and soul into a project that could change the world. "That's why I think I'm the man to lead the organization I lead," he said.

Of course, time will tell, but the pieces seem to be falling into place for the African Warriors Fighting Championship. That means the continent's ancient fighting arts soon may take their rightful place on the world stage.

Eddie Goldman is the host and producer of the No Holds Barred podcast. He's covered the combat sports and martial arts for three decades. Read his blog at eddiegoldman.com.

ONE on TNT III gets underway on Wednesday, April 21, in primetime. And this time, the main event is a bantamweight slugfest with title implications.

Lineker has been outstanding since joining the promotion with a 2-0 record, and he is coming off a stellar performance against former World Champion Kevin Belingon. As the #1-ranked bantamweight contender, Lineker hopes to be next for a shot at the gold.

However, this is not a showcase match. Worthen poses significant challenges for the Brazilian.

ONE on TNT III: Lineker vs Worthen Preview