9 Ways You Can Follow in the Footsteps of the Special Forces! 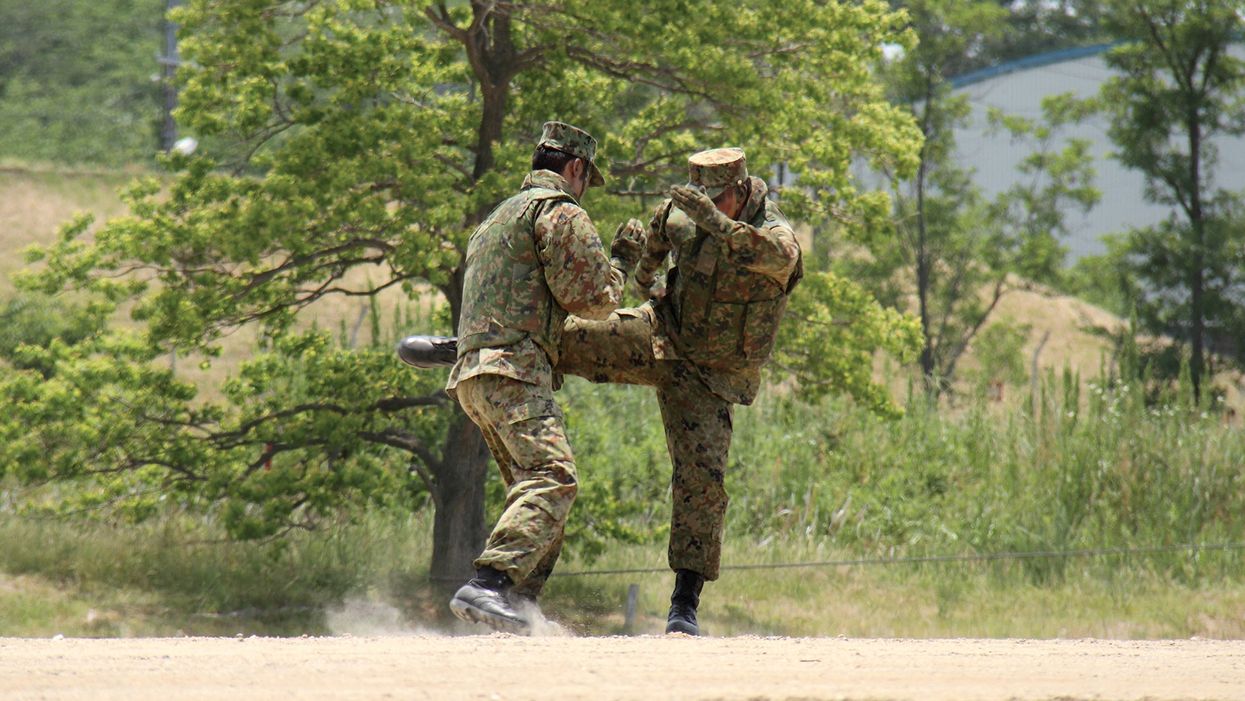 These tips were culled from the author's 16 years with the Special Forces and 11 years as a combatives instructor.

There's No Substitute for Training

Hordes of "masters" line up outside the gates of military bases, claiming to know the magical fighting system and ninja death touch that the Special Forces need. Their sales pitch usually goes something like this: "My techniques are so effective that anyone who knows them can defeat an enemy easily and with very little practice, no matter what shape he's in."

It's a great story, but it's not true. Long ago, the military discovered that the secret to combat effectiveness is training. While there are some little jewels of knowledge that will help you triumph in combat, it all comes down to training — and mostly training in the basics. The difference between a good fighter and a beginner is how well each one knows the basic strategies and executes the basic techniques.

How many times have you attended a self-defense course run by an instructor who brags: "In a real fight, I'd just do this and it would be all over. But we can't practice it here because we'll kill someone"? Next, he'll probably explain that the move has to be done just right or it won't work. That's when you begin wondering, If I can't work on it in training and I have to perform it just right to be effective, how do I prepare to use this deadly weapon in a life-or-death struggle?

That brings us to the second secret of the Special Forces: realistic training. It pertains as much to martial artists as it does to soldiers. Consider Gichin Funakoshi's words of wisdom: "You must be deadly serious in training. Your opponent must always be present in your mind."

You may begin your martial arts development by kicking and punching air, but sooner or later, you'll have to hit something a little more solid. At the intermediate level, you'll find that pounding pads and heavy bags builds your confidence, improves your power and increases your speed. To progress further, however, you'll need to face something that wants to hit you back.

Your workouts also must include an element of fear management and adrenaline inoculation. Unless you train your body to deal with the effects of the adrenaline dump, you may be frozen in your tracks the first time you meet a true threat.

Too many martial arts masters talk about the importance of practicing their techniques and forms when they can't see over their black belts to look at their toes or are unable to finish a two-minute sparring session without risking a heart attack. That leads to the third secret of the Special Forces: conditioning.

Tony Blauer loves to tell his students, "You can't fake endurance." It's a principle he shares with the military. The only way to be ready to fight is to be in shape to fight. When a martial artist says, "I don't run for conditioning because I plan to stay and fight," it can be translated as, "I'm not willing to do what it takes to get in shape." Likewise, those who claim they don't lift weights because it will make them slow are merely making excuses for not having the ambition to learn how to use weight training to enhance their martial arts skills.

America is the land of 24-hour power, plastic money and fast food. It's only natural that Americans want everything delivered immediately. Martial artists are in a hurry to learn, and most of them are in a hurry to be fast.

The Special Forces acknowledge that speed is a devastating weapon in combat, but they also know that the best way to develop speed is to learn technique first. After you have the movements down, you can accelerate your execution of them. But do them smoothly above all else. In the words of Rorion Gracie, "Just relax and do your move."

Make Your Weapon Agree With the Range

Just as you wouldn't use a shotgun as a precision long-range weapon, you shouldn't try to use your body's natural weapons inside or outside their intended range. If you overextend your kicks and punches, you risk losing your balance. If you throw a strike at a target that's too close, you risk getting jammed by your adversary. Using the right tool for the job is important — whether you're Bob Villa or Bruce Lee.

The ability to close the distance, counterattack and evade at precisely the right moment is one of the most important differences between a skilled fighter and a beginner. Being able to close the gap as soon as an opening develops requires timing and the proper manipulation of distance. Moving slightly off the path of a strike or kick while remaining in range to execute your own technique is the essence of mastering distance. Determining exactly when your enemy is vulnerable to a specific attack and moving in to finish the confrontation is the essence of mastering timing.

Military forces are taught to attack where the enemy is weakest. They never limit themselves to one type of battle. More than 2,000 years ago, Sun Tzu wrote, "To take on opponents without being defeated is a matter of unorthodox and orthodox methods," and "Your battleground is not to be made known, for when it is not known, the enemy must make many guard outposts."

Bruce Lee was one of the first martial arts instructors in the West noted for teaching those concepts. He emphasized the importance of being skilled at striking, trapping, grappling and weapons. Being a complete fighter, he said, prepares you for the unexpected because it enables you to function under any circumstances.

To disable any fighting force, you must attack strategic locations. Many military conflicts are won by the overwhelming use of basic tactics against key targets. In this age of high-tech weapons and stealth fighters, the military has rediscovered the value of well-placed shots, but the ugly business of ground engagement is still required to ensure victory.

When it comes to martial arts techniques, it's not how it looks but how it works that's important. Flashy, complicated moves are risky and ineffective in real combat, and they may be easily countered. As Bruce Lee said: "A fight is not static, nor is it bound by rules and traditions. A fight in its most basic form is ugly."

Execute With Speed, Surprise and Violence of Action

When it comes time to begin the assault, the Special Forces forge ahead with 100-percent commitment. They know that to succeed, they need to have trained until their movements are reflexive and instinctive. That's why teams undergo scenario training that teaches them how to respond instantly to virtually any attack.

In the dojo, you should develop techniques you can use for the most common situations that threaten you. Practice until you can execute them automatically and without hesitation.

Don't count on being able to use preplanned responses, however. No attacker will act exactly as you expect. You have to think freely and adjust your technique if it doesn't work the way it did the last time you tried it. Also remember that during the heat of battle, you may not execute your move correctly. Therefore, it's best to avoid techniques that are too complicated or that rely on fine-motor skills. Remember Murphy's Eighth Law of Combat: "No plan ever survives first contact."

Never Give Away All Your Secrets

In modern warfare, the need to keep secrets is called "operational security." It involves preventing people who aren't directly involved in the mission from learning your tactics, techniques and procedures. Its goal is to reduce the chance of information falling into the wrong hands and being used against you and your team.

Throughout the history of the martial arts, masters have had the same idea. They have held back some of their key secrets — called hiden in Japanese — so potential enemies would not be able to use them against the good guys.

As a martial artist, you should be selective in whom you train and the level of techniques you pass on. Today's ally may be tomorrow's enemy.

Randy McElwee is a master sergeant in the U.S. Army. He holds a second-degree black belt in kama bushi kai karate and a first degree in shotokan karate, and trains in JKD and BJJ.

ONE Championship has formally announced its final two live events for 2020, and each will be headlined by ONE Super Series World Championship matches.

The first will be ONE: Big Bang on Friday, December 4, when Roman Kryklia defends the ONE Light Heavyweight Kickboxing World Title against Murat "The Butcher" Aygun.

Also in action, top featherweight contenders Garry Tonon and Koyomi Matsushima meet in the co-main event in Singapore in the hopes of securing a title shot in 2021. Matsushima is the #3-ranked contender in the division, with Tonon not far behind at #5.

The anticipated organizational debut of Amir Aliakbari will also happen at ONE: Big Bang as he meets Russia's Islam Abasov and India's Ritu Phogat clashes with Jomary Torres before the ONE Atomweight World Grand Prix kicks-off next year.

Fellow American Troy Worthen steps back inside the ONE Circle to try, and breakthrough the bantamweight rankings against #3-ranked Yusup Saadulaev as both men try to leave an impression heading into the new year.

Both events will return to the Singapore Indoor Stadium.

As the new year inches closer, ONE looks to be in a prime position to continue its extraordinary string of success with exciting martial arts action.

The final two live events will air free on the B/R Live app.

7 Kickboxing Principles That Will Make You a Better Fighter, Part 1