6 Edged-Weapon Techniques to Save Your Life: Part 1 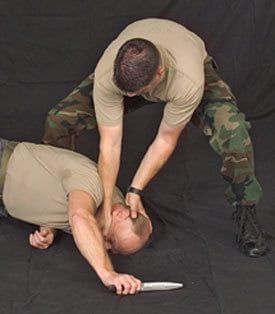 No matter where a person is, chances are a knife is within reach. Think about it. If you're like most Americans, right now at least one of the following items is nearby: a pocketknife, a kitchen knife, a letter opener, a pair of scissors, a screwdriver, a box cutter or a razor blade. Because edged weapons are not only deadly but also readily accessible, martial artists must prepare themselves to survive an assault. This article will assist you in that endeavor by debunking some of the myths associated with knife defense and providing effective techniques for stopping a real blade attack.

Many dojo teach edged-weapon defense. Unfortunately, most of the techniques are designed to work against unrealistic attacks: single, robotic stabs to the midsection and exaggerated overhand stabs that resemble the shower scene from Psycho. Against such attacks, just about any defense will work. You can execute an X-block followed by a wrist lock and several impressive-looking counterstrikes, joint breaks and so on. You can even catch the weapon hand or redirect it by blending with the trajectory of the weapon. Often, the defensive techniques result in the disarming of the assailant. Reality check: Try that with a man holding a razor blade. Our hats are off to anyone who can accomplish that feat against a full-speed, unscripted attack. Sadly, real edged-weapon defense is more complex for a variety of reasons. First, you'd be hard-pressed to find a single, robotic stab outside the dojo. Real attacks are sneaky, fast and gut-wrenchingly violent. Second, most incidents involve multiple stabs and slashes from various angles. To make matters worse, you're unlikely to see the weapon before being cut. Ask anyone who's ever been stabbed, and he'll probably tell you he had no idea he was in a knife fight until he was cut. Based on this knowledge, you must assume that any assailant is armed until you can determine otherwise. Your punch defense must be consistent with your edged-weapon defense because you might not be able to distinguish between the two in the heat of battle. You must also consider that you'll probably be grabbed before you're stabbed. When assailants attack in a stabbing motion, they generally hold you with their free hand to ensure that they can drive the weapon into your body. A grab isn't as likely to precede a slashing attack because penetration isn't as much of a factor. Another major component of the traditional model is the concept of the 12 angles of attack. You're required to spend weeks, months, even years practicing them so you can recognize and identify which angle a real attack might come from. Then you're supposed to master numerous techniques designed to work against a single angle of attack. Remember that having too many choices leads to hesitation, and when facing an edged weapon, hesitation is a luxury you can't afford. If you find this critique of the traditional model a little harsh, locate a committed partner and a training knife with a marking blade, and have him try to cut you at full speed. When you're finished, count the marks. [ti_billboard name="Run-Through"]

Many instructors realized that the traditional model fails to adequately prepare students for a real knife attack and felt compelled to develop what we refer to as the "progressive model." Proponents of this approach advocate minimizing the damage by using your arms to absorb stabs and slashes until you have the opportunity to close the gap and attack the assailant. They profess that you should "expect to get cut in a knife fight." The goal, they say, is to prevent having a vital organ punctured. That sounds logical, doesn't it? While a cut or stab to your arm isn't likely to be fatal, it'll certainly result in a potentially serious injury. After sustaining a few wounds like that, it'll be nearly impossible to use your arms to protect your vital targets, let alone mount an attack of your own. So even though getting your limbs cut or stabbed might not kill you, it can certainly lead to your demise. Some systems that fall into the progressive-model category teach sparring with an assailant who's armed with a blade. You quickly learn that no matter how much you might outclass your opponent, you can expect to get hit eventually. Now, imagine being cut or stabbed rather than punched or kicked. Enough said. Another progressive-model approach is to attempt to grab the weapon arm at the wrist with both your hands or to capture and secure it with both your arms — using the two-on-one defense. Effectively executing either technique is no easy task. But let's assume that you're able to secure the weapon arm. Now what? You're in a position of having to struggle with a thug who's grasping an edged weapon. If he's bigger or stronger than you, you'll probably be taken to the ground in a deadly wrestling match. While you have both hands tied up, he has one free. With it, he can pound you into the ground or grab the weapon and stab you. You'll then have to gain control of his other hand, which now holds the implement of your demise. Edged-weapon defense isn't a give-and-take proposition like sparring. In fact, the term "edged-weapon defense" is really a misnomer. There is no defending against an edged weapon. All there can be is overwhelming aggression. The only thing that will stop a knife attack is your ability to be more violent than your attacker. [ti_billboard name="Head Twist"]

After spending countless hours researching and attempting the most commonly taught edged-weapon defenses, we concluded that the majority work only against a cooperative partner. Neither the traditional model nor the progressive model works against a realistic attack. Through trial and error, we came up with a viable solution to the edged-weapon dilemma. The approach is so simple that it's hard to believe no one else is using it. By avoiding the weapon, taking the assailant's balance and manipulating his head, we found that we could avoid having to perform the most difficult component of edged-weapon defense, which is catching up with and gaining control of the fast-moving weapon. [ti_billboard name="Cross-Face"]

The Weapon Acquisition and Retention Tactics method of knife defense focuses on avoiding the blade by parrying and/or evading it, then acquiring the assailant's head. Once you control his head, you immediately compromise his balance.Stay tuned to read the continuation of this web post in "6 Edged-Weapon Techniques to Save Your Life: Part 2."