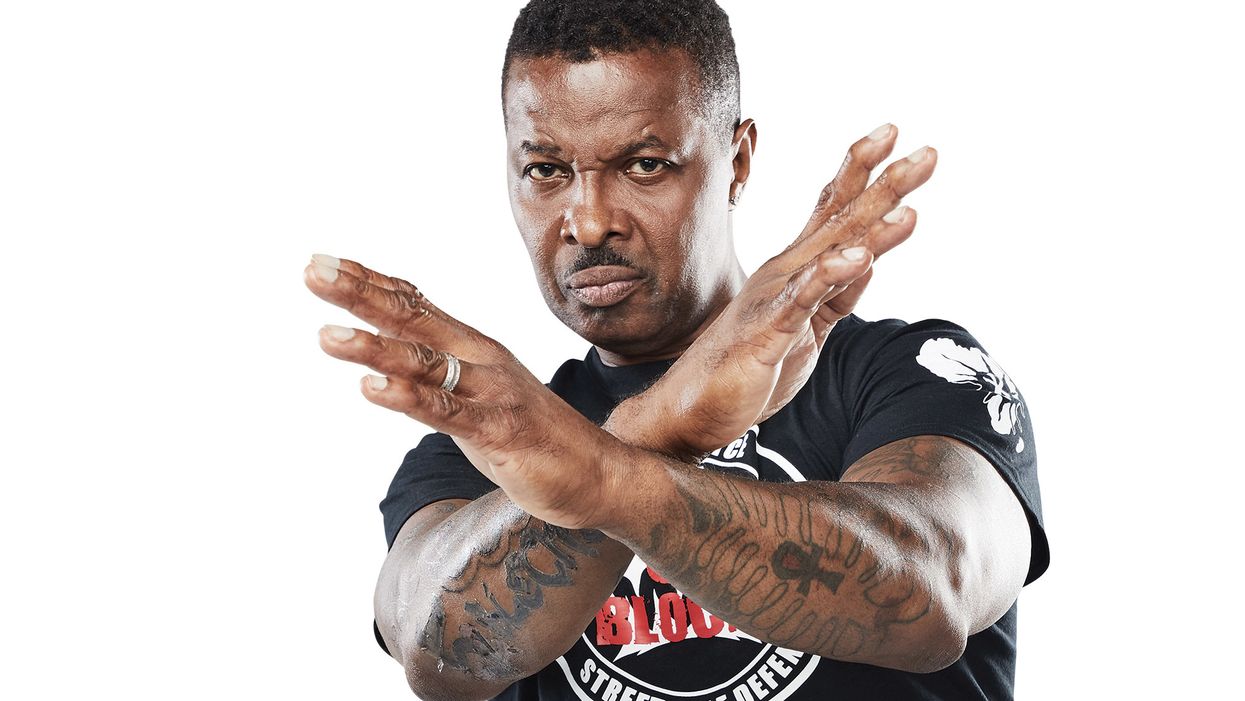 By now, you've heard all about 52 Blocks — especially because we featured the art and its most visible proponent Professor Mo, aka Mahaliel Bethea, on the cover of our June/July 2019 issue. The New York City–based instructor is back in Black Belt, this time to teach seven of his system's trademark techniques.

The hand motion of "roll the dice" is similar to pedaling a bike with your arms. When your opponent reaches out to strike or grab, you cycle so the leading edge of the circle formed by your moving fists goes downward. That brings your fists or forearms into hard contact with his limb, Professor Mo says. "You break down the arm by hitting him near his wrist and farther up the arm. Then you hit his face with one or more backfists.

"You can also cycle up at the end. In that case, your first one or two hits will knock his arm down, and then you would reverse the cycle and come up to strike him under the chin."

When you roll the dice, he warns, don't lower your arms too much or you won't be able to use them defensively should the need arise.

The "dirty bird" is a technique that entails momentarily placing your arms in front of your body with your forearms crossed, then extending your limbs to scissor your hands and hit various targets, Professor Mo says. "It's a quick movement, quick as a bird!

"One part of the body you can strike with it is the neck. In this combination, you swat his arms down as he begins his attack, then use dirty bird to hit him in the neck. At that point, you can grab his shirt at the shoulders and spin him around. Then you pull him backward to get him off-balance and thrust your knee into his back to break his body down. Follow up with a stomp to the back of the knee or the calf."

If you need to continue, you can turn, wrap your arm around his neck and apply pressure, he says. "You don't have to know any special choke. If he's a lighter guy, you can throw him. If he's a bigger guy, you might choke him out right there using his own bodyweight."

In 52 Blocks, you avoid going to the ground whenever possible, he cautions. "You're not falling in love with your opponent."

Also, it's good to change directions as soon as possible because you don't know who's behind you. Changing directions means you can immediately look for other attackers."

The name of this technique stems from the rapid lateral hand motion that's used to effect an eye strike, Professor Mo says. "You can 'shuffle the cards' with both hands or with just one."

As with most defensive responses, you begin with a block designed to stop the initial strike. In this example, you simultaneously use your free hand to execute the eye strike from right to left, targeting one or both eyes. You can follow up by forming that hand into a fist and punching the opponent in the face or neck, Professor Mo says. "In a different scenario, you could use a punching combination or an uppercut."

The goal is to temporarily blind the other guy. To do that, you can use a single shuffle or a double. When he can no longer see, it's much easier to strike him or take him down."

This 52 Blocks technique is composed of four individual moves: the jab, cross, spinning backfist and ridgehand, Professor Mo explains. "So you hit the guy four times. The best target for the final phase is to use the ridgehand to go for the point below the ear, but even if you miss, you have the forearm going across the neck, which is very effective."

The key to making the "helicopter" work with maximum efficiency is continuous core rotation during the second half of the sequence, he says. Once the initial block and then the jab-cross combination are unleashed, you start spinning counterclockwise. That rotational energy powers the spinning backfist and continues into the ridgehand.

"This defensive move works because of its two parts," Professor Mo says. "When your opponent jabs, you try to destroy his fist by hitting it with your elbow. At the same time, your open hand — the skull of the 'skull and crossbones' — is there to catch the punch. Instead of just blocking with the arm, the skull catches the fist. Blocking is what 52 Blocks is all about."

Once the punch is stopped, you can redirect the arm to the side, then scoot to the rear of the opponent and choke him, he says. "Remember that this is a close-contact street-fighting style. We do a lot of chokes while standing up.

"One footnote: You're not just stepping behind him and choking. You actually hit him in the throat with your forearm when you're getting into position and then choke him. In essence, he gets hit twice."

If the attacker opens with a wild punch, you "raise the gate" by placing your arms in front of your head with your forearms held vertical, Professor Mo says. This action forms a hard barrier the opponent must pass if he is to strike you.

A recommended follow-up is to immediately execute a cross and a spinning elbow. Once again, the sequence takes advantage of continuous core rotation, this time in a clockwise direction.

"Remember that when you raise the gate, you should think as though you're attacking his arm with your elbows or forearms," Professor Mo adds. "Also, the turn you do for the spinning elbow puts you in a position to see anyone who might be behind you."

"You might have seen 'full body armor' in Batman Begins because the art they used — KFM, or Keysi fighting method — does a lot of stuff that's similar to 52 Blocks," Professor Mo explains. "You extend your arms with your forearms vertical, and you turn your body to block. The ability to do that with speed and power is developed through the iron-body calisthenics we do in 52 Blocks, which emphasize turning the hips and hardening the forearms."

This move is designed to work against two punches, he notes. "Your opponent throws his first punch, and you turn to intercept with a forearm. He throws his second punch, and you turn again. At that point, you might step in so you can pick him up and throw him. In 52 Blocks, we like to toss the opponent into a wall or drop him headfirst on the concrete and stomp on him. Why stay on your feet? Because there might be another guy waiting."

Note that the twin blocks of full body armor are intended not only to stop the attacks but also to inflict pain. "When he comes in with the punches, block hard," he says. "Do some damage!"