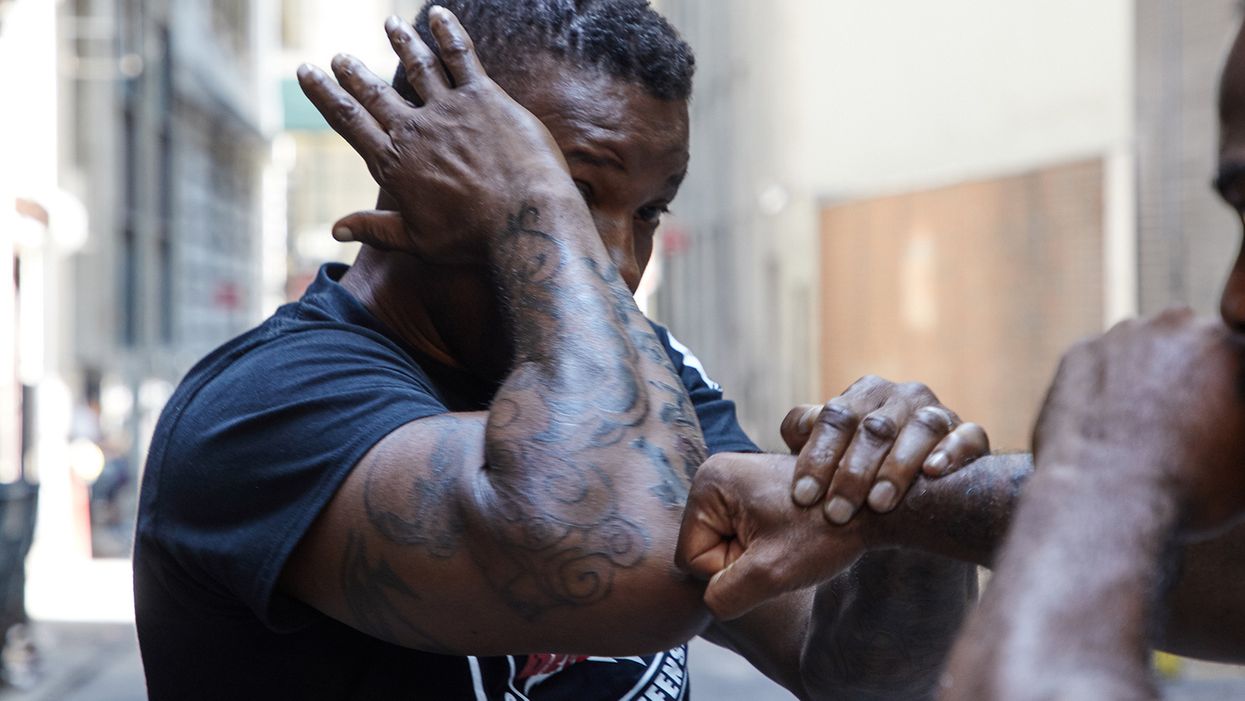 In our June/July 2019 issue, we highlighted Professor Mo, the prominent New York City-based teacher of 52 Blocks, on the cover. It sold so well that we decided to run a follow-up feature in the June/July 2020 issue of Black Belt. In the second story, Professor Mo teaches 7 fighting techniques from the African martial art. At his photo shoot, he also demonstrated a technique called "cover the bullet." Unfortunately, we didn't have room to include that technique in the magazine. Which is why we're posting the video here.

Black Belt: And is 52 Blocks the same as Jailhouse Rock?

Professor Mo: Yes. Jailhouse Rock was what they called it before they started using the name 52 Blocks. It's also been called "wall fighting." But over the past few years, 52 Blocks has become the most widely accepted name.

Black Belt: Where did the system originate?

Professor Mo: Some people will tell you it comes from incarceration, but actually it's a very Afrocentric system. But when you look at its history, you find that because of mass incarceration, the fighting system evolved in the jails. Some people mistakenly say that the name Jailhouse Rock means it comes from the jails. Most masters of 52 Blocks will tell you that it's a martial art from Africa

Black Belt: Why are so many celebrities doing 52 Blocks?

Professor Mo: Ludacris did a fight scene in Fast and Furious using 52 Blocks. Larenz Tate did a film called Gun Hill that featured 52 Blocks. I think they like it because it's an Afrocentric martial art. They want to study an art that's relevant to them. The thing about 52 Blocks is that a lot of people grew up with it. The public doesn't know it, but for many people, this was our first martial art.

When I was a kid, I saw a Jerome Mackey commercial on TV. Mackey was the first guy to have a commercial. He was franchising martial arts schools — the big time. I asked my mother to take me there. She said, "We can't afford Jerome Mackey. Go see your uncle."

So I did. What did my uncle start showing me? 52 Blocks. People love it because their uncles and cousins talked about it. I've had grandfathers come to my dojo with their grandsons and do 52 Blocks together.

Professor Mo: Of course! I was Wesley Snipes' bodyguard. It was fun because we were two martial artists who loved to train — and by the way, he's a real martial artist with several belts and he's really good. His introduction to the martial arts was 52 Blocks.

In the past, we didn't think people would understand 52 Blocks, so we always said, "Yeah, I'm a karate guy." Many of us never wanted to be identified with the jail thing. We didn't want to have to debate people about it. But then my instructor Reno Moralez told me, "This is an African martial art, and you need to put out a video on it." So, being an obedient student, I did.

The point I'm trying to make is that Wesley Snipes might not have said in the beginning, "Yeah, this is 52 Blocks," but he knows the art. In the past, people would refer to it as street fighting. They would say, "Yeah, I do karate, jujitsu and street fighting." The street fighting always represented 52 Blocks. Now it's finally being uncovered, and people like me are working hard to give it a name. We're thankful that Black Belt magazine is giving it a name.