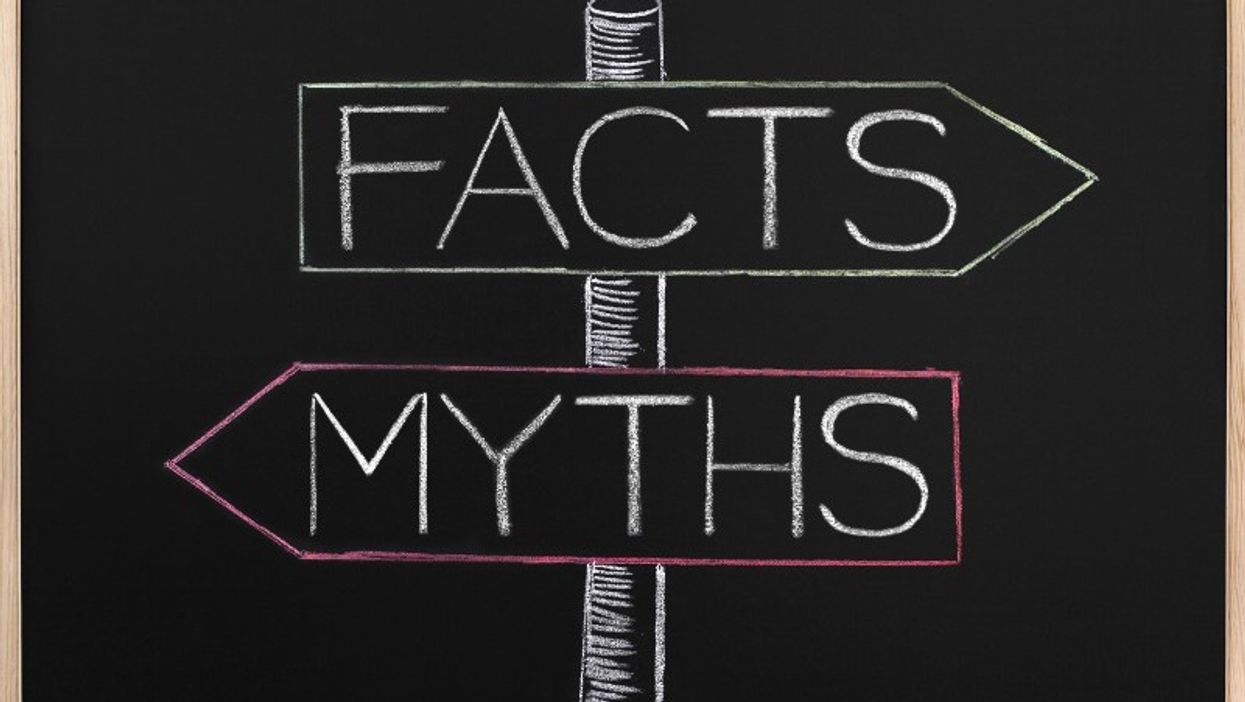 There are plenty of myths swirling around martial arts. And I don't just mean the superstitious variety. I mean misconceptions and mistaken beliefs that have somehow gained status as facts. These are annoying at best. At worst, they keep people away from training in martial arts – people who otherwise would have benefited from everything the martial arts have to offer.

Here are some of the most common myths about martial arts. My hope is that, even if you already know them all, this post gives you insight on how better to debunk these myths for those outside the arts.

This, sadly, is one of the most persistent myths about our industry. I'm going to address it in two parts: children and adults.

When it comes to kids, parents may be afraid that martial arts will teach their child that fighting is a solution. Or, they think that putting a child who already has aggressive tendencies or behavioral issues into martial arts will worsen the problem. These things could not be further from the truth. Not only does martial arts emphasize non-violent problem solving (except as a last resort), the values they instill in children are all contradictory to bullying. The physical activity also provides an outlet for rowdy children, making it less likely that they will act up elsewhere, like at school or around younger siblings.

While some parents worry about their child becoming a bully, some adults hesitate to join martial arts themselves because they assume they'll be surrounded by bullies. After all, won't angry, brutish people be drawn to an activity that lets them beat up others for fun?

However, the martial arts training environment is not conducive to rude, manipulative or aggressive behavior, for three reasons: One: Not all, but many, adults who train in martial arts have grown up in martial arts, and have already been molded by the high moral standards set in dojos. Two: An untrained adult who enters a martial arts school with a bullying attitude will quickly find him or herself at the mercy of better-trained students who are more than able to resist attempts to push them around, as well as coaches who have no tolerance that kind of behavior.

Three: Because of the positive environment set by martial arts, someone who is rude, or bullying – simply put, a jerk – will be the odd man out. Being the only jerk in a room full of nice (non-pushover, fully-capable-of-breaking-your-arm, zero-tolerance-for-bullying) people, will get old. Most jerks quit on their own.

(Unfortunately, there will always be a few undercover jerks, or jerks with a high tolerance for nice people. You'll find them in every segment of the population: among doctors, engineers, librarians, and, yes, among martial artists. But I'd bet that there are far fewer in dojos than there are in corporate offices!)

2. Martial arts are all about kicking and punching.

This is a weird one, but I've still encountered it multiple times. It's so obviously wrong, and it stems from people who either A) know nothing about martial arts, or B) are looking for the quickest way to dissuade their child from joining ("Judo? Oh, no sweetie, you wouldn't like that – you'll get hit in the face.").

However, there are martial arts that don't use punches or kicks at all. Judo focuses on takedowns and throws. Brazilian jiu-jitsu focuses on chokes and joint locks. Wrestling is similar, in that the goal is to take down and pin your opponent. In all three, any sort of punch or kick is banned.

On the other end of the spectrum, there are plenty of martial arts that encompass far more kinds of striking than punches and kicks. Muay thai utilizes elbows and knees, and many Korean, Chinese and Japanese arts use the knife hand strike – not technically a punch, since it's made with a stiff open hand rather than a fist.

Other martial arts (usually the self-defense-oriented ones) get really crazy with what moves you learn. Forget punches. We're taking eye gouges, clawing the eyes, biting someone's face off – that sort of thing.

3. You're guaranteed to suffer major injuries when you train in martial arts.

I know plenty of martial artists in their 40s and 50s who have spent their lives training and made careers in the industry – and on the surface, you'd never tell. There are no gaping scars, no missing limbs, no eye patches. Most importantly, none of them speaks with the punch-drunk slur of Sylvester Stallone.

That's the biggest concern with martial arts training: that it will lead to head injuries and brain damage. However, a 2009 report by the American Association of Neurological Surgeons didn't even place martial arts in the top 10 sports-related causes requiring emergency room visits for kids 14 and under, and the arts didn't even make the top 20 overall list. What did? Among other things, golf, trampoline jumping, ice skating, and, of course, football. There's actually some science that suggests professional MMA fighting might be less dangerous than pro football, and there's plenty of anecdotal evidence to support the claim.

Yes, little bumps and bruises happen all the time. But if you're going to let that be a deterrent, you might as well spend your life inside your house, encased in bubble wrap. Not to mention, most people who train in martial arts aren't doing it at the level of pros. That makes a huge difference in the level of risk incurred.

DISCLAIMER 1: Boxing. Hoo boy. According to just about every Internet source I could find, serious boxing training and/or a boxing career is one of the best ways to ensure you get some of permanent brain damage. So, mammas, don't let your babies grow up to be professional boxers, I guess.

DISCLAIMER 2: Like literally any physical activity, martial arts comes with a risk of injury. However, you can mitigate the risks by using the correct equipment for sparring, knowing your own limits, and not overtraining. If you're worried about your child getting injured, talk to their martial arts coach. They're probably already taking more safety precautions than you even realize.

4. There's no point in training if you're not going to compete or fight.

Actually, competition and fighting are among the least-common reasons people sign up for martial arts! No matter what how old you are when you begin training, martial arts has a ton of benefits. Parents may sign their kids up for martial arts so they learn valuable life skills. Others may take up training as a way to reap the benefits of exercise. Some train martial arts in order to learn how to protect themselves. Some people just train because it's fun!

If you're worried that you'll show be surrounded by serious competitors, or that you'll be judged for not wanting to join them, don't be! Martial artists realize that not everyone has the same reason for training. Most gyms or dojos will offer a variety of class options, anyway: for example, there might be a kickboxing class dedicated to form and technique and another dedicated to sparring. People who want to fight competitively would take both, but recreational martial artists would only take the first.

5. Martial arts training is "the great equalizer" that will automatically let any small or weak person take out larger, untrained opponents.

Ha ha! I wish, but this is only partially true.

The reality is, in a one-on-one fight, the larger, stronger person will always have an advantage. The larger the discrepancy in size and strength, the larger the advantage. Training and experience can offset it to a degree, but the level of expertise it would take to completely neutralize all size/strength advantages so great, it's virtually unattainable.

This does not mean that martial arts training is useless for self-defense. But when (non-martial-arts) people picture a "martial arts fight," they tend to envision a grand Hollywood-style scene, with one lone hero fighting either an entire army or just Hafþór Júlíus Björnsson, both of which are equally terrifying prospects. The hero then single-handedly defeats them, thanks to a mix of their super-intense training and indomitable will

This does not happen in real life. Here's what can happen: someone intent on doing you harm grabs you, in your house, on the street, in an empty parking lot late at night. Your split-second reaction is to strike, or knee them, or jab a finger into their eye. Your muscle memory tells you how to grab their wrist to break their grip, or how to twist to throw them off you. Then – you run like your life depends on it. Which it might.

You're not shooting for a heroic victory here. You're definitely not sticking around to sign autographs, or posing, arms raised, one foot atop your vanquished foe. Maybe you haven't even inflicted any lasting damage on your attacker. But if you've surprised them enough to make one just one move that lets you get away, that's all that matters.

What are some crazy things you've heard about martial arts, or your art in particular? Let us know in the comments!

On the men's side, Giancarlo Bodoni won a referee's decision over Lucas Barbosa to capture the heavyweight black belt division after losing to Barbosa in the finals last year. But Barbosa turned around and defeated Bodoni 4-0 in the semis of the open weight class on his way to capturing gold in that division.

In a back and forth battle, Charles Oliveira finally claimed UFC gold winning the lightweight title against Michael Chandler in Houston, TX Saturday night. And Oliveira, the UFC's all time submission king with 14 wins via that route, did it on his feet knocking Chandler out in the second round.

The Brazilian opened with low kicks but Chandler quickly took the fight to him scoring a damaging left hook. He then dropped to the ground attempting a guillotine choke but Oliveira worked out of it to take Chandler's back. The American was eventually able to explode out of the position and regain his feet though, from there raining punches down on the prone Oliveira.