25 Facts About the Filipino Martial Arts 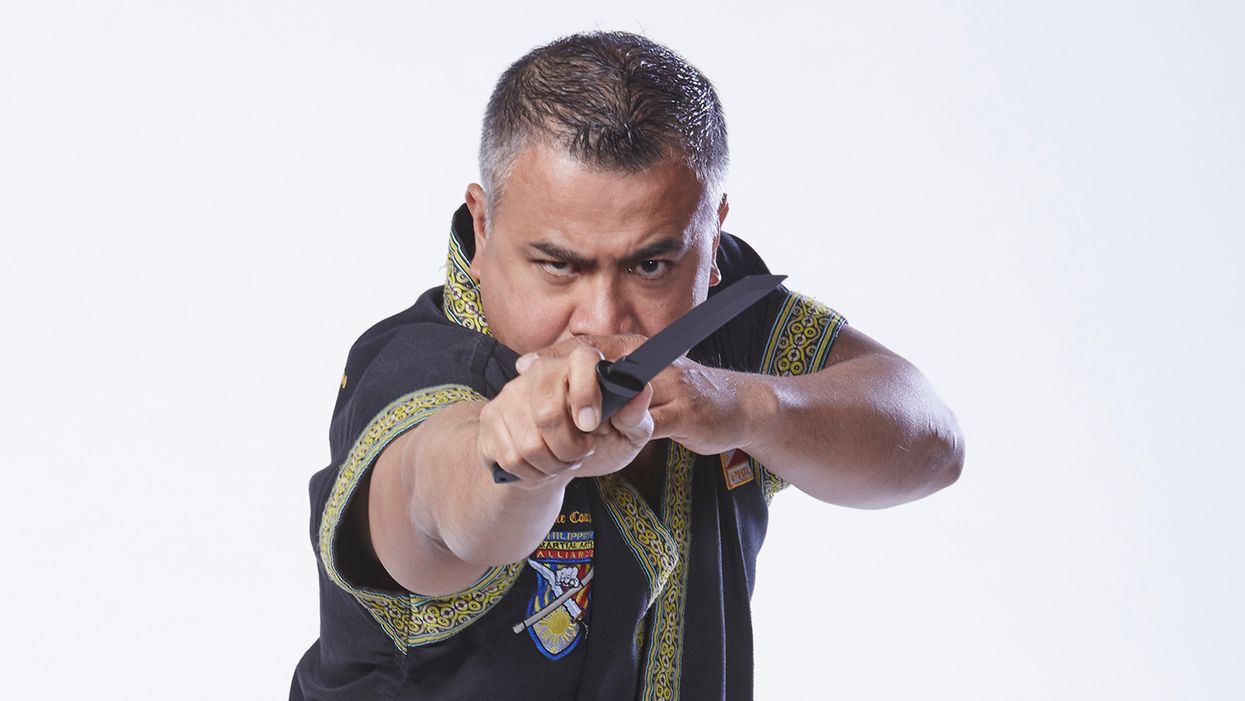 In recent years, the popularity of kali/escrima/arnis has skyrocketed among law-enforcement officers, as well as the general public. Experts believe the reason is threefold: The traditional Philippine systems offer all the benefits of the other Asian martial arts, wielding weapons provides a fine aerobic workout and, taught right, they serve as a functional form of reality-based self-defense. For all the essential facts on the stick styles, we asked Black Belt Hall of Famer Julius Melegrito to weigh in. Here are his observations.

• Most untrained people see a weapon as having one attacking feature. With a little education, however, they learn that all parts of a stick or knife ― the tip, the body and the butt — can be used to attack.

• Awareness of the versatility of blunt and edged weapons is more common in the Philippines and among those who practice the Filipino martial arts, but it can be learned quickly by any martial artist.

• At close range, use the punyo. It can be devastating for gouging or striking.

• At midrange, use the katawan. In self-defense, it's best to aim for vulnerable areas such as the neck and face. Police officers are reluctant to inflict serious injury, however, so they might target the body.

• When they're not allowed to strike, police officers like to place one hand on each end and extend their arms to shove away an attacker. If need be, they can quickly switch from that orientation to a one-hand grip and strike.

• At long range, use the tip. It's by far the most devastating part of the weapon. If you smack your opponent with the first three inches of the stick, he'll suffer the most damage because it's the fastest moving part. It's also the part that's nearest to him, which means it's very quick to bring into action.

• The stick represents an extension of the human hand. So, putting the anatomy of the stick into more familiar terms, you get the following: Using the punyo is like nailing someone with an elbow strike, using the katawan is like chopping someone with a forearm strike and using the dulo is like jabbing your thumb into someone's eye.

• As lethal as one stick can be, two are even better — assuming that you know how to use them. Because wielding two is tough, most practitioners prefer single-stick techniques. Their reasoning is simple: You'll rarely find yourself in a fight in which you have two sticks or two sticklike objects in your hands.

• The counterpoint: What if you have one stick and the guy you're fighting has one? If you manage to disarm him, you'll end up with a pair of weapons. What will you do now? Throw one away because you don't know how to use two?

• To be fair to those one-stick enthusiasts, disarming an opponent can end with him dropping his weapon. You may or may not have an opportunity to pick it up and use it.

• The bottom line: You don't need two sticks to fight, but if you have them, you might as well use them. Not doing so is like telling an opponent that you're going to fight with only your right hand and not your left.

• To cover all the bases, practice your stick techniques with both hands even if you opt to learn only one-stick moves. Pay particular attention to strengthening your nondominant hand. Doing double-stick drills does that, as well as a number of other things. It also enables you to continue the fight if your dominant hand gets injured.

• Taking that line of thinking to the logical extreme, make sure you also practice shifting from single- or double-stick mode to empty-hand mode in case you're disarmed.

• Real fights that involve sticks are very different from stick-fighting matches. On the street, you can hit your attacker with the punyo. Imagine driving the butt of the stick into a person's neck. The hard cross section, combined with the mass of the stick and your swinging arm, can lead to a knockout.

• At a higher level in the Filipino martial arts, you learn to use your opponent's body to trap his stick. If you and your opponent are at close quarters in competition, often the referee will separate you to ensure that you both have enough space to maneuver. In a real fight, however, not having room to maneuver can be a good thing, especially for police officers facing stick-wielding thugs. Their goal is often to grab the enemy's hand and weapon.

• For traditionalists, grabbing a stick is a big no-no because the stick represents a sword. In reality, however, it's not a sword; it's an impact weapon. On the street, it can take the form of a police baton, a bat or a beer bottle that's about to be smashed over your head.

• There are two schools of thought in the stick arts: The traditional one holds that sticks are for slicing, not hitting. The perception is evolving, however, and more people are teaching that sticks are just as suitable for hitting. It's more practical.

• Fancy twirls are fine, but you should know that twirls come from slashing movements that originally used a blade. If you really want to slice, get a knife or sword and practice your moves. Reserve the stick for hitting. It's an impact weapon.

• Once you've accepted that truth, you'll find that a wide range of objects can serve as substitute sticks. Police officers use batons and clubs. Civilians might pick up a water bottle or a flashlight—items you can carry on an airplane.

• Most improvised impact weapons have essentially the same parts as a kali stick, even if you can't use them exactly the same way. For example, you can use the tip of your car keys like a dulo or a water bottle with its cap on like a punyo.

• One of the forgotten tactics of stick fighting is using your opponent's weapon against him. If a guy is holding a bat near your face, you don't have to trap his hand. You can grab hold of the bat and maneuver it to shield yourself from any punches he launches with his free hand.

• Although the Filipino martial arts teach that a weapon is an extension of your body, the average attacker takes it one step further: He believes that his weapon is part of his body. He'll do anything to keep it. For him, letting go of the weapon means he loses his advantage. If you know what you're doing, though, his obsession with keeping it can become a disadvantage.

• That's not to say you should immediately give up your weapon if your foe grabs it. Police officers learn a number of weapon-retention techniques for situations in which a suspect grabs their baton.

• However, it pays to keep things in perspective. If an officer is fighting a guy and they're both muscling for control, the cop might want to let go and target the man's face with his fists. The element of surprise might make it easier to take him down and restrain him. Giving your enemy what he wants is sometimes the best way to defeat him.

About the authors: Julius Melegrito is the founder of the Philippine Martial Arts Alliance. He operates a chain of schools in Bellevue and Omaha, Nebraska. Ed Pollard is a former assistant editor of Black Belt.

The Traditional Stance of MMA (And Other Combat Sports)