11 Most Memorable Moments From Season 1 of Cobra Kai 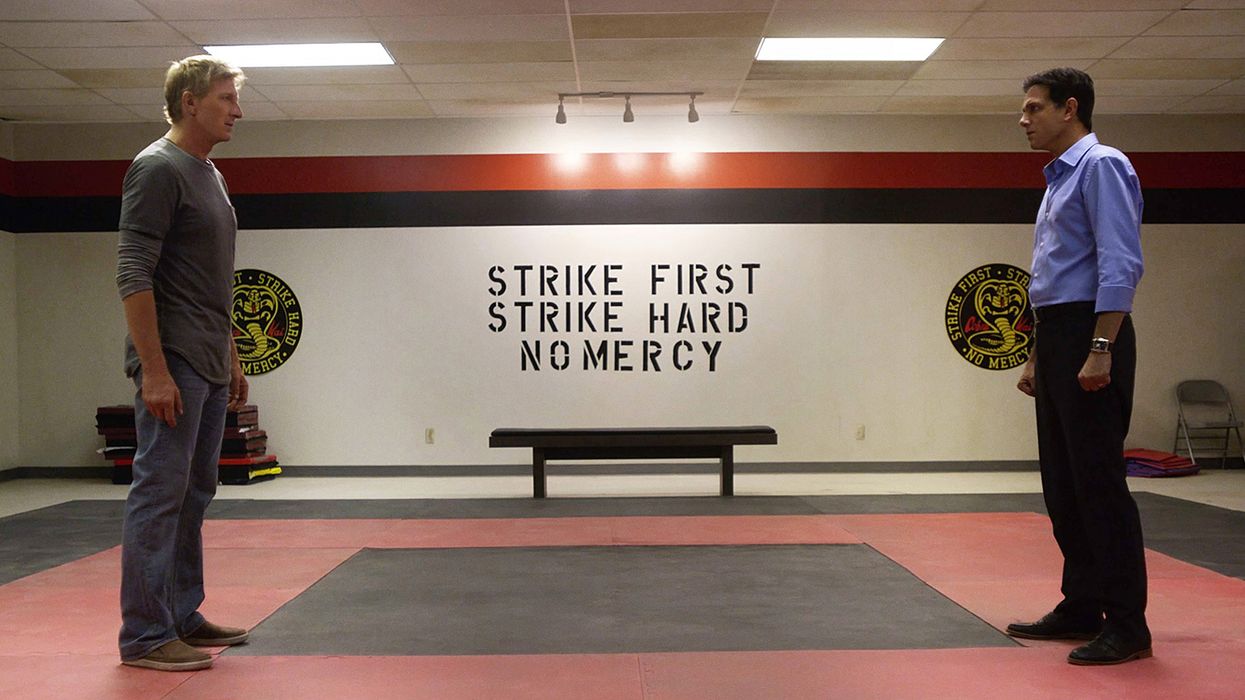 From the moment it started life on YouTube Red in 2018 and, one hopes, as it matures on Netflix starting in 2021, Cobra Kai has managed to grab us by the gi, pull us in close and score a point — repeatedly. The Karate Kid sequel series does this by strategically using archival footage from the original films, by providing its characters with well-written dialogue and by setting up scenarios that tug at the heartstrings of even hardened martial artists.

I arrived at this conclusion while binge-watching Cobra Kai Season 1 for the third time to make this list. The following are my selections for the most memorable moments, presented in chronological order.

The story opens with the climax from The Karate Kid: Cobra Kai's Johnny Lawrence takes on Miyagi-do karate's Daniel LaRusso at the All Valley Under-18 Karate Championship. Present are the obligatory sound bites that have found their way into American pop culture, including "Sweep the leg" and "Get him a body bag!" Naturally, they're followed by the crane kick.

The transition is brilliant! Johnny from 1984 is shown face down on the mat after the kick heard round the world. The scene dissolves into one that shows Johnny in the present, face down on the carpet after a night of hard drinking.

Johnny Lawrence (William Zabka): "It was an illegal kick."

Daniel LaRusso (Ralph Macchio): "What about that elbow to my knee?"

Johnny Lawrence: "I got a warning. You got the win."

Johnny Lawrence to his new student Miguel Diaz (Xolo Maridueña): "Quiet! We do not train to be merciful here. Mercy is for the weak. … What is the problem, Mr. Diaz?"

Miguel Diaz: "Hey, Sensei, is there any particular way you want me to wash these windows?"

Johnny Lawrence: "Nah, I don't give a shit. Whichever is easiest."

A Halloween dance is about to take place at the high school. Miguel Diaz is planning to wear a less-than-cool costume his grandmother made.

Johnny Lawrence: "I can't let you go out like that. We have a reputation to uphold."

Miguel: "What do you suggest?"

Quick cut! Out of a cloud of mist in the school's gymnasium, Miguel appears wearing — you guessed it — a skeleton costume.

A frazzled Daniel LaRusso visits the grave of Mr. Miyagi (Pat Morita). "It's funny, when I was a kid, you seemed to always have all the answers. I guess I thought when I got older, I'd have it all figured out, too. But now, I feel like I'm clueless. Lately, I've let my anger take control."

Old footage of Mr. Miyagi: "Daniel-san, you remember lesson about balance? Lesson not just karate only. Lesson for all life."

Johnny Lawrence: "Since you joined Cobra Kai, I have been hard on you. I've called you names. Some of you I've hit. And for that … I don't apologize. Cobra Kai is about strength. … And right now, you're all weak. And I know that — because I was you.

"Fear does not exist in this dojo, does it?

"Pain does not exist in this dojo, does it?

"Defeat does not exist in this dojo, does it?"

It starts in full annoyance mode. Robby Keene (Tanner Buchanon) is doing various tasks at the car dealership, including washing the windows, sweeping the floor and, yes, waxing the cars. And Daniel LaRusso corrects every movement he makes.

Robby (angry): "I thought you were gonna teach me karate!"

Daniel (to himself, after Robby has stormed off): "God, I love this part."

Daniel (in the dojo, teaching Robby): "Show me wash the window. Show me wax on, wax off."

Johnny Lawrence and Daniel LaRusso are test-driving a car, bonding over an REO Speedwagon song. They stop at Daniel's old apartment.

Johnny: "I remember — I kicked your ass around that corner."

While having a drink, Johnny talks about his abusive stepfather. Daniel mentions that his father died when he was a kid. Each managed to find a sensei to take the place of his missing dad.

Best Fights (throughout the season): the scuffles involving Johnny Lawrence

Best Lines (throughout the season): the ones delivered by Johnny Lawrence

Best Guest (Episode 8): I'm not going to tell you the name. Watch it for yourself.

Cobra Kai UniformEver wanted to be a part of the best worst dojo in karate cinema history? Now's your chance to get the look of a Cobra Kai member with this authentic replica uniform (sorry, we hear Sensei Kreese is retired, though)! The sleeveless gi top features a patch with the iconic Cobra Kai insignia on the back. Pants have an el
$84.99
Buy Now
From Your Site Articles
Related Articles Around the Web